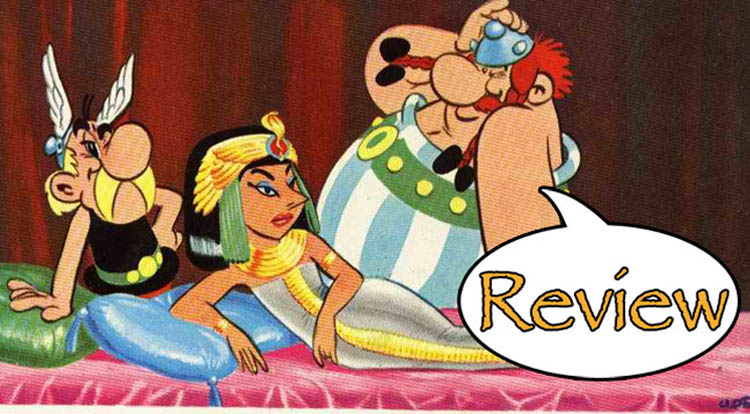 Way back in the day, my grandparents traveled to Europe and when they returned, they had a treasure chest full of gifts to hand out to the good grandkids.Â  While I dug my own nutcracker, the family coo-coo clock, and enough foreign sweets to set me down the path to a future cavity, the one gift that amazed me the most was a German language version of Asterix and Cleopatra.Â  For years, I poured over those pages taking in every lavish panel, and sadly, not understanding a word of it.Â  It wasnâ€™t until just a few months ago, that I had the chance to get an English adaptation of the classic work.Â  Did the translation live up to the 20 years of what I had built up to be a great comic story?

For those of you not familiar with The Adventures of Asterix, the title character and friends (mostly his overweight best buddy Obelix) were created by French writer Rene Goscinny and illustrated by Albert Uderzo.Â  The series first began in 1959, with the most recent installment arriving just a few years ago in 2005.Â  The series follows a village of ancient Gauls as they fight against Roman occupation.Â  They do this through brute strength and magic, the later provided by Getafix, a local druid, who can whip up a potion that gives the imbiber super-human strength.Â  This goes a long way in their battle against a military might sweeping across Europe.

In the story of Asterix and Cleopatra (a take on the Shakespeareâ€™s Anthony and Cleopatra), Cleopatra is outraged by comments Caesar makes against the Egyptian people, and bets him she can build a grand palace for him in three months.Â  She summons Edifis, the greatest architect in the land and tells him if he can complete the task, heâ€™ll be a very rich man, if not, itâ€™s off to the crocodiles.

The worried Edifis travels to the Gaul village, and Asterix, Obelix, Getafix, and their dog Dogmatix, agree to help.Â  With the use of Getafixâ€™s magic potion, the workers make record time on the palace; that is until Caesar finds out, and sends his troops to lay siege to the building.Â  Even though the Gauls are able to fight the Romans off, the palace is in ruins, and it looks like Cleopatra is going to lose the bet – and Edifis is going to be a meal for the local Nile wildlife.
Fortunately for all, Dogmatix, with the help of Asterix, is able to deliver a message to Cleopatra about the battle, and she arrives just in time to catch Caesar in the act.Â  Forced to admit wrong doing, the Roman soldiers are required to fix the damaged structure.Â  They do, and the work is completed by the deadline.Â  Edifis becomes rich, and the Gauls make their way back home.

While the story may sound like a grand adventure, it is the site gags and humor that are the key to making this a successful tale.Â  You really have to pay attention to Goscinnyâ€™s writing to catch all the little in jokes.Â  For example, at one point a scribe is said to speak several living languages, but today all those languages are considered dead languages, and the Egyptian language is all spoken in hieroglyphs.Â  The art too is filled with delicious little nods to pop culture – especially pop culture of the 1965, when this issue was released.Â  The cover image is a direct homage to the Elizabeth Taylor, Richard Burton Cleopatra movie that came out in 1963.

The version Iâ€™ve reviewed is adapted by Anthea Bell and Derek Hockridge, and as far as I can tell, the story is as faithful in the adaptation as you can get.Â  The closest thing I can compare it to is the 2002 adaptation of the movie, subtitled from French, which has similar dialogue throughout the film.

Iâ€™m surprised Asterix isnâ€™t as popular in the United States as he is in Europe.Â  This tale is a great read and still holds up 40 years after its original release.Â  If you havenâ€™t read it, it is worth picking up in one of the many different collections out there.Â  Iâ€™m giving Asterix and Cleopatra 5 out of 5 Stars.