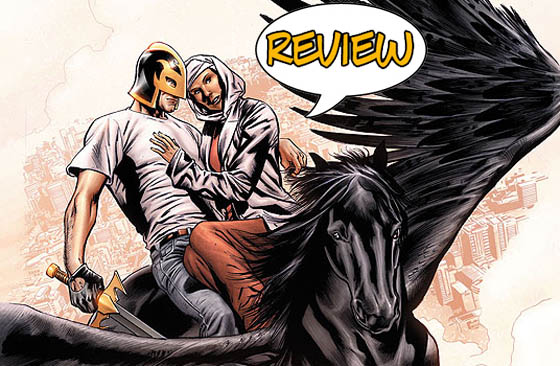 When I was a kid, I used to get irritated when I would read the Defenders because the Valkyrie never got to actually use her way cool sword.Â  It’s an inherent problem with sword-wielding characters, from the Black Knight to the Swordsman to the Grim Ghost, that they can’t just go dismembering people at random.Â  And now, this book has not one, but TWO sword-characters at the same time.Â  I haven’t really been paying too much attention to whether they get to chop up the bad guys, but it’ll be interesting to see how it goes.

Previously, on Captain Britain and MI:13: Pete Wisdom, late of MI:13, once a member of Excalibur, has been given the go-ahead from the British government to assemble the various protectors of the land into one superhuman fighting force.Â  Joined by a resurrected Captain Britain, and possessing the mighty blade Excalibur, the various agents of MI:13 successfully turned back the Skrull invasion of the U.K.Â  ‘Course, it ain’t a miniseries, which means that another menace is almost certainly just around the corner, in the form of the mystic madman called Plokta.Â  Plokkie is apparently the brain-trust behind the mindless ones of the Dark Dimension, and has possessed a block of Birmingham flats to try and capture the souls of those within.Â  He offers nothing less than their very heart’s desire in return, and it’s a bargain that tempts not only the various Joe Sixpacks ofÂ Birmingham, but even the might of Captain Britain himself, as Plokta shows him the whereabouts of his lost wife Meggan….

Plokta taunts Cap with images of Meggan somewhere in space, but he possibly miscalculates, as Britain leaps into action, flying through the portal to save her.Â  Turns out the whole thing was a ruse, as Plokta closes the portal behind him, locking the most powerful of MI:13’s weapons on the wrong side of space and time.Â  The magical blah blah that he has unleashed continues expanding, forcing Pete Wisdom to retreat, while, inside the building, Blade (The Vampire Hunter) and Spitfire (The Vampire) have the kind of discussion that you might expect.Â  Spitfire has the upper hand in the discussion, though, and Blade agrees to set aside his enmity long enough to not die.Â  The Black Knight, Pete, Captain Midlands, and Faiza Hussain enter the apartment building, cautiously trying to find their lost comrades.Â  “Nobody, y’know, think of anything you really like,” warns Pete Wisdom uselessly.Â  Cap wakes his lost wife in the void, while the Blade (who you think would be more understanding of Spitfire’s condition, being half-vampire himself) and Spitfire team up and fight their way through the Mindless Ones.

As the second team moves up the stairwells, Pete Wisdom is possessed by a vision of his greatest fantasy: His dead girlfriend Maureen is back, as is his lost love Kitty Pryde, both of whom seem to be enjoying a three-sided relationship.Â  John the Skrull isn’t dead, and everyone he ever loved is safe and can never again be harmed.Â  Also worth nothing: the head of Lockheed the Dragon mounted on the wall.Â  Heh…Â  The Black Knight responds quickly, smacking his leader in the face, and the foursome is ambushed.Â  As Plokta’s hellfire magic expands, we see Captain Britain’s fantasy, a quiet life, in a quiet home, with a pub of his own, and Meggan happily at his side…Â  until his lost brother Jamie bursts in with a flaming sword and starts busting up the place.Â  Blade and Spitfire climb the elevator shaft together, and Eric (for that is his real name) admits that he, personally, brought vampires back the Marvel Universe.Â  Spitfire is horrified to think that Baron Blood might return, and falls down the shaft.Â  Plokta taunts the Black Knight with HIS dream of putting away the blood-craving Ebony Blade forever, and the Knight flips out, chopping up monsters, and preparing to turn his blade on Faiza.Â  “WHITMAN!” cries Pete Wisdom at the last second, “That’s NOT the Ebony Blade!”

This series reminds me of the recently-departed Checkmate, in that it has a lot of characters who have played relatively minor roles in other series, working together with a common goal.Â  Writer Paul Cornell does make it a very British book, which is a definite plus for Marvel.Â  Too often, their heroes all seem to be stuck in New York together.Â  The art, by Leonard Kirk, is very well done, though I’m not too keen on the Black Knight’s t-shirt, jeans, leather jacket and giant heraldic helmet combo.Â  Faiza Hussain is turning into an interesting P.O.V. character, but this issue, while interesting, feels a bit rushed.Â  Perhaps it’s just a matter of the pacing, but I might have wanted more “Heart’s Desire” scenes interwoven in, and more time devoted to Blade and Spitfire.Â  Over all, though, it’s an interesing issue of one of Marvel’s more eclectic titles, and keeps me interested in coming back next month.Â  Captain Britain and MI:13 #7 earns 3 out of 5 stars, with the hope that they manage to keep the book from stagnating, or turning into yet another “gang up a bunch of characters to keep them out of the public domain” books.Â  Yes, New Warriors, I’m looking at you.