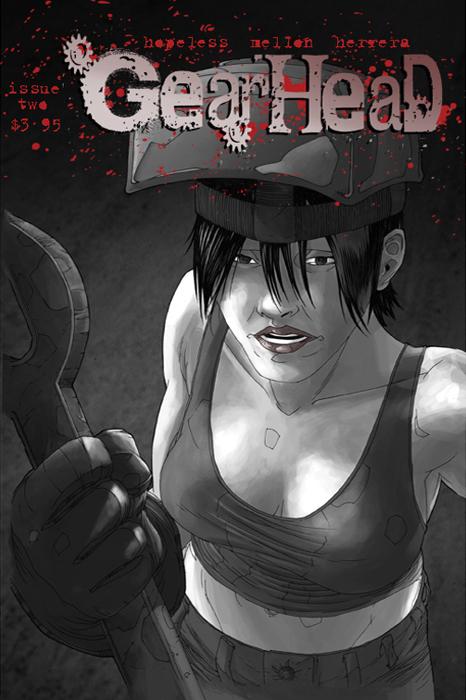 LOS ANGELES, November 19, 2008Â  â€“ Gale Anne Hurdâ€™s Valhalla Motion Pictures has closed a deal for the film rights to produce the graphic novel GEARHEAD which Hurd will produce.Â  GEARHEAD was created by Dennis Hopeless and Kevin Mellon and published by Arcana Comics.

In GEARHEAD, a young woman teams up with a group of rebels to fight the corrupt superheroes who govern the United States.Â  She must rise to the challenge of her destiny and become GEARHEAD.

â€œWe are excited to bring GEARHEAD to life.Â  Itâ€™s a terrific character-driven story set in a unique and compelling world,â€ said Hurd.

Gale Anne Hurd and Valhalla Motion Pictures most recently produced the blockbuster feature The Incredible Hulk for Marvel Studios which was released by Universal Pictures this summer.Â  Valhalla is continually developing a broad range of projects, including Marvelâ€™s Punisher:Â  War Zone for Lionsgate and Sony Pictures Entertainment which stars Ray Stevenson and is being released on December 5, 2008.Â  Hurd has produced more than two dozen feature films that have generated billions of dollars of revenue.Â  Her other credits include The Terminator, Aliens, Armageddon, Aeon Flux, The Punisher, Terminator 2:Â  Judgment Day and Terminator 3:Â  Rise of The Machines among others.

Arcana Comics has published over 150 original comics and books and is a division of Arcana, an award winning transmedia company founded by CEO and owner Sean Oâ€™Reilly.Â  Arcana establishes new brands and intellectual properties with engaging storytelling and compelling visuals through comic books, graphic novels, animation, short-form live-action, video games, toys and now, feature length films. Arcana has created original brands they control such as The Clockwork Girl and Kade, and have further developed existing brands for Disney, Sony, Capcom, HBO and more.