By Stephen Schleicher on November 5, 2008 0 Comments 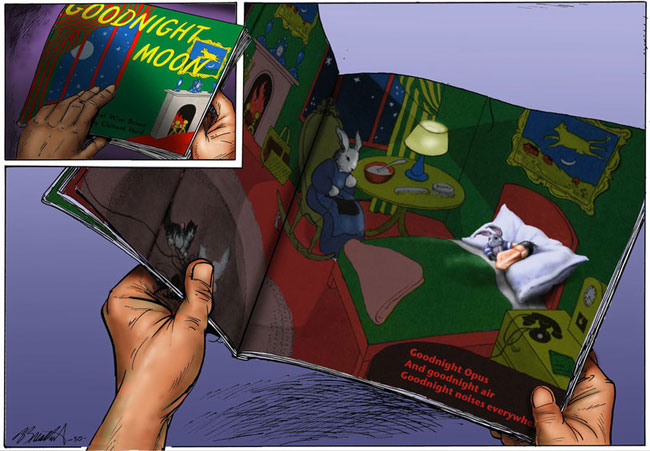 My son loves reading Goodnight Moon, my wife or I will read it to him, and as soon as it is done, he wants to read it again.Â  It’s a good story, and a classic known by almost everyone who has a child.Â  Berkeley Breathed paid homage to Margaret Wise Brown’s book on the Humane Society’s website which featured the conclusion to his Opus run.

Some who just saw the image fretted about the flightless birdâ€™s final fate, so Breathed wanted to be especially clear in his e-mail to The Times.

â€œI assure people in my web note that Opus is in the comforting place that would make me smile when I think of him in the years to come. I can only hope that his fans will smile too. If Opus was cuddling with tropical girls wearing coconuts, I suppose Iâ€™d smile too, but tinged with regret that those things just never last after that early giddy stage.â€