Or – “Soldiering On In The Face of Inevitability…” 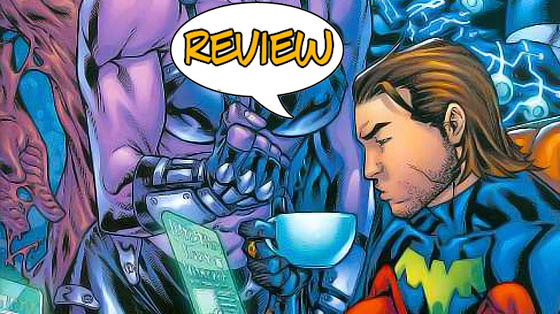 First of all, I know what you’re thinking…Â  Where’s the Hero History, schmucko?Â  Turns out that doing seven heroes at the same time is the kind of thing you should plan extra time for.Â  Go figure.Â  Add to that recent work meetings about metrics that nobody really understands and a 14 hour day yesterday, and the Hero History is late.Â  (Again.)Â  In any case, I thought I’d share a little Legion in the hopes of cushioning the blow, and then get the H.H. up and running tonight, barring the rising of the creek and the blessings of any theoretical deities.Â  Recent announcements that this book is ending with #50 have somewhat diminished the bloom on this particular Legion era’s rose, ironically at the point where things were really starting to turn around.Â  DC editorial seems to be intent on returning the old-school Legion to prominence, without realizing that’s exactly what Shooter has been doing…

Previously on Legion of Super-Heroes: Mysterious alien warlords have been attacking the United Planets, bustin’ up the place like Robot NIxon, while the LSH has been under the less-than-steady leadership of Lightning Lad, who has discovered that he doesn’t have the flair for it that the missing Cosmic Boy did.Â  Brainiac 5, Star Boy, and Light Lass single-handedly (well, actually sextuple handedly, since there’s three of ’em) defended our solar system against incursion from a strange rogue planet, and the Legion found itself back in the good graces of the U.P. thanks to intervention from a kid called M’rissey, who has the super-power of organizing things, sort of a “Personal Assistant Lad.”Â  Saturn Girl, alienated from the affections of her long-time beau due to his focus on leading the team, has turned to the affections of the roguish Ultra Boy, only to have their illicit tryst (losing her panties in the pantry, as it were) discovered by the Invisible Kid, hereby redubbed “Needs To Learn To Knock Boy.”

This issue picks up right there as Lyle “Invisible Kid” Norg flees at high speed while Saturn Girl and Ultra Boy realize what they’ve done.Â  (Rule #1 of media, kids: nobody gets any strange on the side without being interrupted in flagrante delicto.)Â  U-Boy tells her to wipe I-Kid’s mind, but Imra won’t, and decides to tell Lightning Lad the truth about their moment of weakness.Â  “No,” replies Jo.Â  “I’ll tell him.”Â  The aforementioned boyfriend is currently in the midst of a meeting with the United Planets council (albeit making somewhat of an ass of himself with the President) only to find that the council wants to praise the Legion for saving the solar system last time out.Â  Unfortunately, because that emergency delayed tryouts for the “United Planets Young Heroes,” a team designed to be, essentially, a more controllable Legion, the city of Metropolis is overrun with superpowered juvenile delinquents.Â  That’s gotta suck, huh?

Back at Legion headquarters, Princess Projectra tries to come to grips with being broke, an orphan, an exile, and no longer royalty, all at once, failing miserably at all of the above.Â  Thanks to a bit of support from teammate Phantom Girl (who can’t stand to see anyone suffer) she finds herself feeling a bit better, even asking nicely for Phantom Girl to share her old issue of Adventure Comics.Â  (?)Â  As Lightning Lad returns to headquarters, he’s quickly caught by Invisible Kid, who tells him something that we don’t hear.Â  Ultra Boy quickly tries to step in and apologize, but Garth isn’t hearing it.Â  “Don’t ever ignore a prioirty flight ring communication again, got it?”Â  Jo tries to explain again, and admit to being with Lightning Lad’s girl, but Garth punishes him by sending him out on patrol to stop the rampaging pseudo-heroes.Â  Having all the powers of a standard Kryptonian, even one at a time, this is more of a time-waster than an actual punishment.

The team returns to headquarters, and there’s a puzzling moment where Brainiac 5 denies the existence of Dream Girl’s ghost, even after being the one to believe completely in her in previous issues.Â  It passes quickly, as the Coluan genius is sidetracked by mission footage of Chameleon changing into one of the alien destroyers that have been threatening the U.P.Â  He summons Cham, asks him to duplicate the creatures weapon, and quickly CUTS OFF Chameleon’s hand.Â  (“Don’t worry.Â  He’s a shapeshifter.Â  He’ll regenerate.”Â Â  Heh…)Â  Brainy thus has a copy of the creature’s unstoppable weaponry to work with, and quickly surmises that the strange planet and the strange creatures are coming from the same place…Â  Dun dun daaaah.Â  More Ultra Boy fighty fighty ensues, M’rissey asks Lightning Lad for a note to appease his parents (“I’m not really supposed to be out this late…Â  I’m only thirteen.”) Projectra loves comic books and also participates in a conspiracy, Light Lass ends up half-naked, and Saturn Girl ends up being the one to reveal her dalliance to Lightning Lad.Â  A book with 25 main characters gets a little bit plot-pointy, don’t it?Â  In a nice show of maturity, Lightning Lad tells Ultra Boy that they can’t be infighting now, and that they’ll need to work together, regardless of thsie feeings, but finishes with “Stay the florg away from me.”

This issue feels like a more complete and satisfying story than some recent issues of this book have, but I’m left with some irritation at plot-points.Â  Projectra’s story seems to be dragging on and on, and just when I find myself liking her again, she does something stupid.Â  Having an issue that features both Ultra Boy and Phantom Girl reminds me of how well the complimented each other pre-Crisis, and how sad it is that the classic relationships have been broken in this new telling of reality.Â  Her sweetness and empathy really would do wonders for his brash and thoughtless tendencies, even here.Â  My problem with the fake 30th century florging sprock-head cursing continues in this issue as well, though mostly in the mouths of non-Legionnaire characters.Â  The art this issue was only okay, with some nice action sequences lessened by sharp-edged faces and long, spindly Aeon Flux anatomy, especially on Invisible Kid.Â  A book that started with the honey-smooth imagery of Barry Kitson feels like a completely different reality under Manapul and Livesay, making it feel like a competely different book.Â  The biggest failiing of the issue for me, though, isn’t even a failing of the issue itself, it’s the feeling of “This doesn’t even matter in a few months, anyway…”Â  The Lame Duck aspect of Legion Volume 5 has even me wondering if I shouldn’t just give up and wait for the inevitable relaunch that will come after Legion of 3 Worlds.Â  Legion of Super-Heroes #46 is a good issue overall, earning a nicely done 3 stars, I just wish I had some idea of what was happening to my Legion kids in the next few months…