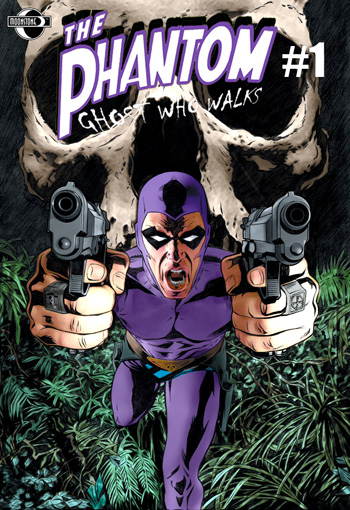 Moonstone Books has sent Major Spoilers the solicitations and cover iamges for titles arriving in February 2009.

If you like your justice served ice cold, baby, The SPIDER is it!
The body count is high as the most ruthless crime fighter of all time stars in his very own wide-vision graphic novel!Â  No one comes close to how deliciously deadly The Spider dispatches justice.Â  The criminals are not left behind for the police; they are not rehabilitated. They are no longer a burden on society, as The Spider just mows them down with extreme prejudice!
A murderous ghost of crime terrorizes New York City, dealing gruesome agonized death to any who stand in the way of his quest for power.
The city reeling, threatened with wholesale murder, The Spider finds himself wounded and caught in a desperate battle within Americaâ€™s very symbol of freedom, the Statue of Liberty. At stake, the fate of millions and the life of the woman he lovesâ€”Nita van Sloan!
Painted in gorgeous noir b/w!

Join us for stories torn from todayâ€™s headlines of modern day Africa-told in a fashion true to the earlier/darker days of the Phantom strip!

In your face, edgier stories like youâ€™ve never seen before in the pages of Phantom comics!

In this issue:Â  A UN peace-keeping mission in Northern Africa takes an explosive turn for the worst. The Phantom soon discovers this is just the opening shot in a war to end all wars waged by an army who lusts for their own martyrdom.
And for the first time EVER, the legendary Phantom artist Sy Barry has provided a new cover for an American Phantom comic!
**Each of the 3 covers are available individually.

**RETAILER INCENTIVE: for every 5 copies of the same non-limited Phantom #1 cover you order, get one free!