Or – “Is It A Bad Sign When You Fall In Love With A Comic Book Cover?” 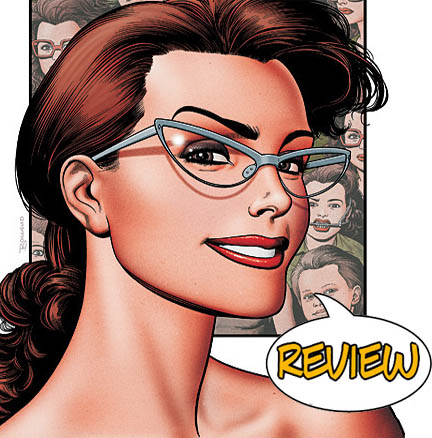 I have a secret admission.Â  I never read Fables in the individual issues, instead leaning on the TPB’s available at the local library to enjoy that series.Â  And, never really having been a huge fan of Jack, I didn’t start reading his individual title until a particularly gorgeous Brian Bolland cover caught my eye.Â  But when I ventured into the store to pick up my books recently, I wasÂ awestruck by the cover of this issue and Priscilla’s silent admonition that I needed to buy this book, if only to see the secrets that lay within…Â Â Does that make me shallow? Probably…Â  But, in the spirit ofÂ “Can IÂ Just Jump IntoÂ A Title Week,” (now in it’s second month!) I decided toÂ take a shot in the dark.Â Â

Previously, on Jack of Fables:Â  All the stories are true.Â  Every fairy tale, every kids morality play,Â all

theÂ doggerel and legend and lore.Â  And the characters in these stories all live among us, immortal, powered by belief, and pass unseen in our mundane culture.Â  Well, mostly unseen…Â  Take, f’rinstance, one Jack of the Tales.Â  Jack Horner.Â  Jack Spratt.Â  Jack the Giant Killer.Â  Being a rogue and ne’er do well of long-standing, Jack has a few problems with passing unseen ANYWHERE, and has in fact made himself quite obvious among the ‘Mundies.’Â  After successfully becoming rich in Hollywood (only to find himself outmaneuvered and penniless) Jack has been exiled from Fabletown, and unwillingly involved in an ongoing series of clashes with a man known as Mr. Revise, who essentially wants to edit and sanitize him out of existence.Â  (I wonder if that’s some sort of meta statement about censorship?Â  Hmmm…)Â  Still searching for hidden treasure and the big score, Jack of the Tales wanders through the world on a smile and a promise, leaving broken hearts and empty purses in his wake…

Course, this ain’t his story.

This issue starts with one of the characters (Eliza Wall,Â auntÂ of supporting characters the Page sisters)Â making an on-panel apology for promises made at the end of last issue, when the eponymous Jack promised laser battles, monster trucks, and bikini girls wrestling wild animals, and explains that we will instead be seeing the story of Priscilla Page, one of Revise’s beautiful librarians, who help him to run his “retirement home” for Politically Incorrect Fables.Â  “And while Pris is a girl, and has been known to wear a bikini on occasion, I don’t believe she’s ever wrestled a cheetah.Â  Not that she wouldn’t try…”Â  Heh.Â  I love the dialogue on this already.Â  Priscilla grew up in the shadow of her sister Robin, awkward and alienated, repeatedly told to “be herself,” only to find that nobody really cared for herself.Â  And, in the style of awkward, alienated teens everywhere, she chose what seemed like the only meaningful course of action: be somebody more popular than herself.Â  She grew into a seemingly confident and driven woman, one that nobody could ignore or shun, but found that she everybody loved her…Â  except for she, herself.Â  She tries to help her father in preparing Golden Boughs Retirement home from the oncoming attack from the monster called The Bookburner.

Her father screams in her face, sending her away with a cruel rejoinder (“Try not to ruin anything else on your way”) while we check in with our title character.Â  Jack and his associates Raven and Gary the Pathetic Fallacy are traveling cross-country with Priscilla’s aforementioned perfect big sister, ready to face down the Bookburner themselves.Â  Hillary tries to talk strategy with Jack, but his plan is simple.Â  “We’ll truss up Bookburner lickety-split, and then you and me and maybe your sisters all hit the hot tub together.Â  So, uh…Â  just how close are you and your sisters, anyway?”Â  Ha!Â  A hysterical moment with Babe the Blue Ox follows (“Crash Ganesvoort could tell you stories about his years as a Special Ops Mime in the French Foreign Legion…”) and we see that the third Page sister, Hillary, has been captured by the Bookburner and is being threatened with torture if she doesn’t spill the beans on how to find Golden Boughs, and his old adversary, Revise.Â  Meanwhile, Priscilla vents her rage by smashing a couple hundred dollars worth of crockery, but is visited by a friend named Kevin, who explains that Revise isÂ nearly as crazy as the Bookburner, and that her sister Hillary is Revise’s daughter.Â  “Oh, right.Â  So who’s my father, then?Â  Bookburner?” she asks sarcastically…Â  “Um, actually?Â  Yeah.”Â  The plot thickens, while elsewhere, Jack and friends get closer to home, ready to fight off Bookburner, as Robin advises him to let HER do the talking with Mr. Revise.Â  “Of course, when we get married, you may want to come live with me at the Golden Boughs…”Â  Before he can deal with that revelation (Hint: I’m pretty sure his answer will rhyme with “Bell Jo”) their van is overturned and sent down an embankment into the snow.Â  Jack and friends exit, only to see a familiar ovoid shape, their old traveling companion, Humpty Dumpty.Â  “They put me back together again…Â  But they turned me into a deviled egg this time.Â  AND I LIKE IT!!” screams Humpty through a mouthful of jagged fangs, as we fade to black…

I have to say I really love this book.Â  The narration (this issue provided by Aunt Eliza) is hysterically self-referential, and the coming attractions caption was laugh out loud entertaining (“I don’t know who this new narrator broad is, but she’s turning my book into some kind of post-modern chick-lit…”) and the main character is a very appealing roguish figure.Â  Much like Fables, it’s mother title, Jack’s book is filled with unexpected twists, and flies in the face of conventional comic book story logic.Â  The verbiage is by Bill Willingham and Matthew Sturges, and the entire issue is wonderfully dialogued, with even the most minor character having a unique and interesting voice.Â  The art, by Russ Braun and Jose Marzan, lives up to the cover image, and even makes the image of a walking egg menacing, no easy feat.Â  I’m happy to say that I was able to quickly immerse myself in Jack’s world, and the strengths of the book more than carried any weaknesses, leaving Jack of Fables #26 with a very well-done (or should that be “over-easy”) 4 out of 5 stars…Â  I’m strongly considering adding this one to my pull list, and wondering why I haven’t done it sooner.