By Stephen Schleicher on October 9, 2008 6 Comments 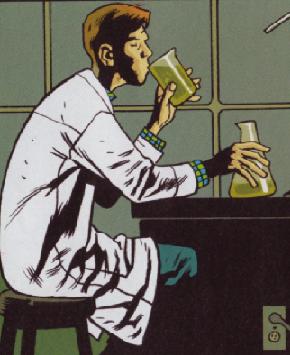 If you aren’t from a distant planet, aren’t getting your powers from a special device, and aren’t gifted with cunning and skill beyond those of the everyday man on the street, your chances of becoming a super-hero are pretty slim.  These limitations have vexed the normals of the DC Universe, prompting scientists – mad and sane alike – to develop drugs to give them powers to fight (or commit) crime.

Take the jump to discover the Top 10 Drugs, available for a price, in the DC Universe. 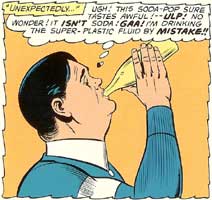 If you’re a fat kid, and you want to join the hippest group of teenagers in the galaxy, why not take a swig from one of those bottles under the kitchen sink and see what happens?  That’s how Chuck Taine was granted super bouncing powers after he “accidentally” drank a bottle of Super-Plastic Liquid.  Is it any wonder people don’t pay attention to Mr. Yuck anymore?

What better way to increase your strength than with the formula, the Z-Formula.  Created by villain Mr. Who in the 1930s and 40s, the elixir gives the user the strength of ten gorillas.  Side effects usually include bingeing on bananas, and fits of poo flinging. 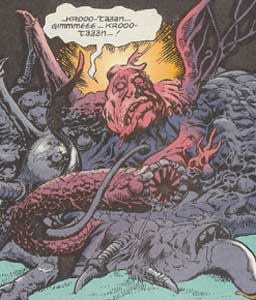 If you are tired of your boring everyday life, why not experience it as someone, or something else?  A dose of Thanagarrian Krotan will give humans the ability to change their shape one time, but if you are from the planet Thanagar, you can shape shift to your heart’s content.  For Earth-folk, the phrase “choose wisely” is very apropos. 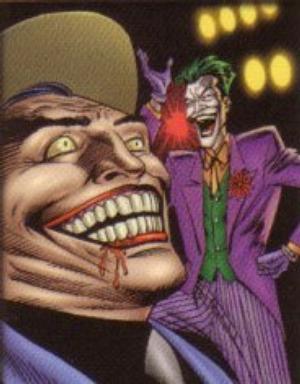 If you really want a laugh, then make your way to the nearest dark alley and look for the man with a big grin on his face. He’s a bit pasty, but don’t let that deter you, ask for a big helping of Joker Venom. It’s sure to bring a permanent smile to your face for the rest of your life. (note: rest of your life is estimated to be minutes instead of years).

This is a one shot drug that does nothing for the user, but everything for the administrator – until Batman shows up and puts an end to the fun.

If you ever wished for super speed, but the thought of dousing yourself in chemicals and standing in an open field during an electrical storm doesn’t do anything for you, then the highly addictive Velocity 9 might be the solution.  Developed by Vandal Savage, the side effects of using this injectable drug include dehydration, severe exhaustion, and rapid aging (standing in that open field isn’t sounding like that bad of an idea now is it?)

Bart Allen’s nemesis, Inertia obtained his powers by using a variant of Velocity 9 developed by Deathstroke, and Earth-3’s Johnny Quick injects himself with a variant called Speed Juice.

As far as hallucinogenics go, nothing is more crippling than Jonathan Crane’s Fear Gas.  When used, the victim experiences their greatest fears, much to the joy of Crane’s alter ego; the Scarecrow.  While an immunity to the drug may build after repeated use, most users don’t make it past the first or second dose.  While Fear Gas is an inhalant, Crane has developed an injectable form of the drug for more intense phobia inducing fun.  Women who want something tailored just for them, might want to check out Femfear (does not work on Catwoman). 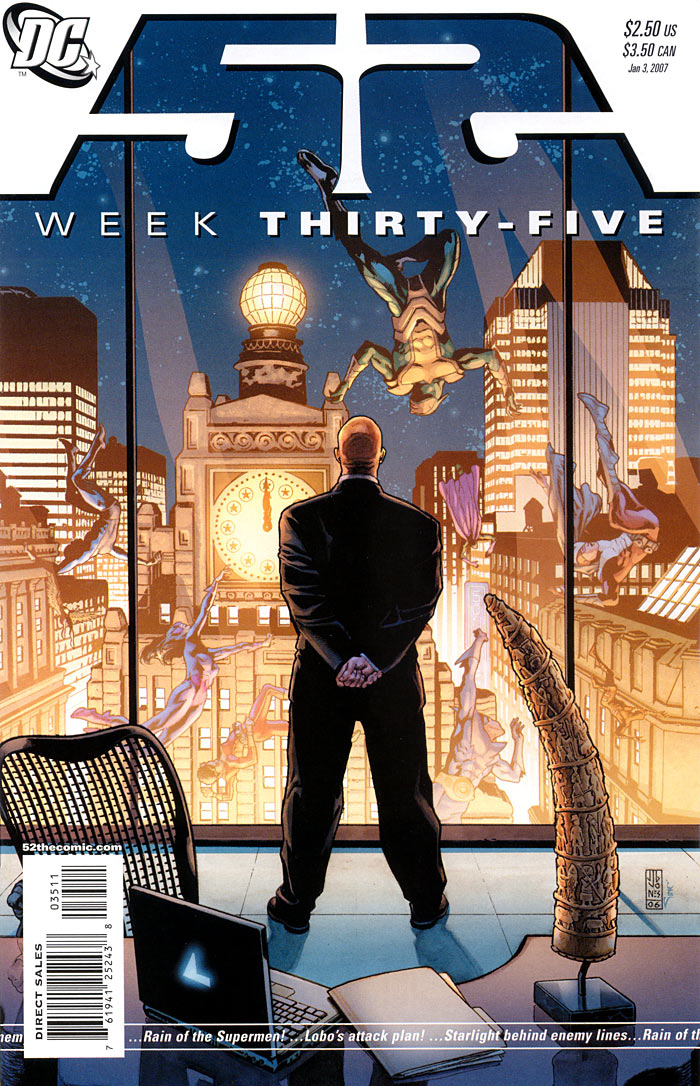 If mad science is your cup of tea, and that guy in the blue and red tights is always ruining your plans to take over the planet, why not turn the tables and give powers to anyone who can pay the price by using gene therapy?  That’s exactly what Lex Luthor did in the pages of 52, creating a new group of heroes and villains that he could control as part of his Everyman Project.

Each person who went through the highly criticized project came out with a different power, tailored to the subject’s desires.  Unfortunately, Luthorcorp didn’t have all the bugs worked out of the system, causing some to die from massive organ failure months after receiving the treatment. 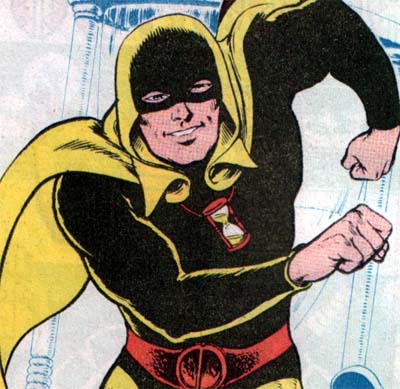 Working as a researcher at Bannerman Pharmaceuticals, scientist Rex Tyler worked to develop better vitamins and hormone supplements.  He eventually discovered the miraculous vitamin – Miraclo.  When testing moved to human subjects, Tyler discovered a single dose gave him superhuman strength and speed.  Tyler kept the discovery of Miraclo a secret and used his supply of drugs to fight crime in Appleton City.

Unfortunately, Miraclo’s effects only lasted an hour, and could only be used once per day,  prompting Tyler to adopt the name Hourman.  Later it was discovered Miraclo was highly addictive, prompting Tyler to eventually stop using his miraculous little pill.  Tyler’s son Rick later adapted the formula into one that is non-addictive.

Better than ‘roids, Venom is an amped up version of Miraclo.  This potentially addictive drug has been used by hero and villain alike to give Superman-like strength to the user.  Batman became addicted to the original formula, before kicking the habit in Legends of the Dark Knight #16-20.  Later, Bane (real name unknown) would use the formula to pump himself up to ridiculous proportions, which lead to Batman getting his back broken during the Knightfall story arc (irony, your name is Venom).  In Batman Beyond, a toned down version of Venom is sold on the streets under the name Slappers, and is a popular drug used by those playing competitive sports. 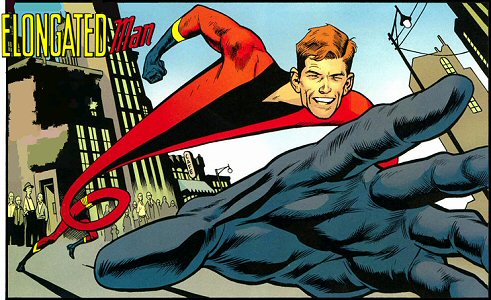 An extract of the Gingo plant, Gingold is the primary flavor used in Gingold Soda.  But beware!  Most people are highly allergic to large concentrations of Gingold.  Those who drink enough of it, or who can create a a powerful extract from the fruit, (and live) will discover the ability to stretch body parts to extra ordinary lengths and sizes.

The only heroes to have fully realized the potential behind Gingold are the Hero Hotline’s Stretch, and the recently deceased Ralph Dibny (aka The Elongated Man).  Even with all the allergy warnings about Gingold, that hasn’t stopped the drug from becoming the number one supplement for “natural male enhancement”. 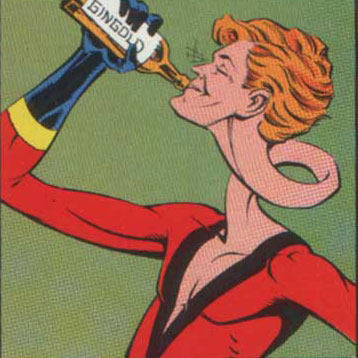 Remember Kids: Drugs are bad, and you shouldn’t use them. Except for the really good drugs.  Ask your parents, they’ll fill you in on which ones to avoid.