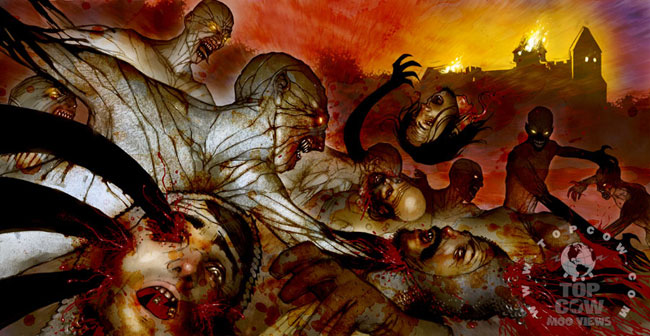 Top Cow has announced Impaler will get an ongoing series from the company.Â  The vampire thriller by William Harms with art by Matt Timson has had success with the first trade paperback, thus more vamp stories are on the way.

â€œVampires continue to resonate with people â€“ just look at the success of properties like HBOâ€™s True Blood and Stephenie Meyerâ€™s Twilight books,â€ said Top Cowâ€™s VP Marketing and Sales Mel Caylo in a prepared statement. â€œWe recognized Impaler is truly a fresh, new spin on the â€˜vampire mythosâ€™ and were excited to keep the story going. We think it has the potential to be like Walking Dead, but for vampires.â€

In the first story arc of Impaler, a derelict cargo ship is found adrift offshore during a terrible blizzard in New York City. When New Yorkâ€™s Finest is sent to investigate the missing crew, an unspeakable horror is unleashed that quickly spreads all over the snow-covered borough, as a vampire plague quickly moves through the cityâ€™s population. The peopleâ€™s only hope lies in Vlad Tepes, the real-life historical inspiration for the vampire legend, Dracula. Vlad the Impaler arrives to defend the city from the ever-growing vampire horde, but how much can one man do against an army of thousands?

The first issue picks up where the first arc left off and arrives in December.