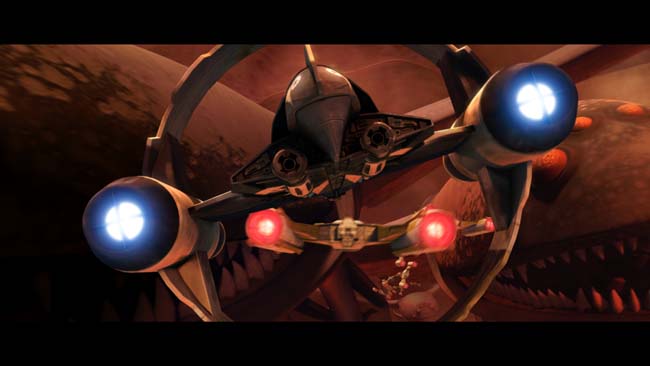 STAR WARS: THE CLONE WARS puts a new shine on a very recognizable part of Star Wars lore as the Y-wing bombers make their debut in â€œShadow of Malevolence,â€ an all-new episode of the hit animated series premiering at 9 p.m. Friday, Oct. 10, on Cartoon Network.

The Y-wing bombers were first seen among the Rebel Allianceâ€™s primary starfighters in 1977â€™s Star Wars: Episode IV A New Hope. â€œShadow of Malevolenceâ€ director Brian Kalin Oâ€™Connell, writer Steve Melching and supervising director Dave Filoni were inspired by the concept of showing the Y-wings â€œfresh off the showroom floor.â€

â€œWe like to find ways to draw connections between The Clone Wars and the original trilogy,â€ Melching says. â€œIn the original Star Wars, the X-wings and the Y-wings have truly been through the wars, and theyâ€™ve had the crap beaten out of them. We thought it would be fun to imagine that they were originally manufactured during the Clone Wars â€“ so for us, they came off the assembly line and into battle.â€

Oâ€™Connell says the artists behind The Clone Wars were excited about â€œintroducingâ€ the Y-wings â€“ and putting the seriesâ€™ lead characters into a full-fledged space battle for the first time.

â€œGuys like (design/concept artists) Russell Chong and Killian Plunkett, along with Dave (Filoni) come from a classic Star Wars background, so they understand that Ralph McQuarrie feel of the 1970s, and they do it right,â€ Oâ€™Connell says. â€œWe donâ€™t want to change the lore, we want to add to it. By introducing the Y-wings, we get to add a new dimension, a little history.â€ Some people, he realizes, might think that itâ€™s â€œjust a vehicle.â€ Nevertheless, Oâ€™Connell says, â€œWe know itâ€™s a huge deal for the fans. We donâ€™t let it distract from the story, but we still get to add the geek shot â€“ and when we do, we try to do it justice.â€

STAR WARS: THE CLONE WARS airs at 9 p.m. Fridays on Cartoon Network. George Lucas is the seriesâ€™ creator and serves as executive producer, and Catherine Winder is producer.