On the Next Major Spoilers Podcast: JSA: The Golden Age

By Stephen Schleicher on September 12, 2008 6 Comments 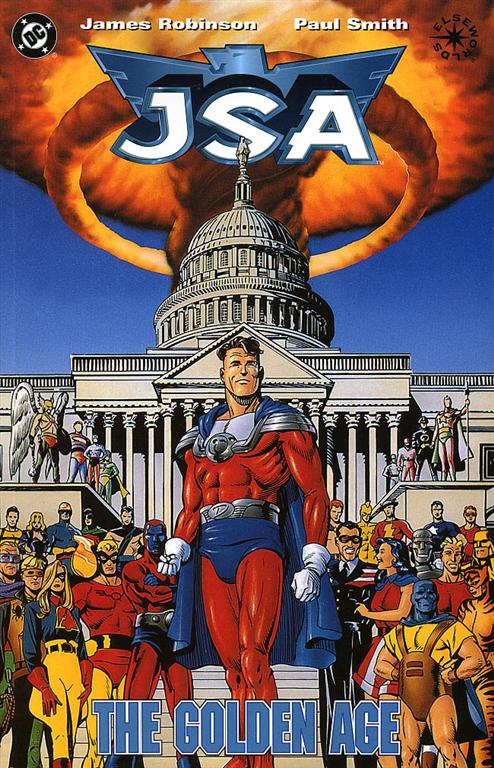 Next week on the Major Spoilers Podcast, the crew take a look at DC’s JSA: The Golden Age by James Robinson – yes the same fellow behind Starman.

Clearly influenced by Alan Moore’s Watchmen, this reissue depicts DC’s superheroes from the 1940s hanging up their capes following the end of WWII. Whereas Moore’s superheroes were forced into retirement, here the heroes succumb to disillusionment, personality flaws and even madness. Robinson unpersuasively projects the dark pessimism of 1990s superhero comics onto the idealistic, committed heroes of half a century before. One of these “mystery men,” Tex Thompson, alias the Americommando, enters politics and initiates a government project that uses atomic power to create Dynaman, a “superman” who becomes a living weapon against the Soviets. Beneath their patriotic rhetoric, Thompson and Dynaman conspire to become dictators. But Robinson never explains why the “greatest generation” that just defeated fascism abroad would embrace a homegrown version. By revealing that Thompson’s and Dynaman’s identities have been usurped by impostors, Robinson shies away from demonstrating how an American superhero could morph into a neo-Nazi Ã¼bermensch. Smith’s realistic artwork and mastery of gesture and facial expression bring out all the dramatic potential in Robinson’s scenario. But Darwyn Cooke’s recent The New Frontier paints a more convincing postwar portrait of DC’s superheroes. (June)

We want to know what you think of the four-issue mini-series from 1993.Â  Post your comments below and they may be included in the show.Â  My guess is there are many Major Spoilers readers who have never heard of this Elseworld’s title.Â  For those of you who are in the dark, what topic areas do you want us to talk about in this detailed discussion?