By Stephen Schleicher on September 1, 2008 6 Comments

Tonight on the Major Spoilers Podcast (recorded on Tuesday, available on Wednesday), we’ll be drawing for the winner of the Major Spoilers Dark Knight Strikes Back statue, inspired by Frank Miller’s work on DK2.Â  Take the jump to see all the entrants.

Julian certainly should receive an award for hardcore dedication.Â  This Major Spoilerite hob nobbed with the well-to-do of the comics world and entered seven times!

Hereâ€™s Julian with Dan Piraro. Dan is a painter, illustrator, and cartoonist best-known for his award-winning syndicated panel cartoon Bizarro. 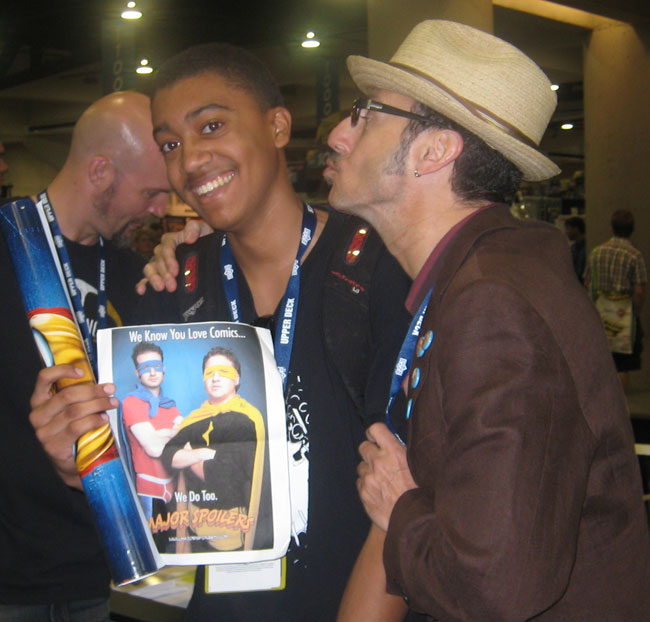 Here he is mugging with Jerry Holkins and illustrated by Mike Krahulik, the creators of Penny Arcade. 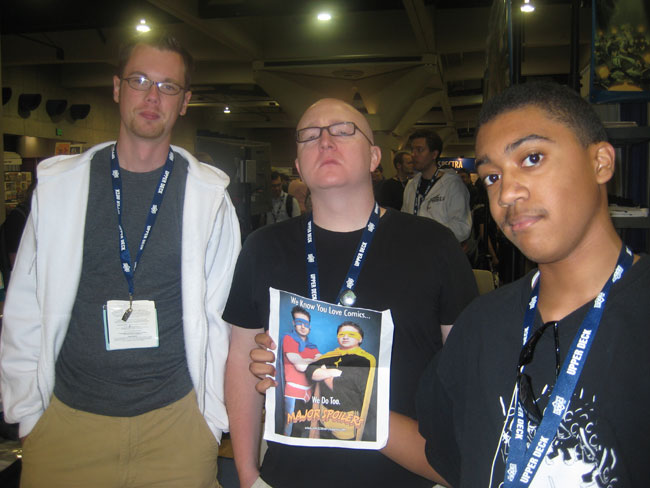 Julian even got Peter Mayhew (Chewbacca) to pose for a pic. 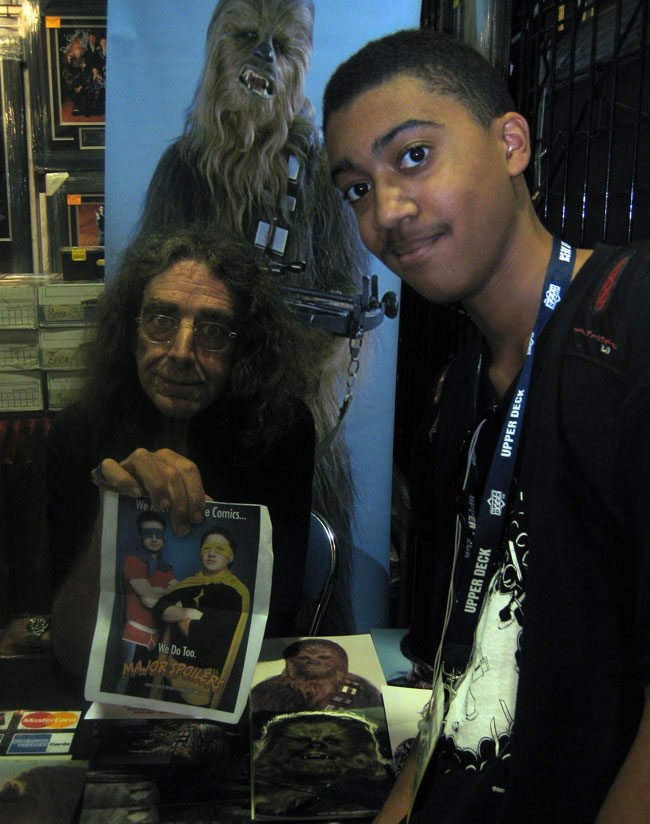 One of the things I really wanted to do with this contest is get some free publicity for comic shops around the country.Â  Julian got the manager Ryan Liebowitz to pose for him. 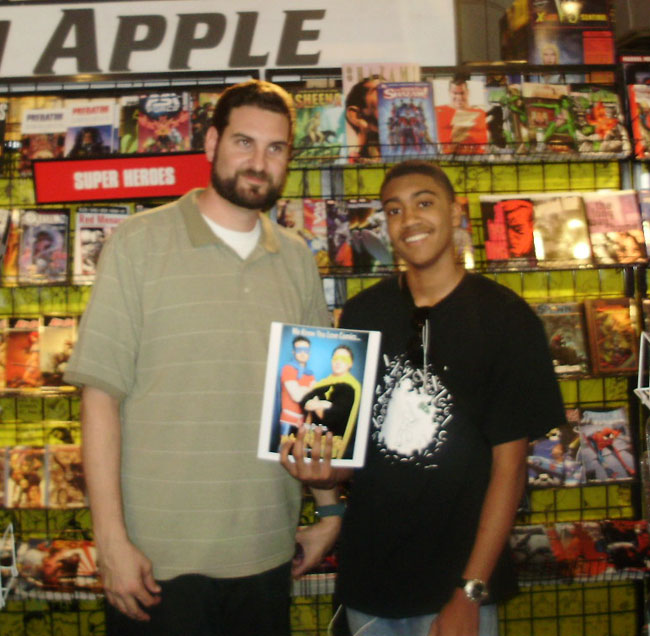 Also while at Golden Apple, Julian got his picture snapped with Mark Millar… 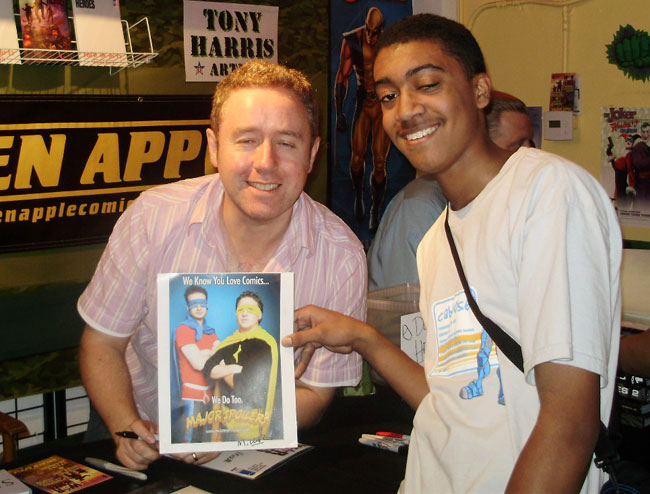 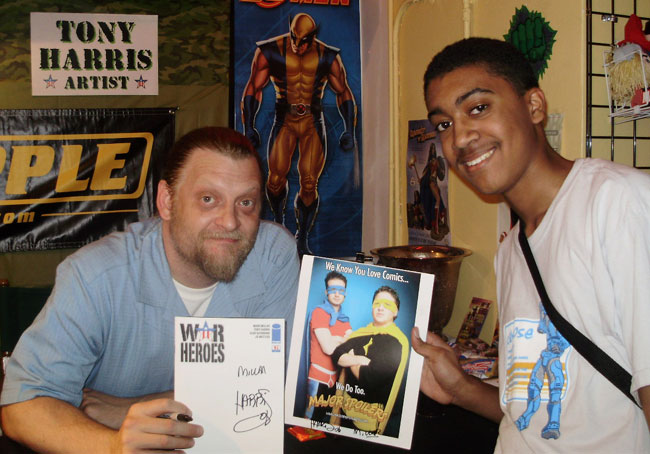 He even got them to sign the Major Spoilers Poster!

And finally, hereâ€™s Julian with Triumph the Insult Dog, who told Julian, â€œIâ€™ve got a Major Spoilers for you: You Will Die Alone!Â  I kid, I kid.â€ 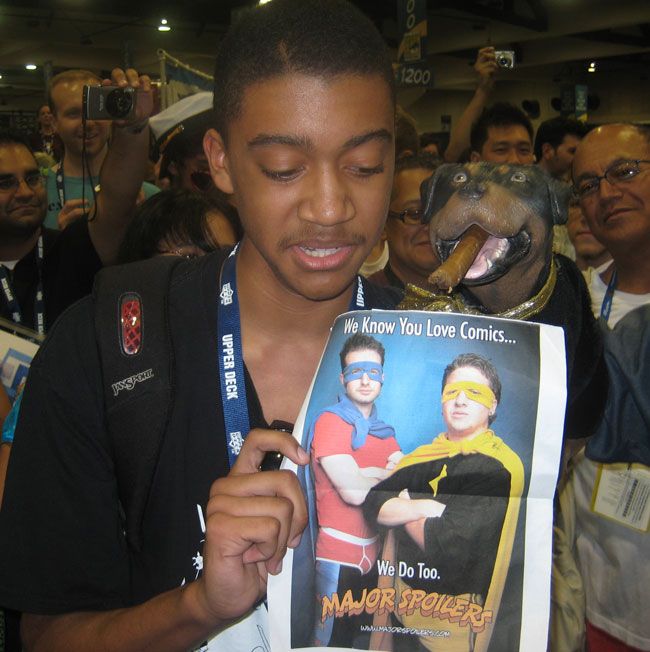 Hermit is one of those guys that was always promising he would enter, and he finally did, posing with the owner of Librairie Millenium – yes, Hermit is in Canada, but we aren’t going to hold that against him. 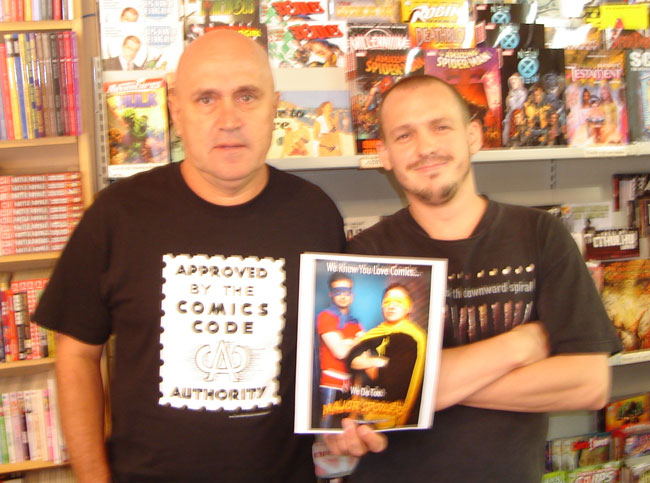 Another Eric, this one from Cardboard Monocle took the time to Area Comics & Gaming in Panama City, FL to get his entry in. 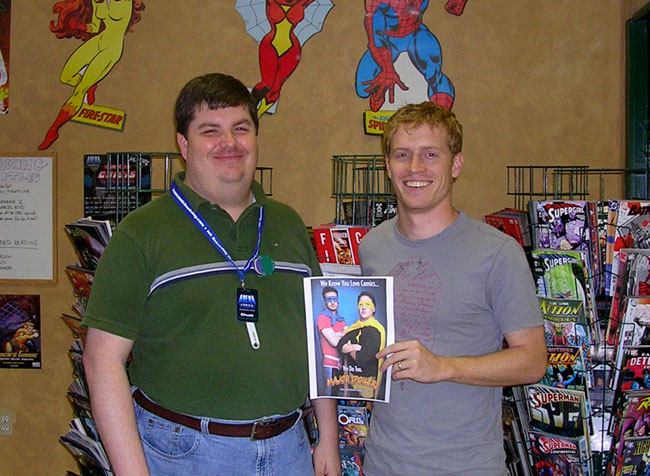 I finally managed to get out and participate in this contest! There are no celebs or conventions around here, and trolling the beaches for women probably wouldn’t sit too well with my wife, so I decided to hit some of the local comic shops! I started with my personal favorite, Arena Comics & Gaming! I then decided to hit some other shops around town! I assure you that none of these photos have been manipulated in any way.

Oh, really?Â  I find these other images somewhat questionable.Â  I know I’ve been traveling here and there, but don’t remember hanging out in Florida in the last couple of weeks.Â  Eric ended up with only one legit entry into the contest…

Even though comics have a smaller female audience, I’m glad Arabella decided to enter the contest, standing in front of Comickaze Comics in San Diego, CA. 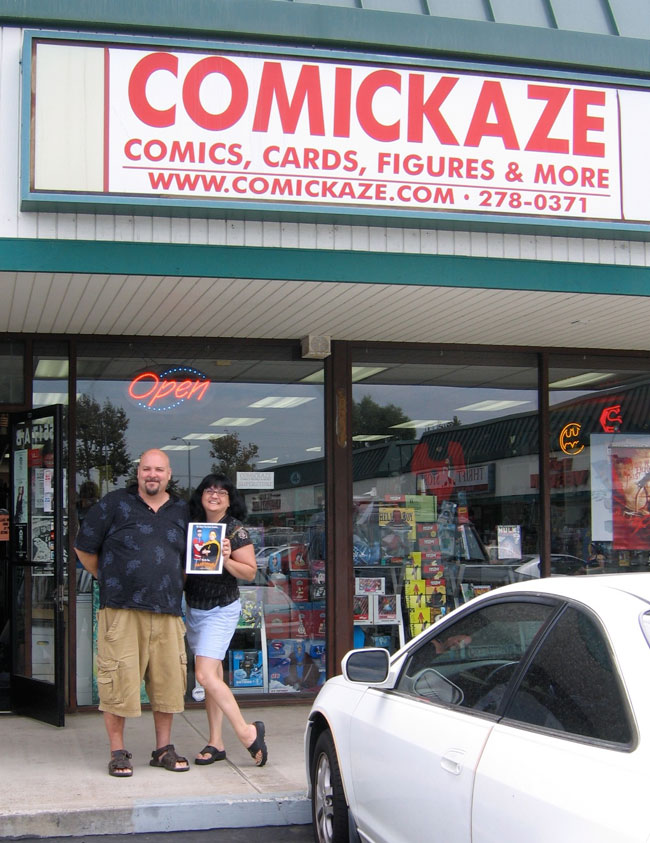 On the plus side, the Major Spoilers Annual Halloween Costume Contest is just around the corner, and we have plenty of other things to give away in the near future.

Don’t forget to listen to the next Major Spoilers Podcast to discover who wins and who goes home empty handed.