Image Comics has provided Major Spoilers with the cover images and solicitation information for titles arriving in November 2008.

The wait is over!Â  The highly anticipated and much debated return of JASON PEARSONâ€™s signature creation is here!

Mack takes a job that should be easy money, but leave it to his daughter Panda to screw it all to hell.Â  Trapped on top of a skyscraper, surrounded by dozens of well-armed men aiming for the killâ€¦and our â€˜heroesâ€™ down to one last bullet.Â  The most exciting BODY BAGS story ever will definitely end with a bang! 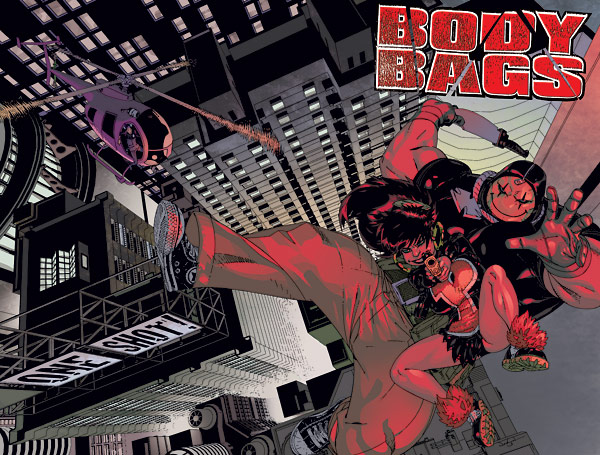 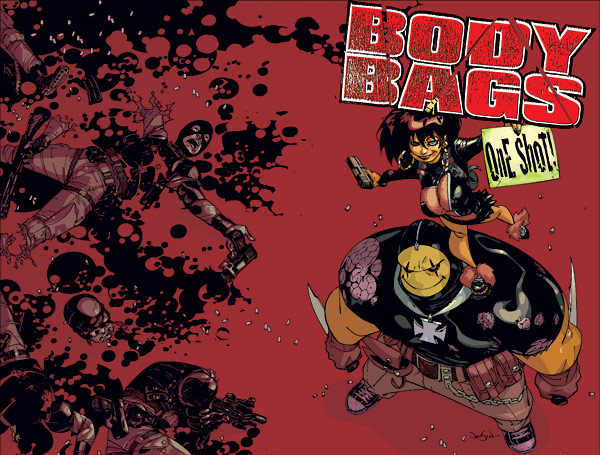 Last issue, everything changed! The world of SPAWN was rocked by the most stunning moment in the series’ sixteen year history. And now, the mystery deepens… Sides are chosen and secrets are revealedâ€¦ Experience SPAWNâ€™s bold new direction with the all-star creative team of TODD McFARLANE, WHILCE PORTACIO and BRIAN HOLGUIN.

Douglas Fredericks is a kid on a mission. His parentsâ€™ 15th wedding anniversary is justÂ  around the corner and he wants to create an extra-special present for them. However, his wild attempts at unique gifts are all shut down by his friends and neighbors, concerned that Douglasâ€™s wild ideas go against what THEY say. But who are THEY? Why do THEY make the rules? And why does everyone listen to THEY?

Out of the ashes of misfortune will rise the next generation of great adventurers! After their parents are lost on an archeological expedition, four children begin to unlock the secrets of their parents’ mysterious lives, discovering a hidden world of mystical artifacts, mythical creatures, and arcane knowledge. Soon they find themselves drawn into a conflict over a great library that has kept two kingdoms at war for centuries, the children must save an enchanted forest, the birthplace of magic itself. Join us as these children become the latest members of the fabled New Brighton Archeological Society, and take their first steps towards their true destiny!

The creative team behind INVINCIBLE PRESENTS: ATOM EVE return to their original creation, a modern-day member of an ancient cult whose duties dictate that he roam the earth to protect the living from the dead…and occasionally to protect the dead from the living.Â Itâ€™s the follow-up to the book WIZARD MAGAZINE called one of the top 200 comics released during its publication history.

Romeo and Kelsie just want to go home, but life has other plans.Â  Strange things happen all around in a story about that music that follows you wherever you go.Â  When it comes to rock â€˜nâ€™ roll, you donâ€™t have to understand what theyâ€™re saying to know what theyâ€™re talking about.

In the second volume of THE AMAZING JOY BUZZARDS’ graphic novel series, band manager Dalton finds himself on his way to a mental breakdown. He’s hot on the trail of a criminal organization known as the Spider Syndicate. This naturally leads to monsters riding vespas, the Buzzards rocking out at a mysterious Egyptian temple, werewolf tribes, and more! Amidst the mayhem, Gabe and Betty continue to get closer (isn’t that sweet?), and Biff happens upon nothing less than the secrets of the whole universe and life as we may or may not know it!

This oversized (8.5×12â€) hard cover edition collects four classic FRAZETTA-based tales. Enter the savage world in â€œDark Kingdomâ€ as Red Morgan conquers demons to avenge his family. Americaâ€™s icon Teddy Roosevelt battles Mayan gods and Martians in â€œCreaturesâ€ to protect his country and the world. Enter â€œSwamp Demonâ€ as the battle against good and evil wages on in the land of Iparsia, and two horror classics come toe to toe in â€œDracula Meets the Wolfman!â€ All brought to life by some of the industries’ top creators, along with new, never-before printed bonus material.

Finally!Â  The stupendous and gripping climax of the Triadâ€™s rampage on Earth!Â  The Eisner-nominated GÃ˜DLAND saga reaches a fever pitch in this fourth trade paperback collection, regaling you with the continuing exploits of Earthâ€™s emissary to the cosmos: Commander Adam Archer.Â  The cold hand of death touches friends and foes alike, with the fate of the Earth at stake!Â  You canâ€™t miss this one!Â  (and, yeah, Basilâ€™s still sporting a womanâ€™s body!)

â€œI can’t recommend this book more highly to anyone out there with a brain, a sense of humor, and a taste for classic comic absurdity.â€ â€“ Newsarama.com 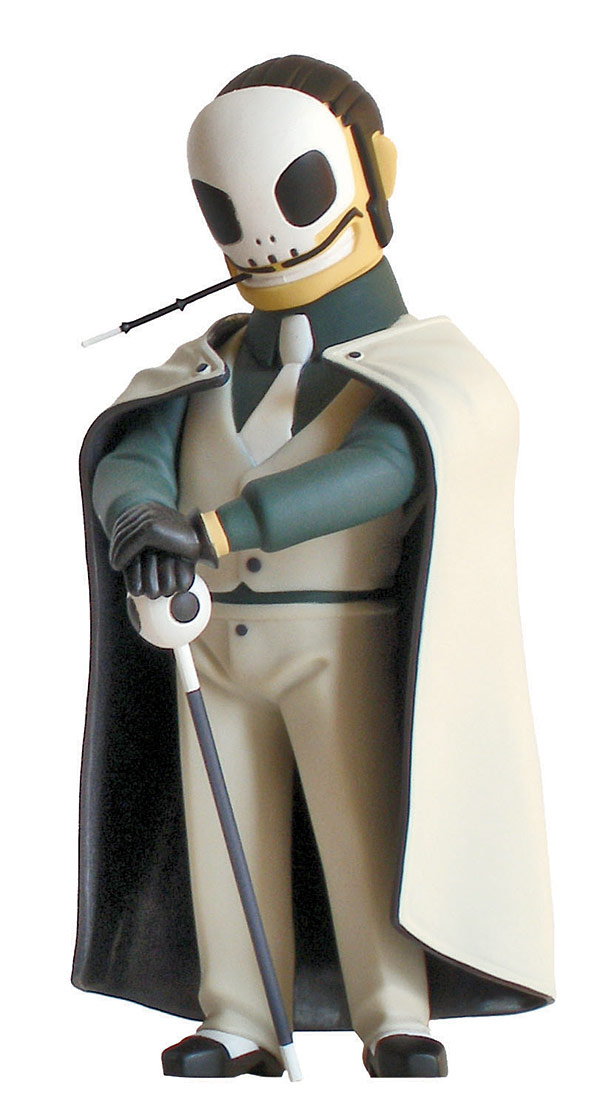 Collecting this first incredible story arc from the highly-acclaimed new series, plus the much sought after annual! Includes all covers and pin-ups as well as a few small surprises!

THE WALKING DEAD OMNIBUS, VOL. 2 HC
story ROBERT KIRKMAN
art & cover CHARLIE ADLARD & CLIFF RATHBURN
This deluxe hardcover features the next 24 issues of the hit series along with the covers for the issues all in one massive, oversized slip-cased volume. Perfect for long time fans, new readers and anyone needing a heavy object with which to fend off the walking dead.Â  Strictly limited to a print run of 3000.

Churchill is hunting, Mr. Caproni is taking one for the team.Â  Maggie is losing it, as Bob finally tells us what drove him to turn his back on his brother and all his friends.Â  Once you read this issue, say goodbye to all the innocence you’ve had in you.Â  Nothing… and we mean nothing will ever be the same.

ARE YOU READY TO RUUUUUMMMBLE?!
The main event is finally here â€“ and Chuck Amok finds himself in one corner!Â  In the opposite corner: the badazz mofo known only as THUNK!Â  Two psycho-mages enter (well, one mage in this case)â€¦ but only one will leave!Â  The wackiness has all led to this â€“ so donâ€™t miss it!

BALL TO THE WALL! WATCH THE PATSY FINALLY GET HIS ON!

Vigilâ€™s true identity is revealed as the original Dynamo 5 team returns in the action-packed finale to the seriesâ€™ third story arc.

Enrico goes against the wishes of both his mother and brother and signs on to work for Boccioniâ€¦as bait on a dragon hunt. But when all hell breaks lose, the resourceful boy not only cheats fate, but earns a very special reward.

Death seems to loom everywhere as Barbaraâ€™s fantasy life takes a dark turn and she does everything she can to figure out why Coveleski has lost its powers. Meanwhile, the truth behind the ghoul upstairs is finally revealed, and it may all be too much for Barbara to bear.

Professor Furia, that vile, stinky, disgusting excuse for a human has forced us to publish a 10-page Furia story. Prepare to have your eyeballs violated! We also discover Poquito Furiosioâ€™s younger days as a dancing disco king. And the Luchadores Five find themselves in the midst of a battle between the Surf Crew and Surf Creatures!

SERIES FINALE!
Race and Liz return as the long-running superhero saga comes to a close. Weâ€™ve saved the best surprises for last!

With a special wraparound cover featuring the entire series cast, past and present.

Mi-Chen-Po has been manipulating Proof for 150 years. Who is he and what does he want? Plus, the origin of the golem is finally revealed and he’s not what you think he is!

Fall From Grace. Following the shocking events from the previous few issues, the Dragon’s reputation goes straight into the crapper and the world unites against him!

His name is Knossos.Â  With the power to manipulate earth, he is one of the most powerful beings alive.Â  And he has only one weakness:Â  The Sword.Â  His first mistake was helping to create it.Â  Killing the mother of Dara Brighton, the Swordâ€™s current wielder, may be his last.

They continue down the road â€“ and they are not alone.