There are many subtle differences between the comic publishing industry in 1958, when the Legion debuted, and 1991-ish, when the ‘Legionnaires’ comic was published.Â  Aside from the obvious post-modern, technological blah dee blah, the major factor that separated the 90’s from the 50’s in comics terms was the existence of the X-Men.Â  The 600 pound gorilla of the comics world, our boys and girls in blue and gold caused rampant changes to nearly every comic book title extant, in the hopes of catching some of that proverbial ‘phat cash.’Â Â Today’s H.H. subjectÂ is one of the characters who really shows that influence, for good or for ill,Â as the 30th century’s take on Wolverine, himself influenced by Legionnaire Timber Wolf. (Of course, Logan then influenced Wolfsbane and other feral hero types, who in turn influenced this character.Â  Can anybody say “Ouroboros?”Â  No?Â  Me, neither…)Â Â Regardless of her roots, though, she’s more than just a T-Wolf stand-in, acting as a change of pace in character terms, much as her teammate Dragonmage did in terms of powers.Â  Driven by her instincts, motivated by her whims, she represents something unusual for the Legion: the animal perspective.Â  This, then, is your Major Spoilers Hero History of April Dumaka of Earth…Â  Catspaw! 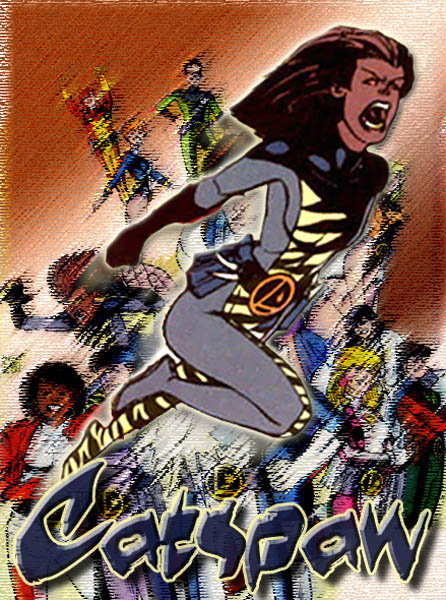 The story of Catspaw starts at the precise place we started our last Hero History (and, not coincidentally, the place where we’ll also start the *next* one) in the waning moment of the Dominators control of Earthgov.Â  As the Legion (actually Legions) fight their way into Metropolis, they end up freeing prisoners from the experimental stockades under Weisinger Plaza, byproducts of the Dominators attempts to understand the metahuman physique… 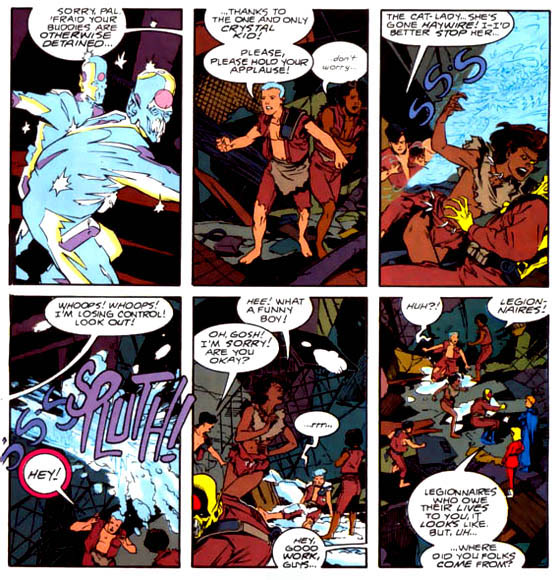 The “cat-lady,” as her erstwhile compatriots would have it, is one of the unlucky ones from the experimentation chambers, as with her powers of agility and speed comes the general demeanor of a feline, including ficklness and a love of all things shiny. 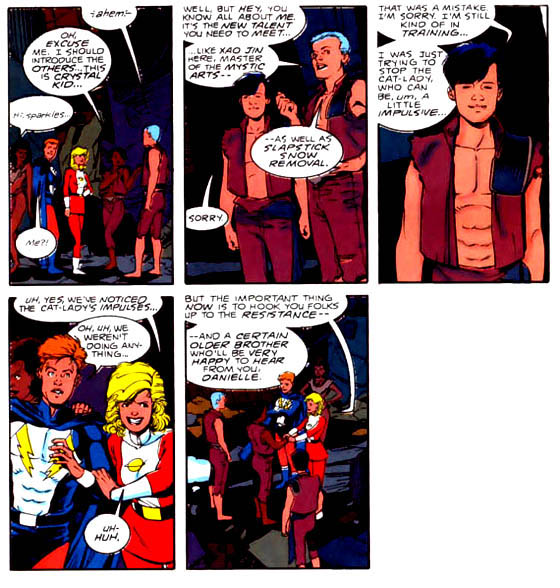 The Legionnaires and the Weisinger refugees team up and finally run the Dominator presence away from Earth.Â  The kids of the Legion (initially believed to be clones, though later revealed to be much more than that) believe that it is the loss of the Legion and it’s traditions that led Earth down the primrose path to disaster, and vow to not let it happen again.Â  They set about rebuilding, but Catspaw doesn’t really *do* home improvements, preferring to play with the cute boys in tights… 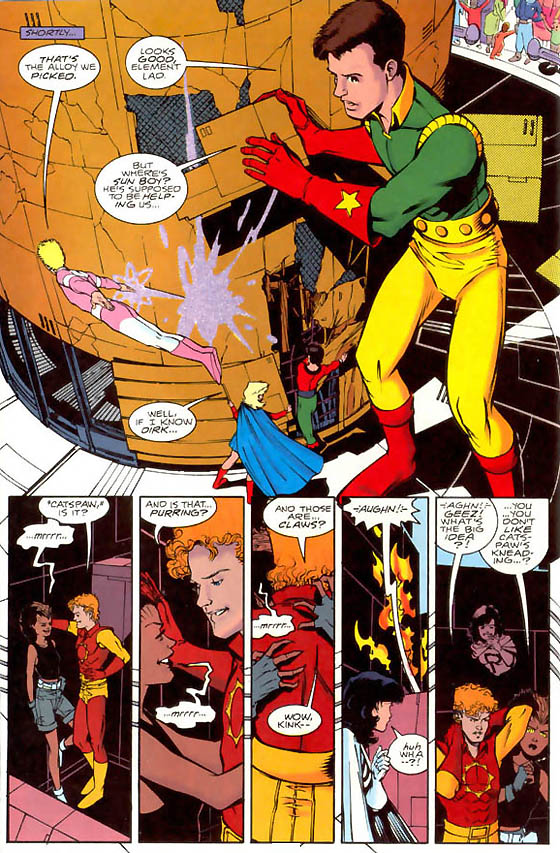 It’s really the gout of flame that makes this scene hysterical to me, along with Catspaw’s complete confusion at Sun Boy’s sudden loss of interest.Â  When adult Legion member Chameleon realizes that it’s the costumes, the codenames, the inverted rocket ships that he misses most of all, he names himself the advisory member of the new team (code-named “The Legionnaires”) and even goes on a recruiting spree to make sure that the team doesn’t drop down below fifteen members, which is a skeleton crew by LSH standards. 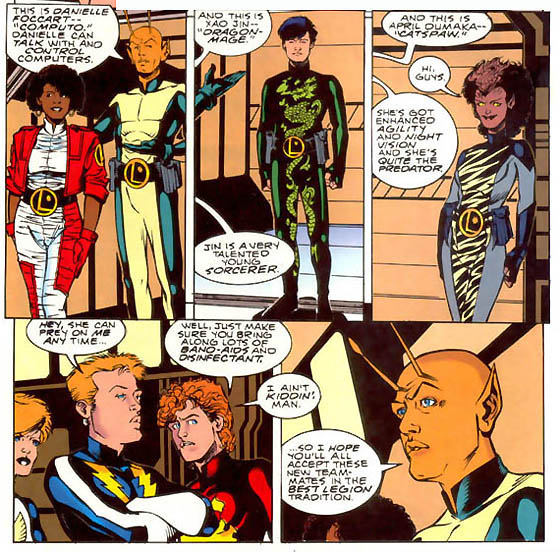 Heh.Â  The Legion kids’ first meeting is comprised of equal parts exposition and parliamentary procedure, certainly nothing interesting for our happy cat-girl.Â  Catspaw instead focuses her attention on things that are relevant to her interests, this time choosing Invisible Kid as her plaything. 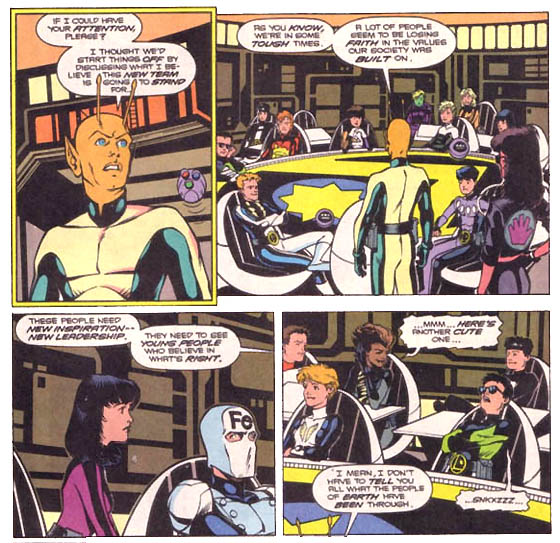 Lucky for Lyle somebody suggests that he lead the team, drawing her attention away from him and saving our headbanded boy from embarrassment.Â  The Legion’s first mission comes with the seeming reuniting of the Fatal Five, a team of villains that the Legionnaires themselves assembled years ago.Â  Faced with some of the nastiest villains that the team has ever confronted, Catspaw hesitates for only a kajillionth of a second before leaping into the fray. 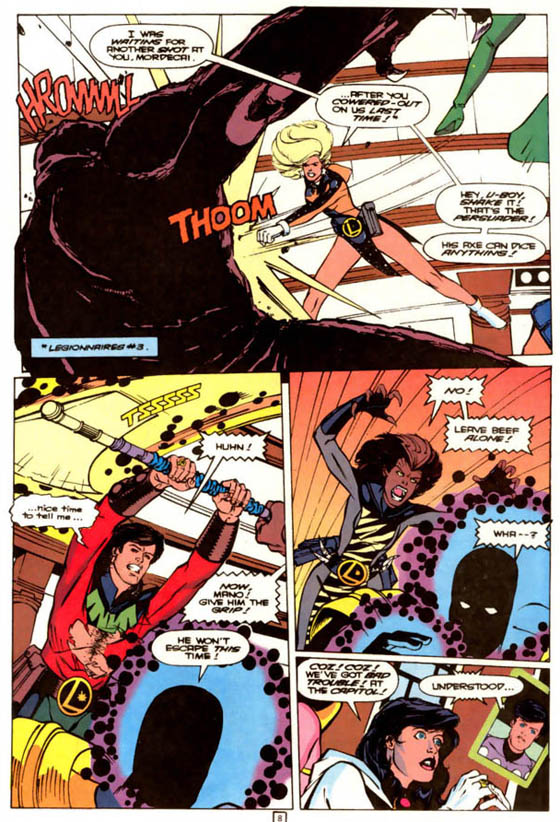 That man she’s attacking?Â  That’s Mano, a bad@$$ of such caliber that he killed his entire home planet single-handedly.Â  And that’s not a metaphor.Â  He literally blew up a planet WITH HIS HAND.Â  Mano and his partners have never seen anything like our April, though, and even the magical might of the Emerald Empress is taken off-guard. 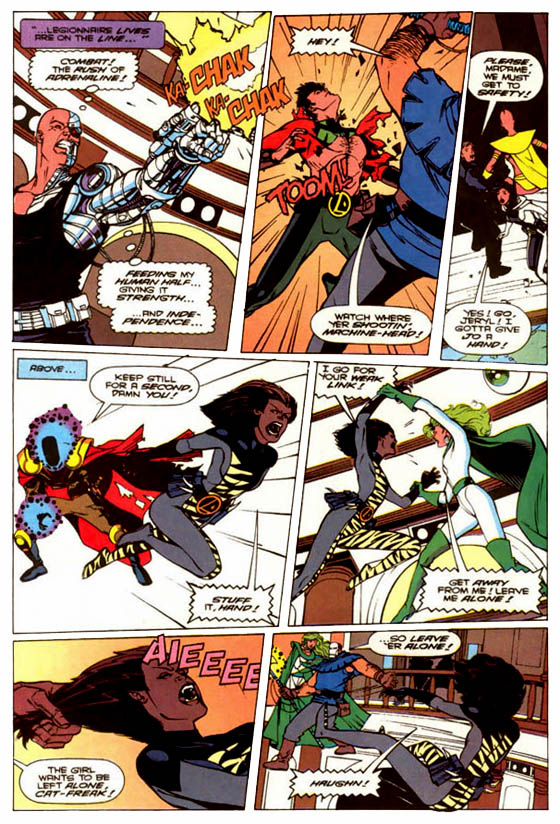 The Fatal Five are routed, thanks to the intervention of nearly the entire Legionnaire force, and Catspaw is accepted into their numbers as, essentially, a substitute for the deceased SW6 Karate Kid.Â  Immediately after their Fatal Five ordeal ends, though, the Legionnaires send out a delegation to planet Antares II, to investigate reports of strangeness in the area. 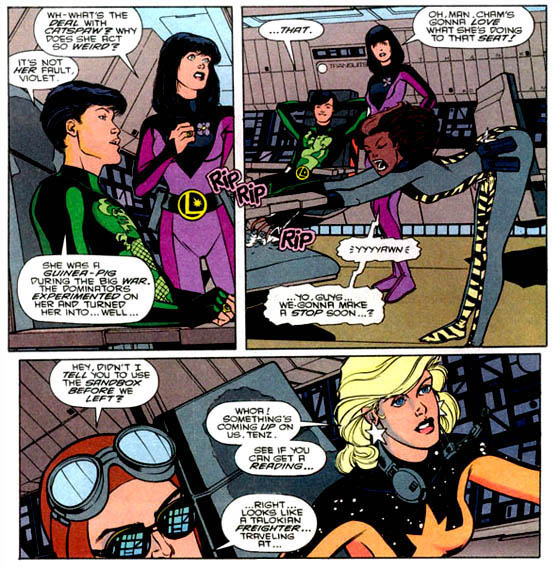 When Andromeda and Matter-Eater Lad are your team leaders, you can imagine things are gonna get a little bit… um…Â  unconventional during the battle.Â  The ship nearly collides with another, and it’s only Tenzil Kem’s piloting that keeps the Legionnaires alive, though they’re rendered unconscious by the crash.Â  When she awakens, Catspaw finds herself dealing with a familiar face… 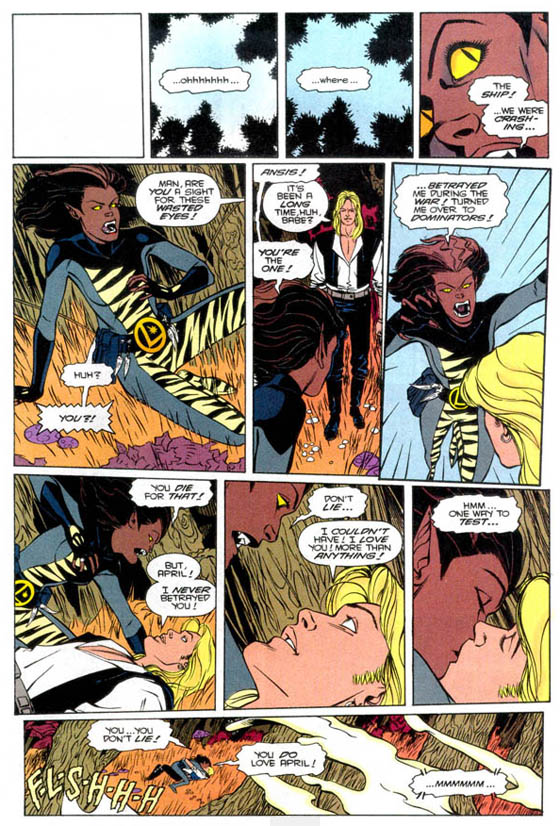 Awww…Â  That’s sweet and sad, all at once.Â  The very boy who betrayed her turning up on this far-flung planet is pretty much the definition of “unbelievable,” but Catspaw isn’t much for the whys and wherefores, preferring instead to deal with the warm and Fabio-esque reality of her former lover. 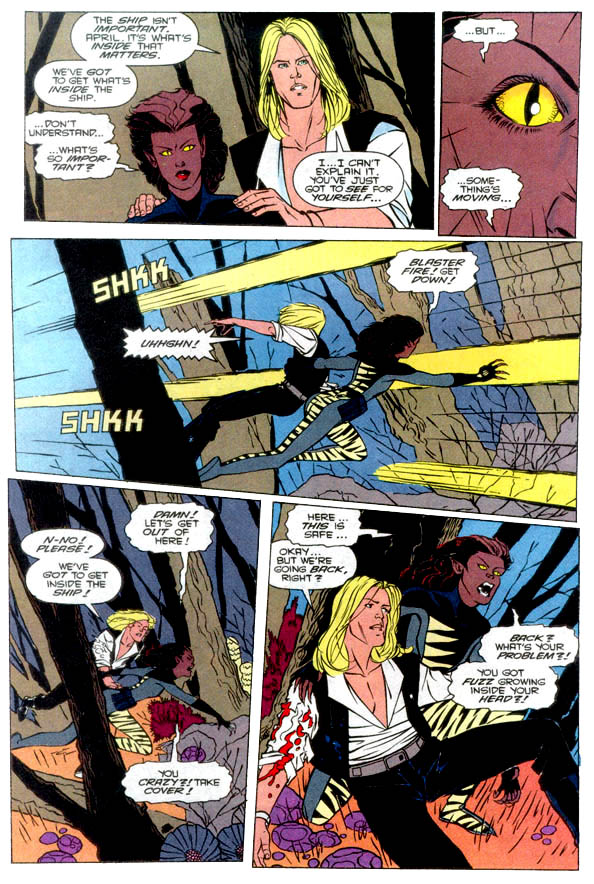 Ansis could say “thank you,” or possibly even mention that she saved his life, but instead, he continues obsessing about gaining entry to the strange “ship” nearby.Â  Catspaw isn’t really interested in any of this, but agrees to help, just because she digs him… 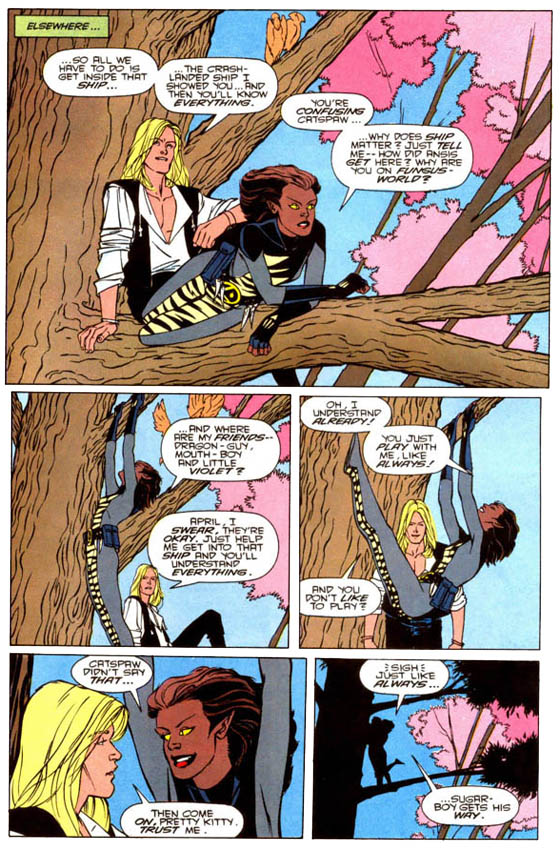 Elsewhere on the planet, Matter-Eater Lad and Dragonmage have found the truth of their situation.Â  Confronted with faces from inside their own minds, the two Legionnaires have come to realize that the Proties of Antares have morphed and are trying to manipulate them (albeit with good intentions.)Â  The twosome in green finds Catspaw, still hanging out (and making out) in a tree with her boy toy… 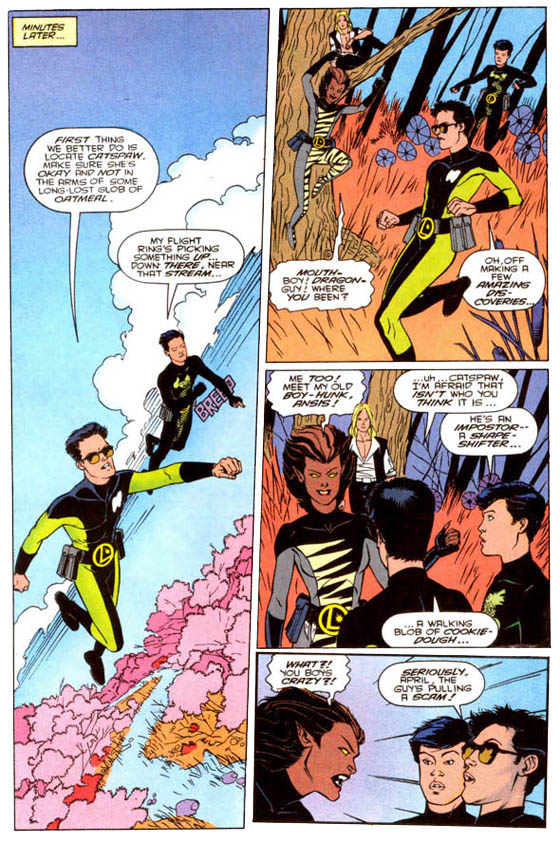 Once again, her instincts are everything, and Catspaw’s instincts are telling her that this is her ex-boyfriend, regardless of the logical question of HOW he got there, and she lashes out to protect the one she loves/lusts after. 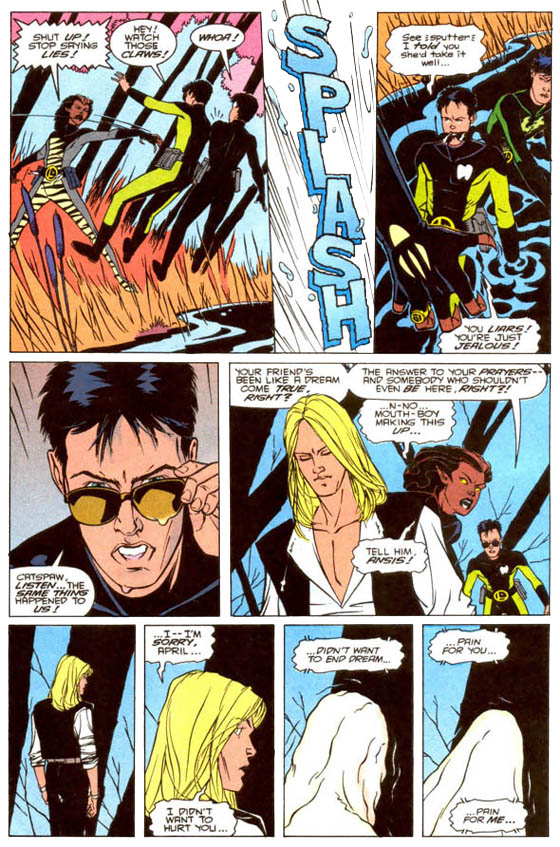 The revelation of the Proty masquerade rolls off April’s back as well, though, and quickly enough she’s more interested in other things.Â  When the mysterious ship is revealed to be chock full of Khund warriors, the Legionnaires decide to be very cautious and reconnoiter the area.Â  The problem is, nobody quite managed to get that message through to Catspaw… 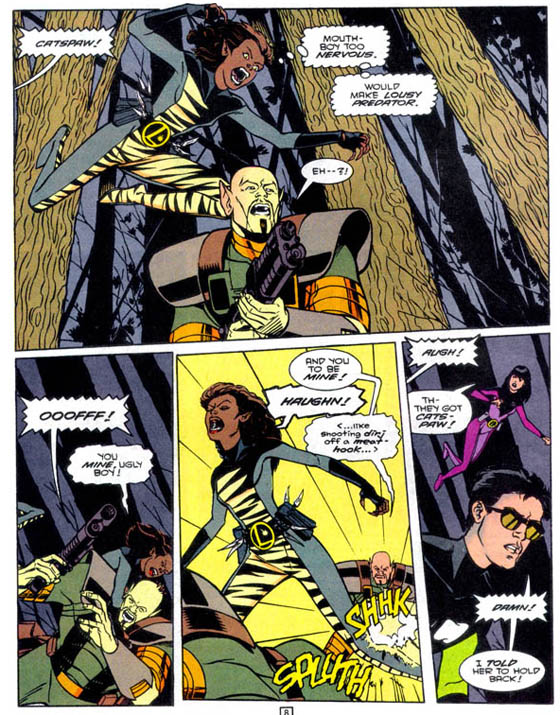 Catspaw fights the Khund warriors one on several, slicing and dicing her way through the empire’s toughest warriors, and making a fine showing of herself.Â  Unfortunately for her, and her Legion, the cosmic clusterschmozz known as “Zero Hour” has been undermining the fabric of her reality.Â  The SW6 Legionnaires are shown to be not clones at all, but instead time-lost duplicates of the Legion themselves, torn from the past by Glorith of Balduur.Â  As time anomalies begin surrounding them like bubbles at the end of a Lawrence Welk command performance, the Legion’s greatest minds come together to figure out what can be done…Â  Catspaw, as always, has no use for deep thoughts… 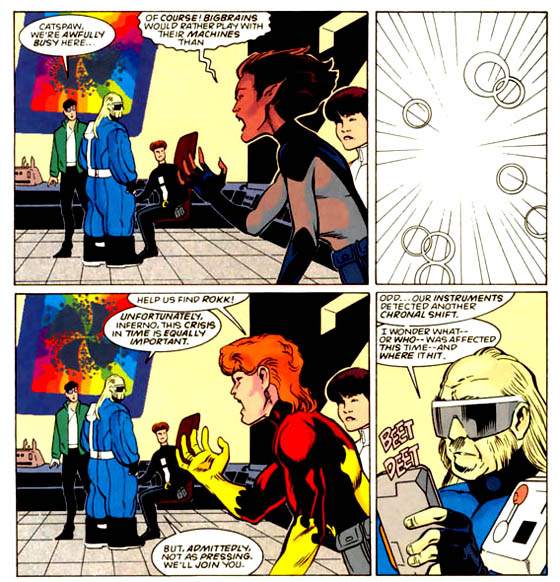 And with that blip, April Dumaka was wiped from the space-time continuum, with neither rhyme, nor reason.Â  Brainiac 5 and his duplicate, Brainiac 5 (together, thought, they’re Brainiac TEN) realize what has to happen: the SW6 Legion must merge with their older self and release their chronal energy, resetting the timestream.Â  The result?Â  A new 30th century, a new United Planets, and a pretty-much new Legion.Â  The team goes through many changes in lineup and modus operandi, even spawning knockoffs in the form of the Uncanny Amazers and the Work Force.Â  When Work Force ramrod Leland McCauley goes searching for recruits to replace those he’s lost to the *real* LSH, though, we find a familiar face… 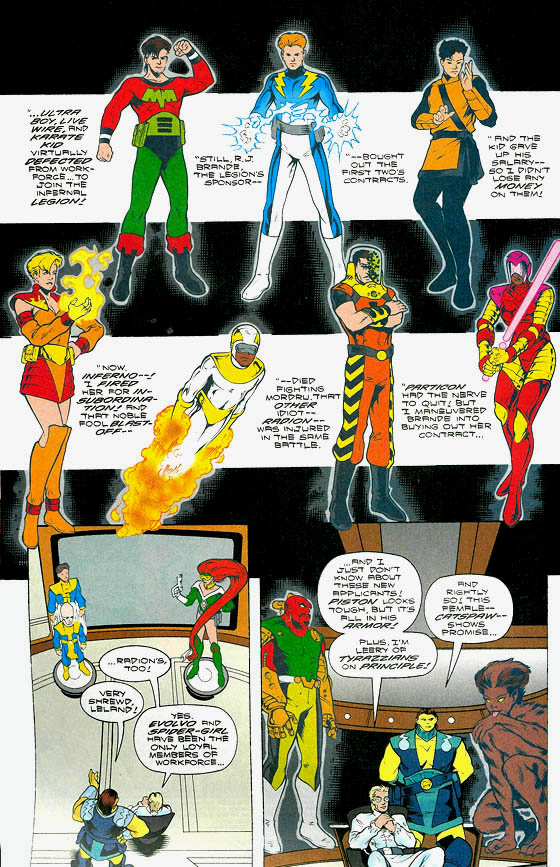 This is, to my knowledge, the only appearance of Catspaw post-Crisis, as changes came right after that forced the team to nearly sacrifice everything to save the U.P.Â  Catspaw was never heard from again, and has yet to appear in the Threeboot version of the LSH.Â  ButÂ even if she’s forgotten by the team, even by many Legion fans, I think it’s important that we touch on what it was that made her special:Â  heart.Â  Catspaw had little use for thinking, but wasn’t afraid to wade into the Fatal Five, or punch out a Khund if it meant that the world was a better place to curl up in a patch of sun in.Â  Though not a deep thinker, she managed to be heroic, mysterious, and most of all, fun in a time when the Legionnaires were having trouble finding much of that particular commodity.Â  Though her team and world disappeared, Catspaw nonetheless made her mark as a Legionnaire and as a hero, showing that even if you’re the type who just goes where the wind blows, you can still do some good when you get there… Or you can just click “Hero History” in the “What We Are Writing About” section on the main page… Collect ’em all!Â  When next we meet, she started in a pastiche of the Exorcist, and ended up co-leader of the team.Â  Her choice of names is suspect (especially if you asked Triplicate Girl) but her heroism is not.Â  Be here for our examination of… Computo!