Or – “All The Hatred May Be Somewhat Premature…” 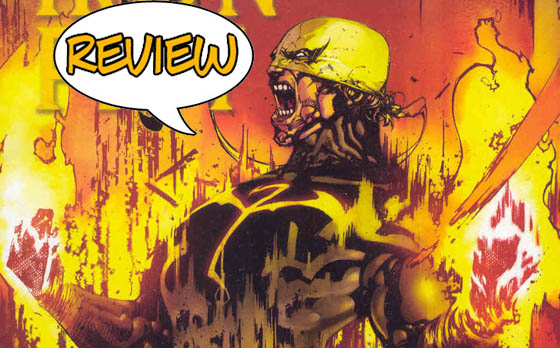 Brubaker and Fraction’s run on Iron Fist did what every relaunch really hopes to do: revitalize the character, revive interest in his stories, and add depth and versimilitude to the Iron Fist stories to date.Â  So much so that, when this new creative team was announced, pull list orders on the book (at Gatekeeper Hobbies, Huntoon and Gage, Topeka! Ask about our 70’s Vampirella black and whites!) fell by nearly half, and one of our more sardonic Spoilerites was heard to opine that the book will be cancelled within 18 issues.Â  Of course, it should be noted that some wits said that when they heard of the Iron Fist relaunch in the first place, and it took word of mouth to build the title up to where it was last issue.Â  Now, we’ve hit what Marvel and DC editorial love to call “a perfect jumping-on point for the title,” even though it seems that most of the readers I interact with either want to start with #1 or buy trade paperbacks.Â  Either way, it’s time to take a look at the new face of the Fist.

Previously, on Immortal Iron Fist:Â  Last issue’s revelation was merely the latest in a series for Daniel

Rand.Â  Initially surprised to think of the obvious point that there were 65 Iron Fists before him, he was even more overwhelmed to find that the previous bearer of the power, Orson Randall, was still alive.Â  He was franklyÂ stunned to be recalled to K’un Lun for a battle royale between his home city and the other Celestial cities, totally amazed to find that each of the other cities has their own protector (FAT COBRA REPRESENT, YO?) and openly breathtaken that his city might not be the wonderful golden paradise he had kind of remembered it to be.Â  He was shocked to find that Yu-Ti, the August Personage in Jade, was corrupt, and had created his family’s fortune with years of blood-letting and bad city planning.Â  In retrospect, Danny’s really a bit credulous, now that I think about it.Â  And, since shock follows shock, last issue, Daniel discovered that no Iron Fist save one had ever lived past the age of 33…Â  just as his friends broke in on his solitude with a cake to celebrate his own 33rd birthday.Â  Talk about a buzzkill…

This issue kicks off 10 years in the future, as a young boy races across the snowy courtyards of K’un Lun, crashing into his home, a scroll clutched in his hand, breaking through the door.Â  His mother (a familiar looking African-American woman with a seriously teased afro) scolds him for his lateness, but the child sternly returns her rebuke.Â  “You need to tell me the truth…Â  about how my father REALLY died.”Â  The boy holds up the scroll, showing a demon holding a man with a dragon tattooed on his chest upside down in the classic tarot card position of “The Fool.”Â  Misty Knight is taken aback by her son’s demand, and we transition back to the past, finding Daniel Rand and Luke Cage in the midst of a fight.Â  Neither man is very concerned about the dozen or so guns pointing at them, instead discussing Danny’s relationship issues.Â  Luke knocks a half dozen punks down, bullets bouncing off his chest, as he asks “so, this is why we’re out here?Â  Just so you can avoid having a real talke with yo’ girlfriend?”Â  Iron Fist sails into action, spinning, kicking, knocking guns awaywith his mad skills.Â  They drive away the gang members, and help a man sprawled on the ground (apparently the victim of some sort of attack) to his feet.Â  The man thanks Iron Fist in chinese, and Danny offers an ambulance, but the man demurs.Â  “All these years,” muses Luke Cage, “you’d think I would’a picked up some Chinese.”Â  “He says he thinks you a very attractive man,” replies Danny.Â  HA!

The vicitim of the beating catches a cab, and upon returning home, we discover that he is more than he seems.Â  Riddled with scars, his skin peeling and breaking, he speaks to a mirror, ecstatic in the power of the dragon.Â  “Your holy servant is ready to kill again,” he says, as the face of a dragon (presumably his master) appears in the mirror.Â  We flash back 125 years of so, to a sudden story of Kwai Jun-Fan, the Iron Fist of the late 1800’s, as he trudges into a frontier town ala Caine from Kung Fu.Â  (The parallels are certainly intended, as Caine’s name is, I believe, Kwai Chang Caine.)Â  Jun-Fan is accosted by a local, but finds that seemingly the entire town is arrayed against him, and they speak Chinese, oddly enough.Â  Back at Danny’s birthday party, we see his friends eating cake and trying to cheer the man up, but he’s just found out that the odds are against him making it out of this year alive, so he’s unhappy.Â  Misty pulls him back to the bedroom to give him her present, but Danny tries to have a conversation about whether they’re a couple.Â  Note to Iron Fist: when a beautiful woman wraps herself in red leather and offers you to unwrap her as a gift?Â  You might consider holding the relationship talk for later…Â  Just some advice from the old married man.

After a brief meeting during which we find that Jeryn Hogarth thinks that a leftover Hydra cell is still attacking RandCo, we see Kwai Jun-Fan fighting his way thorugh the entire town of Dirtwater, East Hell, cracking skulls, but mightily overmatched.Â  “I have traveled to this country of violence to aid my brothers, even as they labor to lay the rails that will spread evil from ocean to ocean…Â  Now, it takes all my power to protect myself.”Â  Back in New York, the mysterious Dragon person stands in Times Square, ruminating on his history, and helpfully expositioning his backstory.Â  “I’ve been waiting on thie island for 75 years because it was prophesied that a secon Outworlder would emerge from K’un Lun with the chi of Shou-Lao the undying…”Â  EVERYBODY GOT THAT???Â  He follows Daniel Rand, and picks a fight that, amazingly, the Iron Fist can’t finish in a few seconds, sensing openings in Danny’s form and quickly pressing his advantage in the fight, forcing Danny to call on the Iron Fist.Â  The stranger quickly inhales the fiery power of Shou-Lao, snuffing Danny’s attack in seconds.Â  Back in Eighteen-Eighty something, Kwai Jun-Fan falls, but both men hear through the haze of blood the same words.Â  “I am a serveant of the Ch’i-Lin.Â  I am the one who kills the Iron Fist.”

For the first issue of a new team, it follows pretty seamlessly from what has gone before, without any real missteps save a couple of moments of dialogue that ring funny.Â  The moments between Luke and Danny and especially the interaction with Misty and Danny feel as genuine as before, and the visuals (by Travel Foreman in the present, and the legendary Russ Heath telling the ‘Times Past’ tale) are still excellent, without much in the way of jarring changes from the previous art team.Â  Of course, Heath has been handling the flashbacks for several issues now, so that helped.Â  Travel’s work here reminds me of Leinil Yu, with a strong grasp of anatomy and greater depth of field.Â  The issue is a pretty gripping one, taking us through Danny Rand’s breakneck day at high speed until the payoff at the end puts the exclamation point on it.Â  If anything, the implication that there’s a person who kills IF’s might be considered somewhat out of left field, but then, the introduction of Orson Randall felt that way at first as well…Â  It’s a very strong issue overall, earning a pretty impressive 4 out of 5 stars, and a cautious feeling that everything will be okay for Danny.Â  Well, creatively, I mean.Â  His life is pretty $&@(ed up right now…