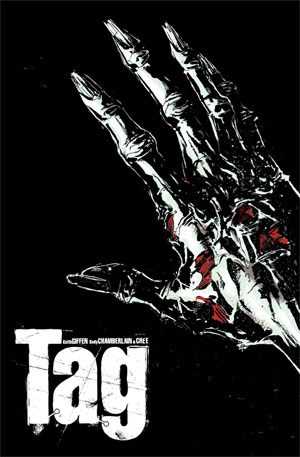 Next week on the Major Spoilers Podcast, we’re taking a break from DC trade titles and taking a look at Tag Vol. 1 from Boom! Studio.

Tag Vol. 1 TPB
Writer(s): Keith Giffen
Artist(s): Andy Kuhn, Kody Chamberlain
BONUS: Included in TPB form for the first time as an “extra” is Keith Giffen’s “10” one-shot — ten innocent people become unwilling contestants in a game of death. Given 10 bullets and a gun, it’s kill or be killed as they’re forced to hunt the other 10 contestants! In the dark, horrific tradition of Battle Royale!

Spine-snapping horror in the tradition of the movie The Ring! An average joe strolls down the street after a fight with his girlfriend when a random stranger TAGS him, handing off an ancient curse! He literally begins to die â€“ and rot â€“ seeing his body begin to decompose every day before his very eyes. Cursed, he must either surrender, or find the next victim to TAGâ€¦ Collecting the three issue mini-series from white-hot Wizard Magazine favorite Keith Giffen and 30 Days of Night Bloodsucker Tales artist Kody Chamberlain!

If you have read the series, post your comments below, and we may use them on show.