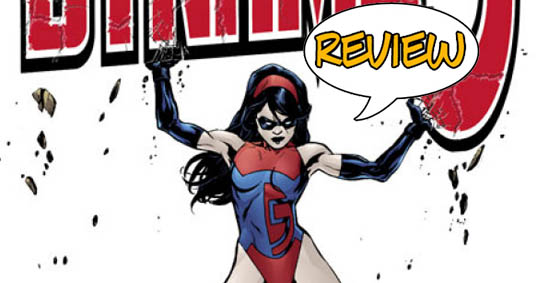 Okay, I admit it.Â  One of the less-important draws (no pun intended) of this series is the wonderful work that artist Mahmud Asrar puts into female leads Slingshot and Scrap.Â  Aside from being well-sculpted ladies (and, DIFFERENTLY sculpted at that) our feminine protagonists have personality, in their faces, the way they move and stand, even in their subtlest body language.Â  So, when I heard that this issue was going to feature Scrap in (essentially) solo action, I can’t say that I was terribly disappointed.Â  Certainly, it’s a team book, but having a super-strong proto-goth girl busting up the place can’t be bad for sales, right?

Previously, on Dynamo 5:Â  What Captain Dynamo really needed was some of the ultra-rare pink-polka-dotted Kryptonite, known for killing the libido of invulnerable flying types.Â  With more groupies than the

entire rosters of the Rolling Stones, KISS, and the Barenaked Ladies, Cap made sure that his super-seed didn’t go to waste.Â  Having accidentally fathered at least six children over the years, Cap was the ultimate deadbeat dad, until an encounter with a contract killer called Widowmaker cut short his career in superheroics-slash-philandering.Â  In recent months, the Cap’n’s widow, Maddie Warner, collected several of hisÂ accidental offspring, exposed them to the radiation that gave the big guy powers, and set them loose on Dynamo City.Â  Unfortunately, due to combination of bad parenting, miscalculation, murderous super-villainy and hidden secrets, the kids known as Dynamo 5 have now gone their separate ways, leaving Tower City without protector for the first time in, roughly,Â forever.Â  The villainous contingent have naturallyÂ run rampant across the city, leaving only the masked woman named Vigil to fend them off.Â  But now that Vigil has fallen, (as seen last issue)Â it’s up to one of the original D5ers to step up to the plate, and show that she has the Hawkeye credentials to go from hothead to ramrod.Â  Can Scrap seal the deal?

We ended last issue with Scrap confronting a group of villains in an alley, seconds after Vigil had fallen.Â  This issue continues from that moment, as the villains snark that they heard Dynamo 5 broke up.Â  “You heard wrong,” deadpans Scrap, before leaping into action.Â  Shrugging off electricity, hydro-blasts and punches, she frees Vigil, and the twosome trade quips as they show how outnumbered they AIN’T.Â  “You may have taken down Radia and Deadweight, but they’re rookies compared to Breakwater!” cries one of the villains, and the twoÂ heroes stand for a moment in amazement.Â  “Did.. she just refer to herself in the third person?” asks Scrap, and Vigil confirms it.Â  Heh.Â  “I hate when they do that,” Scrap replies.Â  One punch floors the villainess, and Scrap calls in F.L.A.G. (The Foundation For Law and Government) for the pickup.Â  Vigil takes off into the night, but not until she spray-paints her calling card on Deadweight’s prodigious gut.

Elsewhere, Widowmaker drinks a flute of champagne with her mysterious powerbroker (who you just KNOW is going to turn out to be Augie’s boss, the ineffectual middle management suckup of F.L.A.G.) and she laughs how easy it was to manipulate the villains of Tower City, calling them halfwits, causing the mystery man toÂ rage out of control.Â  “Do you mean to tell me you sent halfwits to carry out this mission?” roars the man in the shadows before she backpedals madly.Â  As Widowmaker tries to explain herself, heÂ cuts her off,Â snarling how easily SHE can be replaced as well.Â  Cut to Eastbridge, Texas, where the former D5er known as Scatterbrain and his football squad are facing their old foes from…Â  I dunno, let’s say “East Cowbridgetonburg.”Â  Scatter (aka Gage Reinhart) steps up with a change to the playbook, which turns out to be dead-on, winning them the game.Â  We see Gage’s half brother Hector Chang (aka Visionary) watching from the stands, obviously troubled by what his telepathic brother might possibly be doing…

Back in Tower City, Scrap tries hard to keep up with Vigil as she runs across the rooftops, leaving an almost Tick-like trail of destruction behind her super-dense form as they go.Â  Scrap tries to explain why the D5 broke up, but Vigil isn’t having any of her rationalizations.Â  “You set yourselves up as the guardian angels of Tower City, let it’s citizens rely on you, then you just vanished and let them fend for themselves!” she accuses, and Scrap can’t quite rally a defense.Â  They’re interrupted by another batch of idiot villains (Blast Furnace and Rapier by name)Â but Vigil and ScrapÂ easily manhandle their attackers.Â  Scrap finds herself troubled by the thought that she’s left the city undefended, but before they can do anything, another cry for help is heard.Â  “Oh, you’ve gotta be KIDDING me…” she laments, as they leap into action once more.Â  Back in Texas, Hector confronts Gage about using his telepathy for immoral purposes, and Gage doesn’t deny it, claiming that he just used his natural born abilities, like every other player on the field.Â  He then pointedly asks if Hec is going to turn him in, but hisÂ sib has no quick answer for him.Â  While Hector considers his options, we cut back to the Dynamo 5Â HQ, beneath the Tower City docks, as Scrap apologizes for the mildew smell, explaining about the flooding seen in recent issues.Â  She takes a few moments to talk about Tower City, then cuts to the chase.Â  “Dynamo 5 needs to return.Â  So, what do you say?”Â  We see that she’s addressing Vigil, Quake (a superpowered teen who idolized the late Captain) and the mother/daughter team known as The Firebirds…Â  All we need now is a Canadian berzerker, and we’re well on our way to taking over the comics industry!

I have to say, this issue is extremelyÂ  well crafted in terms of the plot, getting us from point A (a town without defenses) to point B (the all-new all-different Dynamo 5) efficiently and with a natural through-line.Â  The side trip with Gage and Hector is compelling, and raises questions similar to what Stephen, Rodrigo and I discussed about mind-control powers in a recent podcast…Â  Bringing in characters that writer Jay Faerber has (mostly) used before in his other works is nicely done as well, showing that we are in an extended universe that reminds me of the 70’s Marvel comics, before this kind of crossover became passe.Â  In a really interesting meaningless sidebar, Scrap spends the whole issue with her long mane of black hair tied up, giving the illusion that she’s too busy to worry about it with all the fighting she’s been mired in.Â  It’s aÂ subtle artistic touch, but a nice one.Â  Mahmud Asrar’s pencils are, as usual, nicely done, bridging the gap between aÂ visually simplerÂ Bruce Timm style and the semi-photo realistic Image house style (see Mark Silvestri.)Â Â The layouts areÂ clear and pleasant throughout, even when showingÂ fight sequences in the dead of night.Â  Jay Faerber has yet to hit a really sour note for me with Dynamo 5, keeping the stories flowing naturallyÂ from one another, without sacrificing the kind of detail the make me read a title over and over for the subtle detail.Â  Dynamo 5 is the total package, earning my respect (and my 3 bucks) month after month, and Dynamo 5 #15 does nothing to change that, nailing a 4 out of 5 star rating.Â  If you’re looking for a nice read without constant continuity implants, crossover blues, or timing issues, I’d say this is the book for you…