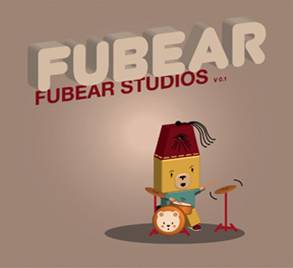 (San Diego, August 13, 2008)Â Â  — What is Fubear? Fubear is the schism that exists between “funny ha-haâ€ and â€œfunny-strange.â€ At least thatâ€™s what creator David Slade tells us.

Coming this August from IDW Publishing, Fubear is a nice, small, square hardcover collection of the illustrations which served as inspiration for the animated comic/horror short “Meatdog: Whatâ€™s Fer Dinnerâ€, a short film that premiered at Comic Con in July 2008 and will play to the over seven million users of Xbox LIVE this fall.

David Slade, the man behind the bearâ€”Fubear Studios that isâ€” is a motion picture director best known for his 2005 thriller and cult hit Hard Candy, as well as the 2007 movie adaptation of the IDW graphic novel 30 Days of Night, which opened at No. 1 at the box office. Slade, who originally trained in fine arts in his hometown of Sheffield, England, works not only in film and animation, but is also known as a brilliant graphic artist.

â€œMaking films, dark thrillers, sometimes you need some light, but it has to be sincere,â€ says creator David Slade, â€œso I set off in search of my psyche in just my underwear, taking with me a handgun, a crutch, a pencil, and a shovel. In the end they all came to play, but mostly just the pencil. The pencil became a computer and various printing techniques, and that most recently became animation. I love learning craft and technique, and I delve into my psyche to get the meat.â€

Fubear Studios brings a collection of Sladeâ€™s characters to life with his vivid illustration style. Included are “Meatdog” himself (a dog made of meat cuts); “Bearleftbear” (obsessive-compulsive bear in a car); the “Alienbears” (hungry, carnivorous octarian creatures from another universe); “Drumming Dogs,” “Hazmat Bears” from a chemical psychoverse, and many more.

In â€œMeatdogâ€, the animated short for Xbox, Slade sends a church of evil occult pigs, a carnivorous rabbit, and a slobbering hound in pursuit of Meatdog, pitting our unlikely hero against, well, unlikely villains.

Discover the world of Fubear Studios when the hardcover book hits shelves in August.