Or – “Personally, I Blame Kirsten Dunst.” 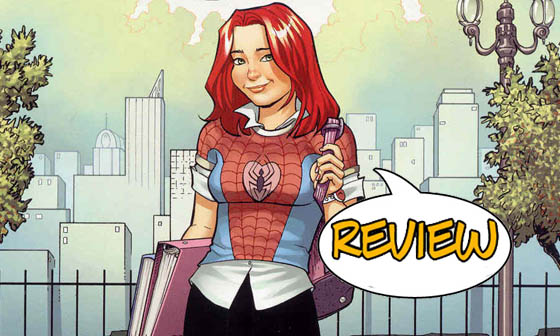 So.Â  I’ve been making the joke for months now, and I’m officially ready to retire it here and now, after one final telling:Â  “Call the Law Firm of Boucher, Likes, McFadden, and Mephisto for all your divorce needs!Â  We’ll make it like your marriage never happened!!!”Â  Given that current edict from the EIC, it seems a little bit odd that this title even EXISTS anymore, but any attempt to bring younger readers (or, indeed, female readers) onboard is a welcome change of pace.Â  Add in a little Terry Moore, and you’ve got my attention…

May Parker and her friend Anna Watson had a plan.Â  It was a story as old as time, a familiar one to any old-school jewish mothers in the house, a story called “think of the beautiful children!”Â  The two old bats conspired for months to get May’s sister’s bespectacled nerd offspring in the same room with Anna’s flighty trollop of a niece, to no avail.Â  When it finally did happen, it was magic, and faster than any of us could say “You just hit the jackpot,” a super-couple was formed.Â  This series seems to take place in it’s own little universe, which may or may not be outside of continuity, but seems to owe more to BMB’s Ultimate Spider-Man than the the actual old-school continuity.Â  Even so, apparently, the story of Billy Joe and Bobbie Sue, two young lovers with nothing better to do Mary Jane and Peter Parker has it’s fans (albeit probably not in Marvel editorial, if you believe the internet rumors) and now it’s time for MJ to have her own Brand New Day…Â  Now, you may be asking yourself (and, by extension, the computer screen that you think of as asking me) what happened in the previous series?Â  Hell, I don’t know, what am I, Brainiac 5, here?

We kick off our festivities with a hundred foot Spider-Man atop the Empire State building, clutching Mary MJane in his hands and swatting biplanes out of the sky with giant webbed hands.Â  Wait, what???Â  “Is it love that has driven the beast insane?” asks the voice of an unseen newcaster. “Does that sinister mask hide a jealous Romeo?Â  We may never know because even as I speak, the plans have ben given orders to shoot down Spidey-Kong!”Â  The planes swarm, as Spidey and MJ have a discussion about dating.Â  “I finally get up the courage to ask you out, and you say, “Gee, I don’t know, let me think about it?”Â  Heh.Â  Mary Jane tells him she’ll go out with him, but suddenly the giant Spider-Man is dislodged by an explosion, and they both fall to their inevitable death…

…just as Mary Jane wakes up as her alarm bleats the 7:00 warning that it’s time to get ready for school, and she heads off to Midtown high for the first day of her sophomore year in high school.Â  God, I’m sweating just typing that…Â  She arrives to find that her first class contains not only Gwen Stacy (rival for the affections of Petey) and Harry Osborn, who is as icy as my mother-in-law after a fart joke.Â  MJ tries to come to terms with her problems with Gwen, and hopes that Harry will do the same with her, but the spitball he lodges in her hair makes that seem unlikely.Â  MJ’s second class is Acting 101 (they have that in high school?) and we’re introduces to Zoe McCall, who steps forward and conveys anguish, loneliness and the clear indication that she’s in deep trouble, a moment that Mary Jane seems to be the only one who understands.Â  “She was so convincing that we all thought she was a good actress.Â  Nobody realized she wasn’t acting.”Â  My plothook sense is tingling!

After school, MJ hangs out with pal Liz Allen, who lets her know that there’s an opening on the cheerleading squad, but Mary Jane points out that she has to work for spending money, as her mom even makes her pay her own phone bill.Â  (TINGLLLLE!!!!!)Â  Peter Parker arrives, and tries to be casual about his epic love for MJ.Â  Liz points out that he doesn’t even seem to be sweating (“I’m hot!” cries Peter, fearing discovery of his spider-powers, to which MJ responds “Got that right.”Â  Heh.) but their banter is interupted by Flash Thompson trying to clock Pete in the head with a football.Â  Peter suddenly has to make an excuse to dash off, (I wonder what *THAT* could be about?) and Mary Jane remarks that he totally needs a personal organizer.Â  Wait…Â  From the opener, I thought she *KNEW* the secret, but this implies different.Â  Weird…Â  Mary Jane heads home to an empty house, and eschews mom’s casserole for squeezy cheese and soda, only to get a very tense phone call from her absentee mama.Â  (TINGLLLLLLLLLLEEE!!!)Â  MJ gives up on studying, engaging in some very teenage angst, lamenting, how “in my heart I think, yeah, it owuld be nice to know somebody cared enough to be here for me, y’know?Â  Maybe look in on me once in a while…”Â  As she thinks this, a masked figure peeks in the window, then webswings off into the night, as Mary Jane sighs alone.Â  “There’s always tomorrow.Â  I have lots of tomorrows.”

Overall, this is a well-done issue, with Terry Moore’s script conveying just the right edge of teen angst without making me want to strangle Miss Watson with a Hot Topic t-shirt, or something else topical that you kids like.Â  Maybe something to do with those MTV video games you love so much.Â  Craig Rousseau’s art is very nicely done, though his Spidey is a bit more cartoony than I’d like, I think I can forgive it in a title aimed at (what I presume to be) tween readers.Â  It’s not Watchmen, but judged on it’s own merits, I enjoyed this issue a lot, though the Moore cover art makes Mary Jane much cuter than the interiors.Â  Of course, since she’s all of sixteen here, and I’m old enough to be the creepy stalker who lives down on the corner, I s’pose we should cut that line of thinking short.Â  Bottom line?Â  Spider-Man Loves Mary Jane Season Two #1 rates a strong 3 out of 5 stars, giving us the kind of comic we could safely recommend to a theoretical niece or nephew who enjoyed the Spider-Man movies but doesn’t have the stomach for violence.Â  Given the seeming dearth of All Ages titles out there, it’s good to see one that’s well done.