Hulk #5 Back to Print

Thor and the Red Hulk got into it in Hulk #5, and to make sure everyone has a chance to get their hands on the sold out issue (at the distributor level), Marvel is going back to press with a new cover of the Jeph Loeb series.

“Five issues.Â  Five sold out.Â  And the second printings too!â€ said Loeb. â€œI’ll have to tell McGuinness’ kids to stop buying so many copies!Â  Seriously though, I gotta thank Warren Simons and the entire Thor crew who were so helpful at getting the God of Thunder to guest star in this issue.Â  And rest assured, Thor vs. Red Hulk — the Grudge Match isn’t far behind.Â  All of this builds to next issue when Ol’ Greenskin and the Rulk finally have it out — and I can promise you, only one of them walks away!â€

HULK #5 SECOND PRINTING VARIANT (JUN088081)
Written by JEPH LOEB
Pencils & Cover by ED MCGUINNESS
Inked by DEXTER VINES
Colored by JASON KEITH
With a new cover featuring the powerful interior art of McGuinness, and a story that pits Red Hulk against the mighty Thor, no Marvel fan can afford to miss this shocking battle! And just what happened to green Hulk and A-Bomb? 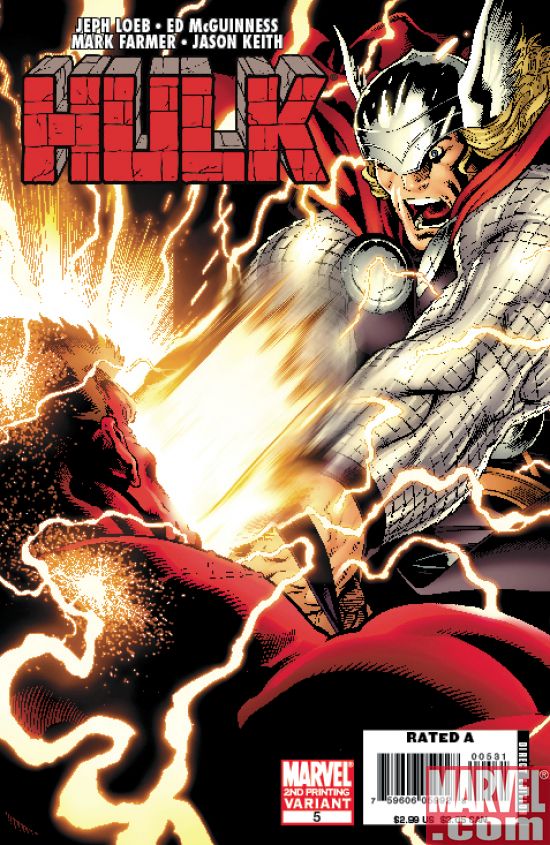