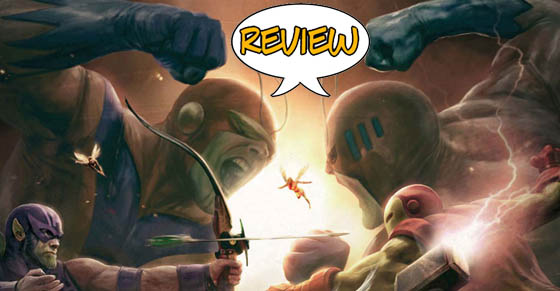 The Marvel Universe is in chaos, under seige by an alien race, and (depending on what order you’re reading the books in) gearing up for or fully engaged in an all-out war with the Skrull Empire.Â  It’s one of those ideas that sounds great in theory, tying all the company’s project together into an overarching plot, but the actual execution has been leaving me less than satisfied.Â  This issue promises to examine the mysterious return of Captain America (who, as of last report, is, as you might have heard, still dead) andÂ possibly continue explaining things that happened in the very first issues of this series, four or five years ago…Â

Previously, on New Avengers:Â  A mysterious ship crashed in the Savage Land, and the Mighty Avengers

(representing the establishment, the status quo, and The MAN) and New Avengers (representing the rebellion, the urge to think for oneselves, and other filthy hippie ideals) both arrive to check on who is onboard, only to be surprised by the revelation that…Â  it’s them!Â  Marvel heroes pour out of the ship, and both teams of Avengers are suddenly forced to fight the friends, lost loved ones, and in some cases, themselves.Â  During the battle, Spider-Man is separated from the pack, battling the shipborne Captain America, and encounters Ka-Zar and Shanna the She-Devil, the protectors of the Savage Land.Â  After some Laurel and Hardy routines involving who is and isn’t a Skrull, Spidey and Mr & Mrs Plunder find Skrulls harvesting the Savage Land’s supplies of vibranium for (obviously) some sort of nefarious purposes.Â  The threesome try to figure out this plot point, dating back to issue #1 of New Avengers, but their thought processes are interrupted by the return of the Star-Spangled Sentinel, mad as hell, and not gonna take it anymore.Â  The invasion… has begun…

Spider-Man is hopeful-slash-angry at the sight of the living legend of World War II, sputtering that this can’t be Cap, even though part of him hopes that it IS Cap.Â  “The real Captain America DIED.Â  He was SHOT.Â  On TV…Â  He’s gone.”Â  The Captain grits his teeth in his best John Wayne fashion, stepping forward, and snarling “Stop your talking, SKRULL.Â  I don’t believeÂ  a word you say.” He then appeals to Ka-Zar for help, but the K-man repeats what Spidey said, and refuses to help.Â  Captain America turns to leave, and Shanna brandishes a spear to stop him.Â  Before she can move, before ANY of them can move (and Ka-Zar and Spidey ain’t fat guys in little coats, mind you) his shield has shattered Shanna’s weapon, and Cap is in combat with Zabu (who has a TAIL!Â  Sabre-tooth tigers don’t have tails!!Â  SKRULLL!!!!!!!) Spidey and the Plunders trip all over themselves to get to Cap (Spider-Man keeping Shanna from shish-ka-bobbing Cap with her blade) when suddenly a dart strikes Cap in the neck.

Ka-Zar’s hidden tribesman start to attack, but the king of the Savage Land holds up a hand, and they all watch as Cap literally melts in front of them.Â  “I… I am Captain America…Â  I am a human.Â  I am a male…Â  I… I am an Avenger.”Â  The Skrull passes out, and Spider-Man rages at the unfairness of it all.Â  Shanna takes a moment to put her knife to Spider-Man’s throat, and stab him with the toxin that returned “Cap” to his Skrullian form.Â  “Still pink,” she deadpans.Â  “Yeah, and now it’s all bleeding and numb.Â  Thanks a ton!” shoots back Spidey, as she finally lets him go.Â  The Skrull thinks back to his selection, how the Queen Skrull (in the body of ((sigh)) Spider-Woman) gave him his sacred suicide mission, sending him out to become a martyr to their weird quasi-religious cause.Â  We also see that they DON’T have Cap’s memories (as they do the members of the Illuminati after their disastrous attack on Skrullians after the Kree-Skrull war years ago) so they feed him the other heroes’ memories OF Cap.Â  See the story tie in to (I think) Avengers Annual #17, 20 or so years ago, when theÂ team ended up fighting Skrulls alongside the Fantastic Four, and implanting fake memories to make him think he’s Cap.Â  He then spearheads the escape of the other heroes from the Skrull ship, bringing us back to the moments right before Secret Invasion.Â  This whole memory takes place in seconds, and we cut back to Spider-Man and company just in time for them to hear gunfire and run away from the dying Cap-Skrull…

And we’re done.Â  Seriously.Â  Some of you reading may be thinking “Was that all?”Â  Don’t feel bad, I read the issue, and felt the same way.Â  Much like the issue of Mighty A’s a week or so ago (I reviewed it on the podcastÂ a while back) this information, while interesting, is inessential.Â  Back in the day, Stan and Jack would have done this ENTIRE ISSUE as a three-panel flashback at the beginning of an issue, then made whatever happens next the meat of the story.Â  It’s interesting, in a way, to see such versimilitude and depth being given to the alien aggressors, but the underlying point of this story seems to be that the evil Skrulls must be stopped.Â  Much as “The Killing Joke” unnerved me by making me almost sympathize with the mass-murdering #&@$head known as the Joker, this issue (and the Elektra issue as well) are trying to make me feel empathy for the shape-shifting invaders.Â  Fine enough, and a very post-modern viewpoint, but I don’t WANT to sympathize with these shmucks.Â  They’re killing humans left and right, destroying helicarriers, undermining Spider-Women and making Marvel comics virtually unreadable if you don’t want “Secret Invasion Background Vignette #1,012.”Â  From a craft point of view, the issue is well-drawn (by Billy Tan, bringing an almost Phil Jimenez vibe to the book) and the dialogue is classic Bendis, but… NOTHING REALLY HAPPENED.Â  We saw two minutes of fight, a looooong flashback in the mind of an alien footsoldier, and then we’re done.Â  Frankly, no matter how competent, it’s just not 3 bucks worth of quality.Â  New Avengers #43 ranks a right-down-the-middle 2.5 out of 5 stars.Â  It’s not a bad book, it just sort of… happened.