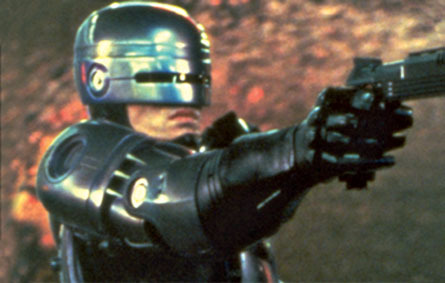 I like Darren Aronofsky.Â  I think his films are something quite different than what we get from the usual mill of standard movie fare.Â  So when I heard he is going to be directing the Robocop reboot flick, I’m suddenly excited about the franchise, even if Peter Weller won’t be in it.

“RoboCop,” which is being fast-tracked for a 2010 release, becomes the first potential tentpole to come together since Mary Parent took the reins of MGM in March. Aronofsky’s involvement has been one of the worst kept secrets, with rumors rampant in the blogosphere that “The Fountain” helmer was eyeing the project.

There has been a flurry of franchise reboot films announced over the last couple of months.Â  Is this a good thing, or a bad thing?Â  For years H’wood has been diving into the remake bin in hopes of attracting new audiences, and I had hoped with the tidal wave of comic properties being adapted, tinsel town was going to put a stop to the remakes for a while.