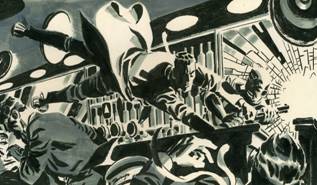 For those of you who have been pining away for news on Darwyn Cooke’s next project, your wait is over.Â  IDW Publishing announced last night that Cooke is creating four original graphic novels based on the Richard Stark “Parker” crime fiction series of books.

Originally published in the 1960s, Starkâ€™s novels featuring the Parker character – The Hunter, The Outfit, the Mourner and The Man with the Getaway Face – are tough and tautly composed.Â  The Parker character is known as one of the most fascinating and compelling criminals in crime fiction. Lee Marvin played Parker in John Boormanâ€™s film Point Blank.

â€œWorking with Darwyn has been one of the highlights of my editing career; our sensibilities mesh on a lot of levels. Itâ€™s a true pleasure and privilege to be associated with him on this project,â€ said Scott Dunbier, IDW Publishingâ€™s Special Projects Editor in a prepared release to the media.

You’ll have to wait until next year (probaby summer) before you’ll see the first installment from Cooke and IDW.Â  If you are at the San Diego Comic Con, stop by the IDW booth (#2207 and #1705) and pick up one of three limited edition Darwyn Cooke illustration cards.Â  These are limited to 500 each, so I’m betting they will be gone by end of day today.