SDCC’08: Angel of Death Coming to the Web 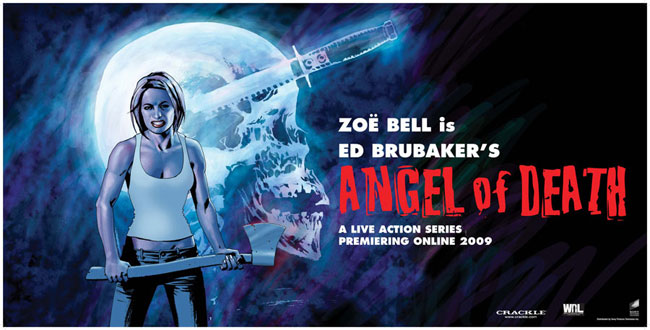 While I’m sure there are a number of crackpots out there that already think the Angel of Death is on the web, the Ed Brubaker version is coming to the web as an original live-action series in 2009, that you’ll be able to see on Sony Picture Entertainment’s Crackle website.

The web series stars actress/stuntwoman Zoe Bell, whom most of you remember from the Grindhouse feature Death Proof.

Angel of Death depicts a remorseless assassin (Bell) in the employ of a ruthless crime family. After suffering a severe head wound, she becomes so haunted by her victims that she decides to kill the people who ordered the hits, one by one.

“Besides the elation I feel about having a project I wrote actually being filmed, which is huge for any writer, I’m just as thrilled about having Zoe Bell signed on to star in Angel of Death,” said creator/writer Ed Brubaker in a statement to the press. “And working with Crackle and Sony Pictures Television to give viewers instant access to the series online is completely overwhelming.”

You’ll be able to find Angel of Death at www.crackle.com/angelofdeath in 2009.Â  The online movie will be broken into 8-10 chunks spread out over several weeks.