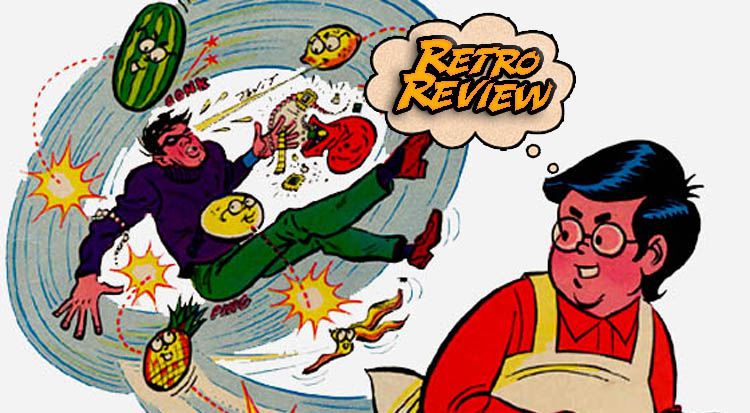 Or – “Fruity IS One Way To Describe It.  Bananas Will Also Suffice…”

Of all the comic books I’ve owned, this one proved among the most difficult to track down.  (I know, you’re probably amazed that I went looking for the thing at all, but I have a penchant for collecting the weird and obscure heroes of small publishers.)  First, it’s easy to get a complete run of a one-issue series, and second, part of the fun of buying old comics is the thrill of the hunt, looking through third-hand bookstores and creepy shops in off-kilter neighborhoods to find that elusive first appearance of Black Goliath.  As for “Fruitman,” apparently it’s a rare and collectible book with a limited print run (as the Ebay prices of thirty bucks and up can attest) and for the apparently large group of Harvey Comics superhero collectors out there, it’s considered one of the jewels of that short-lived line.  Given that most of Harvey’s output consisted of Richie Rich and Casper The Friendly Ghost, what sort of superhero can we expect?  Well, I’ll tell ya one thing, it ain’t normal… Previously in Fruitman: There are many things that confuse me about the Fruitman Special…  Batmania had probably run its course by the time this book came out, and most of the other superheroes that Harvey put out of a far more conventional vein (although to use that term on any superhero put out during the late-60’s glut is probably abusive of its real meaning), so I can’t imagine what might have been going through their minds.  Apparently, Fruitman is a grocer who somehow gained the ability to turn into fruit and fought crime in the back of an Archie-esque title called “Bunny, Queen of The In-Crowd” for 3 years before graduating to this, the only issue of his own title.  I can only presume that someone at Harvey editorial must have thought that the kids of 1969 were clamoring for talking produce with two separate hippie-dippie backups that would embarrass Al Sleet.  Heck, given the illicit substances extant in those days, perhaps they were?

The story starts with a criminal fleeing the police, running past a fruit stand (proof that the story took place in the 60’s, if it were the 80’s they’d have driven straight through it) warning mild-mannered grocer Percival Pineapple that a dangerous criminal is on the loose.  He turns into a lime and rides along on the cop’s hat, then attacks the criminal as a pineapple (spiking him in the nethers), then braining him as a watermelon.  The policeman makes the very meta statement that he’d like to read the adventures of such a hero, and the caption urges us to turn the page to do just that.  I pretty much do anything that comic books tell me to do, so I turn and see (once again) mild-mannered Percival Pineapple standing in his fruit shoppe (the extra ‘e’ makes it classy) when shots ring out, and someone cries for help… That must be great for sales, hmm?  I’ll try that next time I close the Gatekeeper, see what it does for my bottom line.  In any case, with his newly citrusy form, Fruitman quickly overtakes the criminals and shoots juice in the eye of the larger goon.  He then leaps into his pocket (in the form of a tiny blueberry) as the two criminals decide to split up, and head back to their lair.  When the goon arrives back at their criminal headquarters (apparently a cheap motel room), we realize that he’s the muscle, and the other criminal is obviously the brains of the outfit… Outsmarted by a man named Marmaduke?  No wonder Fruitman’s stock has fallen so low in the ensuring 40 years…  Luckily, he’s more resourceful than he looks, creating a makeshift slingshot from an inner tube and two signposts, then pulls it taut, switching to an orange and firing himself through the window.  A quick switch to banana, then a throwing of peel is enough to knock both criminals out, and he calls the authorities. I have to say, this is among the weirdest comics I’ve ever read…  weirder even than Skateman (a Retro Review for another time, I’m sure).  But it gets better, with story two beginning with Percival being accosted by a rude woman in his store, demanding bushels of apples.  He senses something wrong, and tags along with her grocery bag, but is horrified to find that she’s notable criminal Supernasty Miss McShmasty and she’s delivering the fruit to her partner Apples McGee, the criminal who craves apples the way Oprah craves power and souls… These caption boxes are an absolute scream…  How will our hero escape?  Turning into a barely noticeable blueberry, of course.  With a quick switch to lemon and bananas, McGee and McShnasty (or whatever the blue hell her name is) are dispatched just like the previous two thugs.  It seems like he’s in a rut, doesn’t it?  Don’t fret, fair Spoilermaniacs, it gets weirder from here.  How can they have pulled off that one, you ask?  Well, how about Fruitman’s vacation in the tropics?  He can’t afford the trip on a grocer’s salary, mind you, but a quick change to apricot form can take care of that one… Well, that’s not at ALL offensive, is it?  A story like this would only get told in the swingin’ 60’s, I guess.  Unfortunately, though they don’t want to eat apricots, they find Percival himself more palatable, and he has to escape up a handy palm tree and camouflage himself as a coconut to escape.  Are coconuts even fruits?  Anyway, from his new catbird seat, Percival witnesses the chief’s lovely daughter becoming the victim of a kidnapping, or as they called it back in the Dark Ages, a wedding. Lucky that monkey was there.  Where in the heck is Fruitman, anyway?  Palm trees, monkeys, cannibals…  I think they’re on Gilligan’s Island!  In any case, for his act of bravery (if you can consider being thrown heroic), Fruitman is made an object of worship by the natives.  If those natives were colored like any human tribe ever seen, rather than a deep grayish-purple, this could be considered racially insensitive.  In any case, the lovely daughter’s worship is almost enough to make him happy…  ALMOST. That’s… just wrong.  I’m so glad that he can’t turn into articles of clothing, or this’d be just plain gross.  That’s the end of Fruitman for now, but we’re given the adventures of another equally bizarre superhero, Stanley Humbert, who transforms from a plain, ordinary hippie into Sooper-Hippie!  He’s… um…  not so very fascinating, actually, more like a series of repetitions of the same joke (and bear in mind, he’s backing up FRUITMAN), culminating in this panel…

Yeeeah.  Because chicks dig the ill-kept, odoriferous, flares-and-sandals type, especially when they tie a blanket around their neck.  That’s a total chick-magnet, there, right up with a sleeveless sweater-vest, or recapping comic books for a living.  Also of note, the fact that Sooper-Hippie is “allergic to grass,” a line that may or may not be a sly drug reference, but in any case casts aspersions on Humbert’s true Hippie credentials.  In any case, Sooper-Hippie is consistently drawn, and at least one or two of the jokes hit their mark, which is a step and a half above the third feature in the book (appearing after another Fruitman short, in which he turns into a grape and undermines a scheme to bootleg French wine), the mighty Captain Flower! That’s the only panel that I can make head or tails of in the entire story, suffice to say that Captain Flower loses his bid to stop the evil ‘Lectric Man, and that I suspect that if the writers weren’t on some sort of illicit substance, they presumed that the readers WOULD be.  In any case, it’s the weakest of the stories in the book, and comparatively makes the Fruitman stories seem like Watchmen.  All in all, it’s a pretty fun comic, though one I’m glad I found in a lower-grade (and price point).  It’s certainly one of the most… unique… takes on the superhero genre, and the bulk of the art (mostly by legend Ernie Colon) is well-done.  The cleverness of the ‘transforming into fruit’ motif is undermined by the repeated use of the same gags (lemon-juice-in-the-eye, banana-peel-on-the-floor) but overall it’s a cute book, with one fair-to-middling (if somewhat addled) backup and another amateurish (but very ’60’s) in execution.

In a way, this is close cousin of the underground comics revolution, and I suddenly wonder if that wasn’t it’s intent.  Though the timing is too late for a ‘campy Batman’ tie-in, it’s nearly perfect to cash in on the sudden success of ‘Zap Comix’ and ‘The Fabulous Furry Freak Brothers’, making me want to dig out my copies of those issues (I think I have 22nd printings or something).  With that sudden realization, I jump from looking at this book as a not terribly successful superhero parody to a kinda-sorta-subversive look at the superhero, possibly as an icon of the status quo.  I don’t know why that makes a difference, but it does, pushing Fruitman Special #1 to 3 out of 5 stars overall, with the caveat that these are 1969 stars, and the exchange rate may not be exact, what with inflation and all.