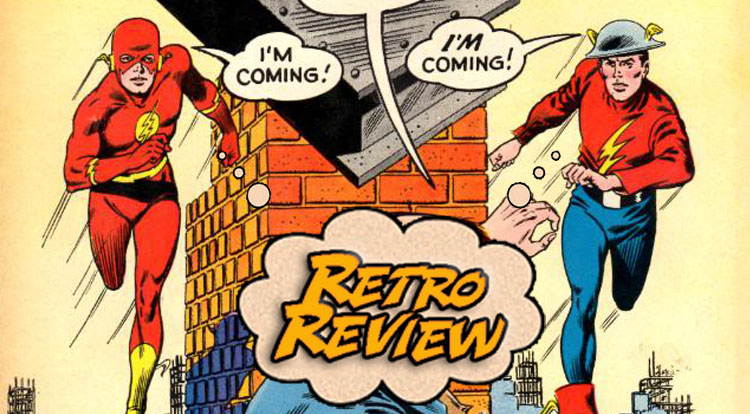 There are those who find the Silver Age of comics ridiculous, and the situations laughable.  They cite simpler art, weird stories, and a general lack of realism as sticking points, whereas I cite them as the main selling points.  In those days, the language of comics was still in it’s formative years (after all, the time difference between the debut of Superman and the debut of Barry Allen as the new Flash was a mere 15 years), and every story essentially came from whole cloth.  And nowhere is this more true than this issue, one of the first comics to exercise what today we call “continuity,” attempting to stitch together two divergent stories into one, and as a side-effect, creating the multiverse.  You’ve heard of the multiverse, haven’t you?  Watch, my friends, and learn. Previously in The Flash: Barry Allen had, at the point this issue came out, been around approximately 6 years (this title picked up the numbering from the Golden Age Flash’s book with #105, and he’d had a run in “Showcase” prior to that), and though there was no such thing as fandom, no Wizard, no Overstreet, no Wikipedia to keep the old characters visible, there were those who remembered Jay Garrick’s run (no pun intended) as the hubcap-hatted Flash of old.  In fact, Barry Allen’s origin had him reading the comic book adventures of Jay as The Flash, clearly NOT a real character in his world, and taking his name and motif in honor of him.  It’s interesting to me that a grown man reading comics didn’t seem to be that big a deal in 1954, but that issue (and this one) was created by men who were science fiction fans, writers, and were part of the nascent sci-fi fandom.  So, given that one of the characters on that cover has been established in a previous issue as NOT EXISTING, we’re probably going to see a retcon, or a blatant glossing-over of the facts of that previous issue, as though it didn’t happen, right? Nope.  Gardner Fox is going to give us an explanation, by Zeus, and it’s going to be coherent and possibly even scientifically plausible.  As an aside, I really do miss the splash page, a little something to set us up for what’s coming, and maybe even explain what’s going on before we get the show on the road.  Our story begins in Central City’s Community Center, where Barry Allen has come to support his girl, Iris.  Turns out the magician Iris hired to entertain a group of orphans pulled a no-show, but Barry has an answer:  he’ll just ask his “old friend” The Flash to step in.  One quick-change later, Flash pulls a number of high-velocity magic tricks (including a game of tennis with himself), before trying the most amazing trick of them all… At first, it looks like another trick, but something else is up…  Barry suddenly finds himself on a darkened road, in the middle of nowhere.  He suspects that he vibrated so fast that he teleported through some sort of space-warp, but as he races back to the city, he notices that several of the landmarks that he expects to see are missing.  Barry hopes that he hasn’t thrown himself back in time to before those structures were built (a very shrewd thought on his part), but instead finds something even more unnerving. Curioser and curioser, Mr. Allen thinks, as he checks the newspaper for the current date.  It’s no time warp…  He suddenly remembers something from his past, and his lightning-fast brain starts putting pieces together.  “Could it be that…  what I’m thinking…  “HE” used to live there!”  Checking the phonebook, the Scarlet Speedster finds what he’s looking for, racing across the city to an address he remembers from his childhood… He goes on to recount an accident that left young Garrick flat on his face, breathing experimental “hard water” fumes all night, waking the next morning to find himself the fastest man alive!  Jay is stunned that this complete stranger just told him his own life story, right down to the details that only HE should have known, until Barry drops the bomb:  He, too, is The Flash, but the Flash of an alternate Earth!  With this casual conversation, the entire DC Universe changed forever, no joke.  But right now, it’s just two men mulling over their strange situation.  Barry recounts his own origins (struck by lightning that forked through a rack of chemicals), while Jay mentions a string of strange robberies that have tempted him to come out of retirement.  The first involved money simply flying off into the air, while the others… And, on the third page following (I love the little hands on the caption boxes, too, a trademark of artist Carmine Infantino, and a recurring Flash theme), we finally see what caused those strange robberies, the ones that seemed like you’d need mind-over-matter powers, control of darkness, and some sort of mystical musical powers. Turns out that it was villains with mind-over-matter powers, control of darkness, and some sort of mystical musical powers,  all recently released from jail.  The expository dialogue feels very clever and simple, and though it feels awkward, it’s awkward in a very nostalgic and awesome way.  The two wing-heads split up, to try and track down the source of the robberies, and Jay hits paydirt first, catching the Thinker in the midst of stealing the Neptune Cup.  Using telepathic coersion, Thinker influences the owner of the cup to just hand it over, but The Flash arrives just in the nick.  He tries to nab the Thinker, but the villain seems to teleport, and Jay starts racing after him, only to have it happen again, and again, and again, until he’s nearly exhausted. The years of inactivity have not been nice to Jay (it has been over a decade without this sort of exertion for him,) but sadly, his successor to the name isn’t doing much better.  Barry has encountered a strange black cloud at the waterfront, which, unbeknownst to him, is covering another theft by The Shade.  Barry disperses the darkness with a speed funnel, and runs on water to catch the fleeing Shade, but gets outsmarted in short order… I just love the visual of the Fiddle Car.  It’s so goofy that it becomes genius, then returns to goofy again.  In a moment that should be stapled to the insides of Joe Quesada’s eyeballs, the moment shown on the cover IS PART OF THE STORY (not to mention being an attractive layout that gives you some idea what is inside the book in question, keeping you from buying a comic multiple times because you can’t tell the stupid covers apart and the issue number is a two point font), and the two Flashes are distracted long enough for the Fiddler to make his escape.  He’s a genius, right up until the point where he parks his Fiddle Car in a very visible driveway, allowing both Flashes to just walk up and attack.  He uses his super Fiddle to make them dance for his pleasure, then instructing them to do his bidding and pick up the jewels that he just heisted, knocked to the floor in their attack.  He then orders them to freeze for 24 hours so that he and his compatriots can escape.  Both Flashes stop moving…   then suddenly burst into action, faster than thought, and capture all three malefactors in seconds.  How, you ask? That’s absolutely brilliant.  Jay doesn’t realize, when he figures out how to cross back and forth from watching Barry, that they’ve just begun something that will last for a quarter century, with both his old Justice Society friends and Barry’s Justice League pals all getting involved, leading up until the Crisis itself in 1986.  In a bizarre moment, Barry ends the issue by thinking he should look up Gardner Fox (who wrote many of the old Flash’s stories, as well as the one we’ve been reading) and let him write up this adventure in a comic book (which is later the basis for the existence of Earth-Prime, ostensibly OUR Earth, and the eventual rampage of the Earth-Prime Superboy).

It’s exhilarating to watch the ideas flying in this issue, and absolutely daunting to realize how much of the next three decades springs directly from this issue and the chance meeting of Flashes.  “Flash of Two Worlds” is one of those stories that changed the industry, years before Dark Knight or Watchmen, and it lives up to the hype.  The rules of comics are being written before our very eyes, and it’s entertaining as hell.  Flash #123 though nearly five decades old, earns itself 4 out of 5 stars.