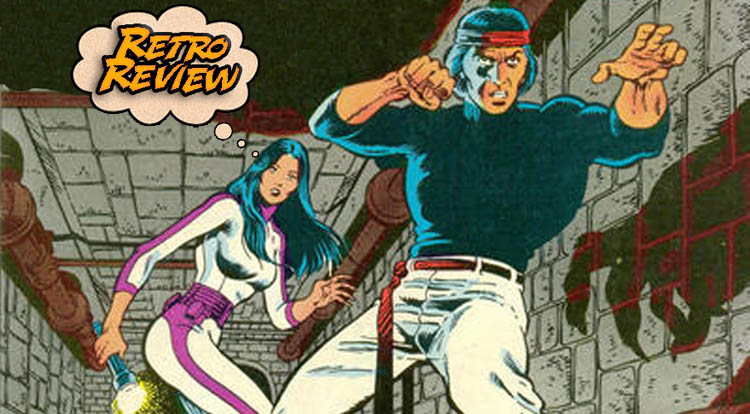 By Matthew Peterson on February 4, 2007 0 Comments

Or – “The Thin Line Between High Concept and Dumb Idea.”

Yesterday was the first Saturday of the month, what we at Gatekeeper Hobbies (Gage & Huntoon, Topeka, KS, tell ’em Matthew sent ya!) call “Buying Day.” Padding out the bottom of a box of comics we MEANT to buy was a very dog-eared copy of Master Of Kung Fu, circa 1980, that was bound for one of two places: The Quarter Bin, or my collection. Since the two are generally synonymous (and since I remember this book from my youth), I thought we might all enjoy it together, and we just might learn a little something before it’s done… Previously in Master Of Kung-Fu:  “Call me Shang-Chi, as my father did, when he raised me in the vacuum of his Honan, China, retreat. Since then, I have learned that my father is Doctor Fu Manchu, the most insidiously evil man on Earth… and that to honor him would bring nothing but dishonor to the spirt of my name.”

That, my friends, pretty much tells you all you need to know, really. Born of a strange creative synergy (when Marvel simultaneously acquired the rights to Sax Rohmer’s evil “Yellow Peril” villain Dr. Fu Manchu AND to the television show “Kung Fu”), Shang managed to outlive his rather strange family tree and the martial arts craze that spawned him. In issue previous to this, Shang had hooked up with MI-6, British Intelligence, and engaged in various and sundry spy games he referred to as the “games of deceit and death.” In the hopes of regaining his perspective and serenity, Shang has left MI-6 and walks the earth, having adventures…

Unfortunately, serenity (as always) eludes Mr. Chi, as he has found that the gangs of Chinatown are involved in an ongoing race war, filling the gutters of New York with blood. Last issue, Shang fought a street gang called the Joy Boys, a mostly Chinese coalition of toughs and ruffians who were so impressed with his skillz that they invite him back to their lair to make him an offer he shouldn’t refuse. That panel is intentionally clipped oddly, by the way. I may not always get ’em straight, but I can usually keep it rhomboid… Shang agrees to take the lead, in the hopes that he can drag the group of teenagers away from the path of violence. Unfortunately, they already have a rumble scheduled with the Golden Claws, and they want Shang to lead three of their gunmen to take out some Claws now. Shang manages to get his guys into the gun shop without incident (his kung-fu keeping them from getting killed), but the FORMER leader of his gang sicced the cops on them. Shang goes peacefully, but the police are either racist, or corrupt, or both.

Oh, the 70’s, age of enlightenment… For my part, if I were a cop, I’d be a little bit suspicious of a guy walking the streets wearing nothing but silk jammies and a headband as well. After a day in jail, Shang is busted out (his former spymasters being owed a favor or two by the local police, and manages to show up just in time to speechify before the Chinese and Japanese gangs kill each other over nothing at all. Chen, the Joy boy who turned Shang in, takes a swing at his lady Leiko Wu, but you don’t date the Master of Kung-Fu without picking up a trick or two. Her defense sparks a riot…

Oh, no, not Tommy Lee! Damn you, Hep B! No, wait… Tommy Lee is the recently dead ganglord. Both groups clash, and Shang and Leiko try to keep anyone from getting killed. Chen once again rears his porn-star moustache, sending one of his fellows to shoot the leader of the Golden Claws. When the boys’ bravado fades, Chen himself steps in, taking a shot at his “enemy…” but only managing to clip someone he won’t believe is a friend. All the gang members stop at the sound of the gunshot, allowing Shang to again entreat them to stop, to finally give up on violence, even just for a moment… His words strike home (apparently he needed to be bleeding severely to get his point across) and both gangs walk away, leaving only Chen to rail in the night, to try and fan the flames of hate again. Shang and Leiko stagger away to the hospital, as our hero muses, “the trap is too stubborn to permit a full escape. The hate will continue. I can hope for nothing more than what has been accomplished this night. Life, at least, goes on…” While not writer Doug Moench’s best work on MoKF, this issue at least stands up to scrutiny after 27 years. It’s not up to the standards of today’s comic plots, but in some ways that works in it’s favor. The story reminds me a little bit of “The Warriors,” with a bit of psychological claptrap dialogue to give it depth. Shang-Chi is one of those characters who has danced along the fringes of the Marvel Universe, but a story like this could have taken place in a world without any superheroes at all. You can almost imagine it as an Afterschool Special, or a very special episode of something guest-starring Clint Howard.

This issue also had a few things I never remember are missing from today’s comics until I read an old one: newsprint pages, for one. Yellowed, brittle pages, with pencilled in moustaches on some of the characters. You have to love the way kids treated their comic books, back in the day. We get ads for Chattery Teeth, for X-Ray specs, for Bubble Yum and Grit. It also has an honest-to-Peter-Parker letters page, something I do miss in most of my comics these days. Interestingly, the book uses no thought balloons, instead utilizing the currently in-vogue trick of showing the main characters inner turmoil through captions, proving the book far ahead of it’s time. But the real wave of nostalgia came from the way the book smelled, that weird decomposing newsprint smell that old comics get. I have to say I miss that most of all, more than the pocket telescopes, the ads for Hulk utility belts (HULK utility belts? He barely wore pants, much less a utility belt!), even more than I miss the Mighty Marvel Checklist.

The art of a young Mike Zeck and an in-his-prime Gene Day is excellent, giving Shang a unique face with just a touch of Bruce Lee. Moench’s script strives for relevance (though three decades down the line, it’s hard to gauge how relevant it might have been), and gives the character an interesting paradox, forced to use violence to try and stop more violence. The gang war storyline, while a little dated, is still accessible in this day and age, which is more than I can say for some issues of X-Men from the same period. It’s not perfect, but it was interesting and well-drawn to the tune of 3 stars.