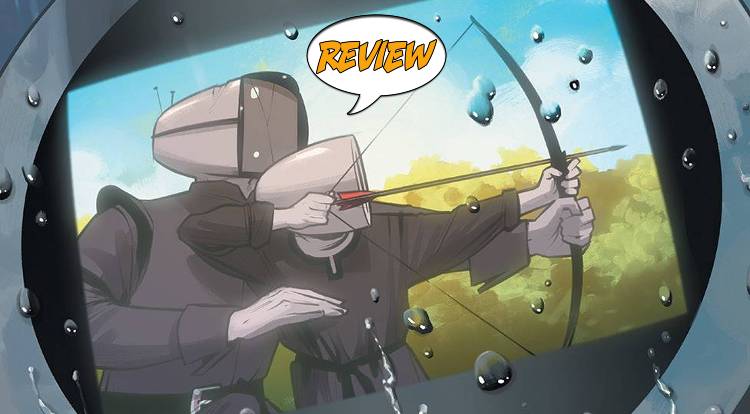 Alana and her family are still on the run, but there’s a pirate ship on the horizon that may spell their salvation… or doom? Your Major Spoilers review of Saga #56 from Image Comics awaits!

Previously in Saga: Back in 2019, Saga ended with a shock, as both Prince Robot IV and Marko were killed by bounty hunter/mercenary The Will. It’s been three years since their demise, leaving Marko’s daughter Hazel, Robot’s son Squire, and winged mom Alana on the run, selling goods legally and not-so-much-so as they make their way through the worlds in search of a better life.

WATCH OUT FOR THE VIRTUOUS

As the last issue ended, the Wooden Treehouse that serves as the home and spacecraft of our motley group of protagonists was overtaken and captured by space pirates. Once they’re aboard, though, it seems that the pirates aren’t as nefarious as they seem, as their captain breaks out ice cream for the kids and starts discussing business opportunities with Alana. After last issue’s gruesome reveal that The Will has taken Marko’s skull back to Wreath, we find that Prince Robot has likewise had his desiccated skull/TV set returned to his father. King Robot is devastated, instructing Countess Robot X to find and kill the man who murdered his son. She almost talks him out of it before someone arrives claiming to know who the killer is. Back on the pirate ship, Alana and the Skipper discuss her stash of the drug, Fadeaway, putting together a plan to sell her wares, benefit them both, and even get her the medallion she needs to legally sell her OTHER stash.

The end of Saga #56 is horrifying on a number of levels, not just for the unspeakable threats that Skipper makes, but the sense of impending doom that the story engenders. Saga has always been the story of desperate people doing horrifying things, but every once in a while, we get a reminder of just how screwed up the world is. That said, it’s still as complex and morally confusing as ever, with this issue continuing to build on the series’ return and the new status quo after the time jump. The good part is Narrator Hazel saying that her time on the pirate ship was some of the most memorable and happy bits of her youth, so hopefully Skipper is just spitting empty threats. Staples’ art is lush and dramatic throughout the story, making the interior of the pirate ship look AMAZING, especially the part that’s basically a space record store. Hazel’s expression of excitement when she learns about guitars is a stand-out, but it’s Alana’s visceral response to Skipper threatening her children that really steals the show.

BOTTOM LINE: BACK WITH A SPLASH

It had been so long since Saga went on hiatus that I had forgotten how good this book could be, but Saga #56 reminded me in the best way possible, combining utterly beautiful art and compelling story into a fine hunk of comics reading, earning 4.5 out of 5 stars overall. I’ll warn readers of a sensitive nature that this book has a Mature Readers tag for very good reasons, but I found it well worth the discomfort to read a book this well-crafted.