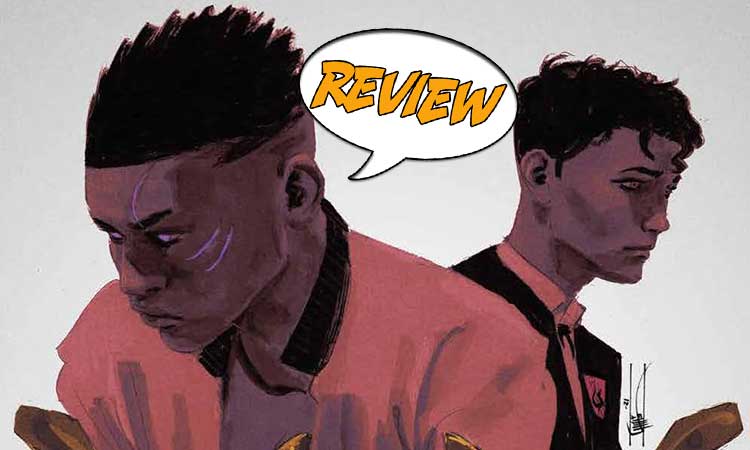 Previously in House of Slaughter: As young men, Aaron and Jace meet at the House of Slaughter and fall in love. Jessica finds out and pulls Aaron aside, lecturing him. Monster hunters must suppress their emotions in order to hunt their prey. In the present day, Aaron has found Jace and declared he is there to kill him. Jace will not take up weapons against Aaron. What is behind all of this? Jace comes from a family of Legacy monster hunters at La Maison du Boucher in New Orleans. His family was killed by hunters from the House of Slaughter. He planned his revenge against the Dragon but did not want Aaron to be caught up in the carnage. But now he faces the consequences!

A PARALLEL OF HUNT AND REVENGE

Again, there are interweaving timeframes in House of Slaughter #5. Considering that even the older Aaron is still fairly young, it sometimes takes a moment to orient yourself, but it all comes together, and the payoff is wonderful. Jace has something to show Aaron deeper in the woods. As he follows, Aaron remembers that day in the past when Jace planned his attack. He also provides a background thread of narration talking about being a hunter, setting traps, and luring in the prey. And there are obvious parallels between Aaron hunting Jace, and Jace stalking the Dragon.

But what Jace has here is a surprise. He and Aaron reach the crest of a hill above a clearing where a loose camp is set up, a camp full of kids. Jace has an unexpected future to share with Aaron.

In the past, Jace succeeds in his hunt and is invited to see the Dragon in person. The Dragon congratulates him. Jace looks him in the eye and declares he is smaller than he expected. The Dragon remarks on how he has grown. Such calm words with such pointedness behind them! The Dragon asks if Jace is loyal to the cause of killing monsters. Jace says that he is, and he pulls out a totem, but not one we have seen him with. His family is dead, but their totems survive. What will happen if he lets the inner monsters loose?

This is Jace’s plan for destroying the House of Slaughter. Aaron does not know this, but he knows that something terrible is going to happen. He runs through the house looking for Jace and sees monsters on the loose.

In the present, we learn that Jace’s camp grew organically as he saved children from monsters. Aaron declares they are a threat to the Order because of their knowledge of monsters. Jace knows quite well that Slaughter has not spared any children since Erica, but his mission is to save the children he can and give them a place to recover and to regain their childhood. Aaron wonders why Jace is showing him this, since he knows this is a threat to them, and Jace says he hopes Aaron will join them.

Back in the past, the fight continues. Jace is confident in his knowledge that Slaughter killed his people. The Dragon accuses his family of having split up and destroyed the Maison du Boucher, and Slaughter was there to save it. Meanwhile, Cecilia is attacked by a monster she recognizes is untethered. Helen, who steps up to attack it, is killed instantly. Jace gets the Dragon down as Aaron arrives and attacks Jace. Their fight tumbles out into the hall and ends up with Jace cutting off a couple of Aaron’s fingers. He could not help but pull back; he did not want to kill Aaron. He runs off.

So that is why Aaron is hunting him after all these years, but Jace’s offer is unexpected. Aaron wants to join him, but recognizes how much more danger they will all be in. The House of Slaughter will have two people to hunt.

But remember, Aaron has been talking about hunting and setting traps. This arc has a marvelous ending that pays off well.

The art of House of Slaughter #5 is highly focused on the characters. Most of the backgrounds are simple with just enough detail to inform us of time and place. And it is enough. While I expected Jace to confront the Dragon, I was not expecting him to use all his family’s totems to cause that much disruption. Jace is a hunter and a fighter, and he is good at it. We see the focus that he has in his refusal to listen to what the Dragon tells him. What is truly wonderful is also seeing him in his present life, where he has taken that focus and dedication and put it to work righting a wrong by helping the children devastated by monsters. In this grim part of the world, there is a spark of hope. Perhaps love is not the weakness that the leaders claim.

The fight scenes are short and brutal. I think the book relies on our past knowledge of the monsters, so we understand the havoc they cause in a few short panels. Having the retethering ceremony earlier on also sets us up for this. As always, I really like the otherworldliness that the monsters have. Their malevolence is palpable and their capability for destruction is immense.

BOTTOM LINE: A DARING ENDING IN A DANGEROUS WORLD

House of Slaughter #5 is a glorious finale to a story that doesn’t just allow us to get to know Aaron better. We come away with an understanding of the traditions of the House of Slaughter with their good intentions and their sometimes traumatizing outcomes. This is also a story about surviving trauma and how for some survivors, there may be something akin to hope.

To be a successful hunter, one must be more clever than the prey could imagine.