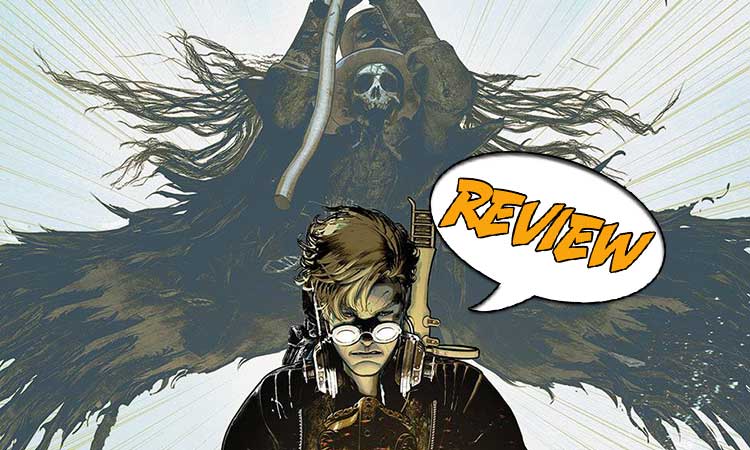 As Taj covers for Virgil on Earth, he explores Hell further. Has he gotten tangled up in something even bigger than his partner’s death? Find out in Hellcop #4 from Image Comics!

Previously in Hellcop: Virgil and the Senator travel through Hell with a couple of denizens from Clan Tepan. They assure him that they can guide him to the place he’s looking for. Back on Earth, Taj tries to buy him some time, but her boss brings in a tech by the name of Wil Brode who rudely takes over. She sneaks away with a vital processor and flushes it down a toilet. Without the processor, the team sent in to find Virgil instead finds themselves stranded in an area from which they can’t port home. The Tepans claim to have brought Virgil to what he was looking for, but he recognizes that instead, they brought him to the River Lethe to wipe his memory.

Hellcop #4 opens with Virgil dreaming about Karen until he is woken by a funny slurping noise. Last issue he was rescued by Briggs, a former Hellcop. Briggs has a pet three-headed puppy named Edgar. The Senator has filled Briggs in on what has been happening. Briggs thinks that by framing him for his partner’s death, someone really wants Virgil out of their way, even if he has no idea what is going on.

The Senator sees some scarab pins similar to the one Virgil brought back to Earth. It’s also the kind that the Senator’s doppelganger was wearing. Briggs tells him they are basically soul jars. If the one Virgil had was active, he could have been replaced by another soul. But that is a digression as Briggs fills Virgil in on a little history. He was one of the first people on a mission to this destination, the first dimension that was not just a virtually empty pocket dimension. He idealistically thought they were there to be explorers. Instead, they were invaders, killing the denizens and taking natural resources. And the inhabitants could not get through to Earth to retaliate.

At Hellcop Central, Wil continues to work on the code for the portal to try to fix it. He calls Taj “Honey,” and tells her to bring him some coffee. She takes advantage of this to slip him a handful of laxatives.

Briggs shows Virgil an operation where parademons outfitted with restriction collars are being used as slave labor to load transport units with gold and heavy metals. Someone is making a killing. Briggs also notes the glowing ball that has been hanging around helping Virgil out. Briggs tells him it is a human soul, and he knows a charm that might reveal who it is. It is Rachel. They have a touching meeting and Virgil thinks he can bring her back by way of a scarab. She refuses; she knows she must move on, and he must let her go.

While Wil is out of commission, Taj does a little exploring. She decides to trace the largest of the power conduits. It leads further down beneath the portal room. She then finds a huge bank of cooling pipes. And ultimately, she finds an enormous portal, obviously being kept secret.

ANOTHER ANGLE ON A STRANGE DIMENSION

I like that in the art of Hellcop #4, the creators are not afraid to have a little fun. Edgar the three-headed puppy is adorable. The three heads are individual, but they’re all puppies who are determined to be cute. Briggs continues the interesting character design. He may be human, but he has left the Hellcops and lives here instead of on Earth. He has a weapon that is made from the fused spine and skull of a horned creature, which is thematically utterly appropriate for the setting. He makes another wonderful contrast to the Senator, whose suit continues to be spotlessly white.

I like the sequence showing Briggs’ backstory. He was an explorer in the 1980s, and when he arrived in the Hell dimension, the team was dressed in outfits that resemble the suits worn by astronauts. It subverts our expectations to see them pull out weapons akin to flamethrowers to kill the approaching indigenous creatures. It puts a whole new and interesting perspective on the story.

Hellcop #4 is a mystery that continues to get deeper. Not everything is what it seems, and sometimes things get even more complicated than that.

Virgil meets one of the original Hellcops and finds out some of the dimension’s history.