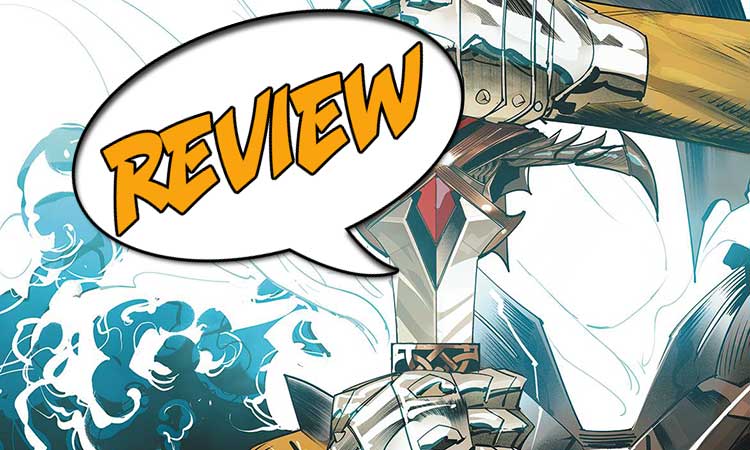 Once and Future #24 Review

Arthur has returned to Britain, not once but twice. A civil war between them could be devastating, but what story character is powerful enough to confront them? Find out in Once and Future #24 from BOOM! Studios.

Previously in Once and Future: Bridgette, Duncan, and Rose are trapped in Shakespeare’s Armoury in Stratford-Upon-Avon while Elaine is just outside with a gun. Near the Grail Castle, Jack leads a cow to the Faeries for trade and receives some seeds in exchange. When he drops them and they immediately start to grow, he realizes that he is in the story of Jack and the Beanstalk. Undead centaur Galahad wants to fight beside the Romantic Lancelot. His counterpart Galahad arrives and wants to hunt him. Elaine and Bridgette come to an agreement regarding access to the Armoury. Bridgette takes Duncan and rose to Leicester to talk to an old sea god who was trapped by one of Shakespeare’s own stories – Leir, also known as Lear!

As Once and Future #24 opens, the undead Arthur is in Avon, east of Bath where he plans to make his stand. He does not remember the name of the place, but Merlin does. The place is Badon, where, in the fifth century, Arthur fell. Merlin, knowing and understanding how stories work, begs him not to fight here. But Arthur insists and Merlin must follow.

In Leicester, Leir begs to be set free. He swears he wants revenge, but as Bridgette lets him speak, it becomes apparent that he is still far more Lear than Leir. Bridgette makes some snarky comments about Shakespeare that only serve to anger him more. Is this deliberate on her part and is she plotting something? The question is answered a few pages later. Setting free an angry Leir may interfere with Arthur’s story.

Arthur and Arthur meet in battle. These sequences with double versions of characters are so clear with the illustrations and so challenging to describe in words alone, but they are equally matched, and the Romantic Arthur demands Lancelot. His Lancelot has been busy taking down the centaur Lancelot and mocking him.

The Romantic Arthur gains the upper hand in the fight, but Undead Arthur is not that easy to kill. Merlin, adamant that his Arthur does not die here, searches his memory, then calls out to Arthur, alerting him that Guinevere has cheated on him.

Bridgette has another plan. She left the Armoury with a quill pen of Shakespeare’s, but this is no common pen. It leads them to a woods near Nottingham, and ultimately to an arrow that it once was part of. Bridgette warns Duncan and Rose that they need to be ready to run, and she pulls the arrow free. Arrows immediately come flying at them. Robin Hood is the protector of the forest, and Bridgette has an idea of how to enlist his help.

Once and Future #24 features a fight between the Arthurs. Neither of them looks very much like the Arthur Merlin remembered at Badon. One, of course, is the undead Arthur we have followed from the beginning. He has armor and a spiky helmet, all in dark colors. His opponent looks very different. His armor is mostly white with some red accents. It covers his body so sleekly that it almost looks futuristic. When they first charge at each other, we are struck by their symmetry. They even say the same things at times. It sets up how they so closely matched in strength.

I love the search for Robin Hood. While I don’t know that arrow fletching could be repurposed as a pen, it could certainly be incorporated into one. Bridgette ties it to a string and lets it hang freely to point the way. In the woods, the coloring takes one’s breath away yet again. The sky is a pale gold and the woods dark, as though sunset is fast approaching. This sets up a few lovely silhouettes and use of light to draw our eyes. When Bridgette pulls the arrow free, suddenly everything changes. The dark purple withdraws from the forest to become the background color and the woods become a deep, vivid green. It adds a wonderful atmosphere to the scene.

Bridgette tears through Once and Future #24 setting characters from other stories free. We have been eased into this concept, and the payoff is delightful. The Arthurian story takes another hard twist just when we thought we had some idea of where it was going. It’s a gripping read that makes me eager to see what happens next.

The two Arthurs meet in battle and Bridgette searches for new and dangerous allies.