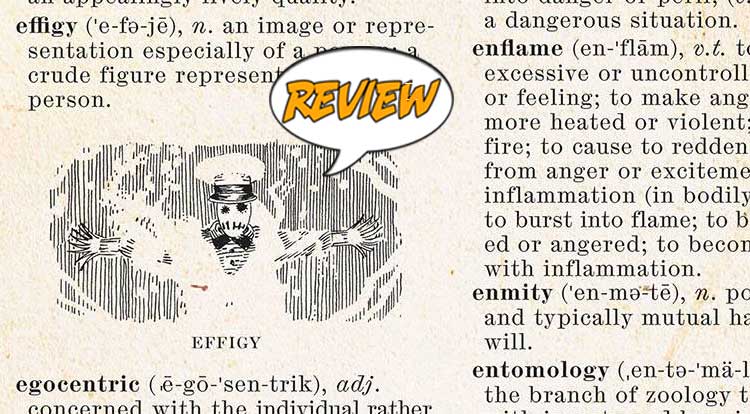 Review: (noun) – A critical appraisal of a play, movie, exhibition, or perhaps even a comic book! It’s time to trace some etymology. Your Major Spoilers review of Ice Cream Man #28 from Image Comics awaits!

Previously in Ice Cream Man: The term “comic book” is an etymologically confusing one, as they (the comics) are most often not humorous, nor are they in the traditional sense books.

And this one is downright diabolical.

EMBELLISHED TO SUIT THE NARRATIVE

Ice Cream Man #28 begins at the base of a mountain. It may be in Tibet, or K’un-Lun, or perhaps the Tower of Babel itself, but regardless, an etymologist named Gartner has come to find a monk who sits on the top of the mountain. It is said that he knows the source, the VERY FIRST WORD, the one that can cure disease, destroy a city, and perhaps finally answer the questions that have plagued him all his life. His guide, Sam, has hired a local to help them up, a man who speaks a particular local dialect. As they journey, Sam wonders what Gartner wants from the wizard at the top, only to be told that “wizard” is just a corruption of “wise” and that knowledge is its own form of magic. Their travels are dangerous (regular readers will be in no way surprised to hear of the giant spider that tries to kill them), leading to Sam’s horrific demise. The Dragoman reveals that he DOES speak English but that it’s far too imprecise, leaving Gartner to mount the final leg all by himself, to the top of the peak where he finds… Riccardus, The Ice Cream Man.

“BUT WORDS ARE BUGS”

The last few pages of the issue seem to be hinting at the end of the book, though it’s not clear whether or not that’s something we should expect any time soon. Either way, Gartner’s fate is the same as most Ice Cream Man protagonists, while the wizard/monk/Ice Cream Man speaks of a trial that is to come. As with previous issues (like the anagram issue or the crossword clues edition), this story has what you might term a gimmick in Gartner’s love of words and their origins. But even if you think of it in those terms, it’s a really good one, playing with form and function of words. The art is likewise inventive, as Gartner dreams of a representational world where water is drawn as the WORD water, and he finds the answers that he seeks at the foot of a tree made of the letters t-r-e-e. The usual horrors are also on display, with Sam’s demise serving as a rare example of the jump-scare in sequential art, much harder than when it’s done on film.

In short, Ice Cream Man #28 is once again a fine example of the synthesis at the heart of comics, with words and pictures working together, then swapping jobs, then coming back together as something entirely new, with a mean-spirited ending befitting a book this dark and several moments that stick with me long after my first read, earning a well-deserved 5 out of 5 stars overall. Prince, Morazzo, and company have quietly made this book the best, most consistently excellent series in recent memory, and if you consider yourself a fan of the comic art form, you owe it to yourself to check this one out.

This issue plays with meaning and form, hinting at what is to come and perhaps even showing us how the book will end, all the while making fascinating hash of words and pictures. It's a fine comic reading experience.