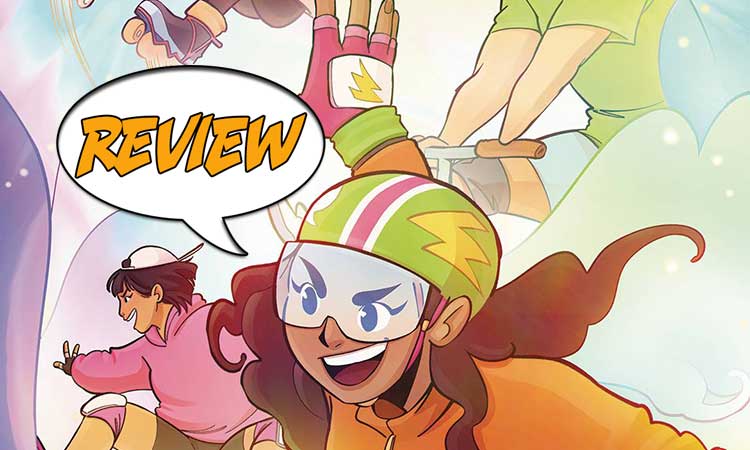 Dizzy has always wanted to be someone special and now she finally has her chance. But why does being a hero seem to be getting harder instead of easier? Find out in Getting Dizzy #3 from BOOM! Studios.

Previously in Getting Dizzy: Dizzy is the Burb Defender and has magical skating gear! Unfortunately, she is still clumsy. She loves to skate but is not as good in real life as she is in her imagination. The other young skaters she has met are seriously good. But she doesn’t feel she’s really their friend yet, and she doesn’t think she can tell them about her mission. She does decide to compete in a local skate competition. Then one of her new friends, Scarlett, is strangely rude. Dizzy spots a Negatrix on her back and the chase is on! After it gets away, she does decide to tell Payton and Av and they help her come up with a plan to help Scarlett. Now Dizzy has a tough choice – is she the Chosen One, or does she have a team?

ONE STEP FORWARD AND TWO STEPS BACK

As Getting Dizzy #3 opens, Dizzy is cleaning her skates before the competition. She is not too confident in herself as the Burb Defender. Scarlett is part of the group again and even designs uniforms for them. Av programs an app to detect Negatrix activity. Payton starts planning strategies they can use. Dizzy feels like she isn’t contributing.

They go past City Hall, where Dizzy sees Julio as he’s talking to the Mayor on the phone. The Mayor directs him to use City Hall for his campaign. Even though it is against the law, the Mayor insists. Julio recognizes her and wishes her well at the competition, and that puts Dizzy back in a good mood. Her confidence returns and is in full swing by the next day.

The morning of the competition dawns and when Dizzy arrives at the skate park, she finds several disappointed skaters. The Mayor has outlawed all wheeled sports and activities in town. Payton suspects Negatrixes may be involved. The team asks Dizzy what to do, and all she can come up with is to start a petition. Skipper wonders if Bea ever had to deal with a skate ban and says out loud that Bea always knew what to do. Dizzy takes this personally and reminds her that she is now the Burb Defender, after all. Skipper tells her that all she wants is to find Bea, or find out what happened to her, but it comes out that whoever found the portal would have become the Burb Defender.

Dizzy realizes she is not the Chosen One. Even though Skipper tries to tell her that her choice of whether or not to keep the powers is more important than somehow being picked by destiny, Dizzy lashes out at her and calls her a loser. When her friends say that wasn’t cool, she tells them she’s not their friend and takes off.

She happens to go past the Mayor’s rally where he is talking about enacting new laws to prevent anyone who is different or mess or dangerous from living in town. This catches her attention, and she puts on her visor. The Mayor has a Negatrix. Not only that, but many of the people in the crowd have Negatrixes on them. Even as she recognizes that she is the Burb Defender, and she has to do something, she is overcome by doubt. She scans herself with the visor and discovers that she, too, has a Negatrix!

Dealing with self-doubt is a main theme in Getting Dizzy #3 and what brings it to life is personifying the doubt by using Negatrixes. We get a hint early on that Dizzy may be dealing with one of them; when she picks a fight with her friends, one panel shows some dark tendrils surrounding her. I do like the concept of them being present but invisible to most people. I also like how they look, dark gray creatures with oodles of pointy teeth, grippy claws, and fiendish grins. And the people they cling to are completely oblivious.

Dizzy goes through some major emotional swings in this issue. I like the range that we see in her. Her exuberance has been toned down somewhat ever since she realized that she still has work to do to be a hero. Her low points have been gradually getting lower, thanks to that Negatrix, and that comes across clearly. Every time her confidence takes a hit, she sinks even lower. Even though we know that Dizzy has been fighting back all her life, we can see how much harder that is getting for her. Real life has some serious stakes for her.

Getting Dizzy #3 is very relatable. I like the vehicle of the Negatrixes to give form to the formless monsters of doubt that plague us all, and how this takes an inner battle we all struggle with and makes it an exciting fight against a more tangible kind of enemy.

The Negatrixes continue to cause problems, but this time they head for the top – the Mayor!