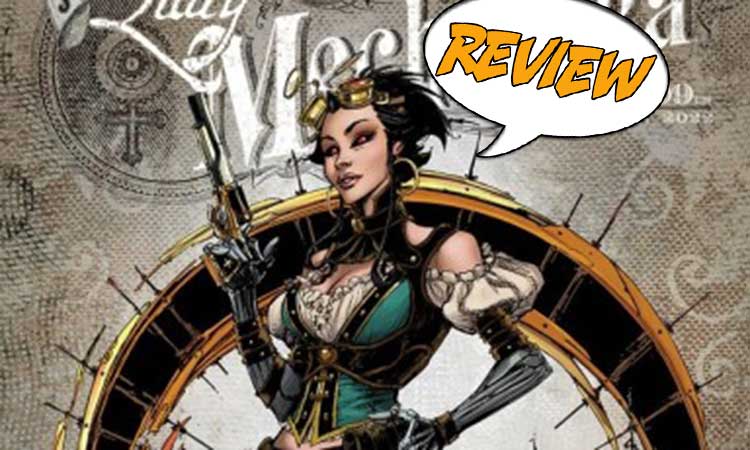 Lady Mechanika: The Monster of the Ministry of Hell #2 Review

Once an almost desperately feral child, Mechanika learns to control herself and is released from her solitary cell. Will she find friends among the girls in the dormitory, or something else? Find out in Lady Mechanika: The Monster of the Ministry of Hell #2 from Image Comics!

LADY MECHANIKA: THE MONSTER OF THE MINISTRY OF HELL #2

Previously in Lady Mechanika: The Monster of the Ministry of Hell: Things have settled down after her last adventure, and Lady Mechanika takes Fred to the Founders’ Day Fair. Dr. Littleton arrives with Allie. He has analyzed Lady Mechanika’s blood, and it has a strange substance in it. But all of this is a framework for the story of Mechanika’s meeting Katherine Winter, and that goes back to the past. Lady Mechanika was found as a child, locked in a basement. She already had her mechanical arms and legs. She was taken to the Ministry of Health where, by the hands of Deacon Grin, she underwent countless procedures, probes, and experiments, often not under anesthesia. One day she broke free and realized she was not the only young girl at the Ministry.

Lady Mechanika: The Monster of the Ministry of Hell #2 opens with Mechanika as a young girl, in a straitjacket, chained, and shackled in the Ministry of Health. This is horrifying, but it is also not far off from the way institutionalized people were treated in the Victorian age. Still, she fights when three men come to take her back to the Deacon for more work. It is all the more chilling when the Deacon invokes God as he works on her, torturing her as he tells her the Lord may take mercy on her.

One night, a girl comes to her cell, a girl named Kat. She talks to her kindly, brings her an apple, and gives her the advice that if she behaves in a more docile fashion, she may be allowed to live with the others in the dormitory.

This works and she is put into the care of Mrs. Cavendish, who makes it clear she must continue to be obedient and proper, or she will suffer the consequences. She is taken to the dormitory where the other girls, all of whom have some sort of disfigurement, find Mechanika as strange as she finds them. But Kat takes charge. Of all the residents, she does not have an obvious physical problem. And we learn some things about her almost immediately. She gives Mechanika the bed next to her, although it is Clara’s bed. Clara objects, but Kat reminds her that she is leaving in a day and talks her out of it. She is both charming and manipulative.

Kat continues to charm, although she comes across to me as having the potential to be a controlling creep. She says that as long as Mechanika listens to her, she will take care of her. In a wonderful midnight scene, we see these forgotten little girls sharing their dreams and supporting each other as innocent young girls. Kat keeps Mechanika aside and tells her they’re all delusional, that the Deacon is experimenting on them all. But Kat is someone special who is here by mistake.

Later that night, Kat wakes up Nora and begs her to help, since they are friends and Kat will always look after her. But Kat cannot get another infraction on her record, and Nora has never gotten so much as a warning. She wants Nora to take a fall for her. But this so-called minor first offense has horrifying consequences.

The art of Lady Mechanika: The Ministry of Hell #2 is stunning. The steampunk aesthetic is amazing, and it draws deeply on its Victorian roots. The medical devices in the opening scene feature ornately formed iron and utilitarian straps. Comfort and sanitation are not a consideration. Deacon Grin is horrifying, not only for his words and actions, but he also wears a sturdy leather apron as well as a mask. His face is hidden, but the mask has metal trim that gives it the appearance of a rictus grin. We know that he is one of the true monsters here.

But it is the little girls who are treated as though they are monsters. Their conditions are fanciful, more exaggerated than we might expect in real life, but despite their unusual features, we can see in their eyes that they are children, and traumatized children at that. To bring the point home, they are clad in high-necked white dresses with elegant, puffed sleeves. They’re very pretty and Victorian, but very institutional.

Lady Mechanika: The Ministry of Hell #2 covers a lot of ground. Lady Mechanika’s childhood was brutal, and it will be interesting to see how this early trauma influences the adult she later becomes.

Lady Mechanika: The Monster of the Ministry of Hell #2

Things are not always what they seem is one of Mechanika’s earliest lessons.