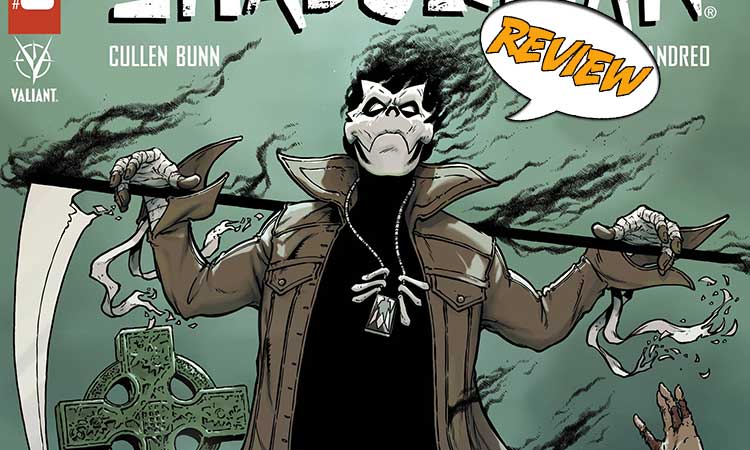 While Shadowman continues to take on Blights one at a time, he considers how to communicate with the Deadside. Is action or talk the way to handle the ongoing conflict? Find out in Shadowman # from Valiant!

Previously in Shadowman: The Deadside has been seeping into our world. Searching for answers, Shadowman travels to London where a Blight has been killing people. With Samedi, he finds where it lives and goes in to find it. When Shadowman inhales the Blight’s essence, he is not killed but instead understands that the Deadside is a Loa, but instead of riding an individual person, it rides the entire world. As he realizes this, he sees a woman that he identifies as a presence that is always with the Blights. And he understands that taking on Blights one at a time will ultimately be futile. He thinks back to his experience with the Shadow Loa and believes he understands what he needs to do for the Deadside.

ANOTHER HOLE IN THE BARRIER

Shadowman #5 opens in New England where a little boy talks to his dead mother at her graveside. He talks about praying, but his prayers brought him someone who told him how to bring her back, and indeed, she has returned. But it is as an animated corpse, and she is not alone! It’s a creepy opening, especially since the boy only sees the corpse as his mother and does not realize the enormity of what he has done. And it leaves us wondering who gave him those helpful instructions?

Back in New Orleans, Jack is playing at a jazz club. Alyssa meets him there. Jack has been busy and distracted dealing with the Blights and the rift between Earth and the Deadside. Alyssa understands this and has put together a team, the New Abettors, to help him. They look fascinating, and I hope we get to see them at some point, but Jack simply walks out. He does not want to risk their lives and dealing with the Deadside can be fatal for most.

He also worries that they might not understand what he is trying to do. He thinks back to his own experiences with the Shadow Loa. When he rejected it, it seemed to work against him. When they bonded, they grew stronger. He has been fighting this whole time, and now is when we see that he has been dealing with the aftermath of the little boy who brought his mother back. The boy cries to his mother, sorry for the death and destruction, but also desperate to have her back so he won’t be alone.

Shadowman is compassionate, for someone associated so closely with the dead. He asks Samedi for a favor, and in a touching scene, he grants the mother just enough life to say good-bye to her son. Shadowman then asks the child who taught him the spell. The boy can only say it was a monster.

Meanwhile, there is unrest in the Deadside. The Blights want to get to Earth but they keep finding the doors to be closed. Their high priest talks about the Adversary – and Shadowman, who is that Adversary, shows up. He tries to explain that they need to live at peace with the world. If the Deadside takes over Earth, all that will happen is that it will turn into the Deadside. The life and warmth they seek will be gone. He wants to talk to their Queen.

This angers the Gods of the Loa. Jack was chosen to be a warrior, not a peacekeeper. And what does his crazy plan mean for the Loa? At this point, the woman who is the Deadside arrives. She insists that Shadowman will not succeed. The Loa offer her a chance to join them – but she has other plans!

THE COLDNESS OF THE DEAD

The art of Shadowman #5 moves effortlessly from horror to liveliness and back again. The opening scene at the cemetery is full of the trappings of magic such as drawings of ritual diagrams and dribbly candles. The focus starts out tight on the boy, who is wide-eyed innocence personified. It is only after this is clear that the panels take us further back so we can see the magnitude of what his spell has wrought.

When Shadowman goes into battle, I love the juxtaposition of his thought process about what is going on with the Deadside with his actual fight against the zombies. There’s a terrific panel where he leaps into the fray and we see him from below with a backdrop of moonlit clouds. The blade of his scythe and the glowing eyes of the zombies are the only warm color in the composition. It is a fight he can easily take on, and it sets us up for his arrival in the Deadside where his entrance is just as grand, but his intent is not to fight. Through his growth, he has found the strength to do the unthinkable.

The Deadside is a fascinating concept, and I love the way Shadowman #5 proposes that it is not necessarily the enemy of the world, but a necessary counterpart. The mix of horror and heroics adds just a touch of lightness and makes it very approachable.

Shadowman thinks he knows the solution, but will anyone else be willing to accept it?