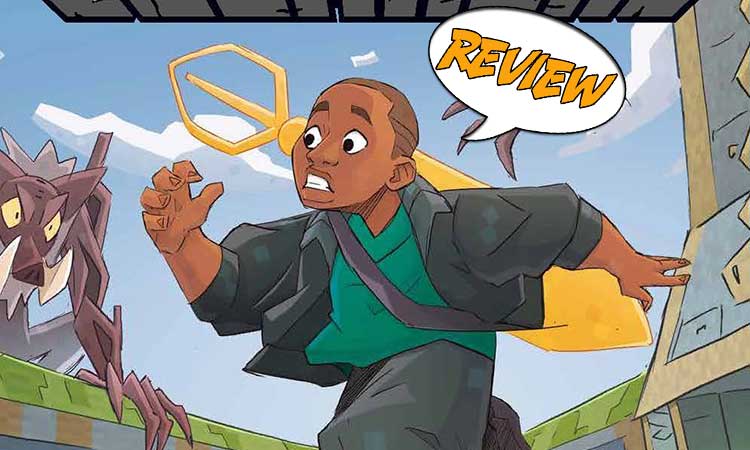 Toba’s life is getting stranger. Two of his new friends are missing. His mother is acting strange. And why do so many people have tattoos on their neck? Find out in Buckhead #2 from BOOM! Studios.

Previously in Buckhead: Toba Adekunle and his mother move from Nigeria to Buckhead, Washington. His father previously vanished on an archaeological expedition. In Buckhead, it is the first day of school, but things get weird. His friend Josue has a strange tattoo on his neck. He meets a strange girl who demands to see his tattoo. School is uncomfortable, but he meets Romy and Mel. With them and Josue, they explore the computer lab and find a closed door that leads to the basement, a secret room, and another computer system. They find a game called Elseverse and play until Toba finds and NPC that looks just like his father and addresses him by name. Later, when he goes to meet Josue, he sees him surrounded by men in black, and his own mother!

TODAY IS WEIRDER THAN YESTERDAY

Buckhead #2 opens with a flash of lightning as Toba falls from the tree outside Josue’s room. He doesn’t think that was really his mom and he’s concerned for Josue. He runs home and no one is there. His phone doesn’t work. And when he looks outside, he sees men in black.

The story cuts back to Lagos before Toba and his mom moved to the U.S. She has a new job, and Auntie Meredith has some data she wants Bola to look at. Meredith also used to work with Bola and Wole.

Someone bangs on Toba’s door. It’s Josue. He accuses Toba of not showing up the previous day. Toba counters that he, Mel, and Romy didn’t show up and tells Josue about going to his house. He also says he thinks the goons in black took his mother. Whatever is going on, they still need to go to school. Josue doesn’t think he feels any different. But he does remember that Bola’s car was already gone when he came over. As weird as Toba’s story sounds, Josue still trusts him.

They get to school and neither Mel nor Romy are there. Toba does see the girl with the dog. Before he can talk to her, she runs off and he runs into a teacher who also has a tattoo on his neck. The girl gets away. He talks to Josue over lunch and comments on his tattoo, which Josue says is just a birthmark. Plainly it isn’t. Toba decides they need to play the Elseverse game again, and this time he wants to get a copy of it.

In his locker, there is a mysterious note, but he sets that aside for later. They go to the computer lab where the door to the basement is simply gone, but the wall is covered in fresh paint. Josue suggests meeting after school and trying to get some of the goons in black on video.

Toba goes home. He does find a lot of footprints in the yard. He also searches his mother’s room and finds documentation about the “Else Virtual Reality System.” His parents were working on a virtual reality system to preserve their country’s history. They ran out of money, and that is where Meredith Stone, from Stone Industries, came in. They wanted to build a VR tourist app. Whatever they discovered in the Edo Kingdom took Wole’s mind, and Meredith has been studying Wole’s body and found out that the intelligence, Ewon, has taken Wole hostage.

Toba’s mother comes home. Toba is relieved, but when he asks her about Ewon, she changes and the goons in black show up…

A DAY IN THE TWILIGHT ZONE

Buckhead #2 has a surreal tone, and the art reflects that. There is a real world, and there is virtual reality. In Toba’s real world, strange things keep happening, weird things that feel more appropriate to a virtual reality. Even normal things feel off-kilter. Josue goes to Toba’s house in the morning, and not only are the panels angled, but the viewpoint shifts angles. Two kids go to school, but everything feels a little bit off.

The mystery has a horror flavor, but this is an all-ages book. Rather than confront us face-on with terrible things, there is a pervasive creepiness which is equally effective. Horror stories have an internal rhythm alternating between building up the disquieting feelings, and then relaxing them with more normal, even humorous situations, and then returning to the horror. This book follows this pattern flawlessly to hit its peak on the scene with Toba’s mother. Her transformation is terrifying.

Buckhead #2 is tense and fast-paced. Toba is a sharp young man, and he has found himself in the middle of something big, something that affects both his family and his friends. The book is intensely engaging, and I look forward to seeing what happens next.

Things are strange in Buckhead, and maybe a video game is the key to the mystery.