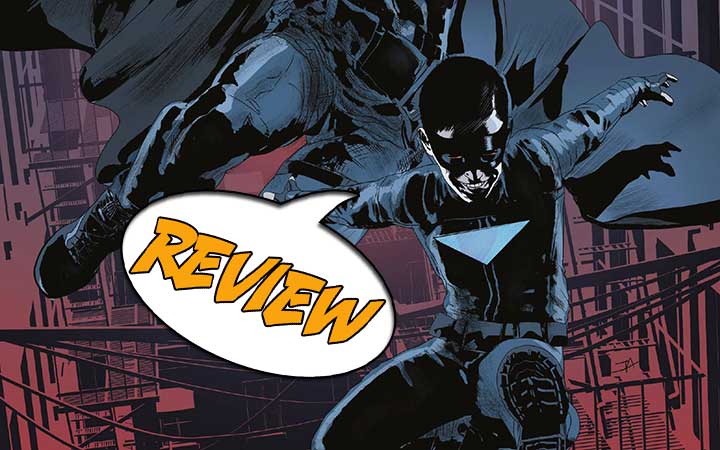 Private eye Jake Stevens takes on a case to track down a vigilante crime-fighter who disappeared twenty-five years ago. When he starts pulling threads, what will unravel first? Find out in Cloaked #1 from Dark Horse Comics!

Previously in Cloaked: Twenty-five years ago, a masked vigilante, appeared on the scene. This was the start of what became a one-man war against crime. No one knew who he was or where he came from. He became a legend even as the bodies piled up. Fact and fiction blended together, and his story became larger than life. And then…he disappeared.

THE AFTERMATH OF A VIGILANTE “HERO”

Cloaked #1 opens with the Masked Man’s back story. He isn’t a superhero, but he wears a mask as he guns down criminals. He drives a fancy roadster and even has a young boy sidekick. In his victims as well, there are a few more nods to Batman, but this guy is a walking moral dilemma.

We cut to the present where a billionaire, Byron West, has asked a private eye, “Jake” Stevens, to meet with him. West is rich and influential with ties to Wall Street and big tech. He has also done his homework on Stevens. He was once a detective with the NYPD who made a name for himself by breaking cases using illegal methods. He started his own agency and is scraping by. Stevens knows he’s a loser, but it irks him to hear it from West. But West thinks he still has skills as a detective, and he won’t let the rules hold him back. He figures Stevens is the guy who can track down the Masked Man, if anyone alive can do it.

Stevens’ gut reaction is to turn him down. Twenty-five years have gone by. Lots of others have searched for him and no one has found him. But money talks, and West is willing to put up a lot of money. Reluctantly, Stevens agrees even though the reason seems thin. Apparently, the vigilante helped West once, and he wants to cement the Masked Man’s legacy. There is a strong noir feel to this story.

Stevens heads to the NYPD. He knows a detective who worked on the vigilante case when the Masked Man disappeared. She is not terribly enthused about helping him but will do one last favor. She does one better than that by also giving him the current address of one Dicky Johnson, the vigilante’s former “Wonder Boy” sidekick.

Johnson seems a little down on his luck, but with this job, Stevens has some money to play with. A hundred bucks gets him a conversation. This is where the story takes an even darker turn. Johnson told a lot of stories to the press back in the day, but he made a lot of it up just to keep the money rolling in. People wanted to believe the stories. In real life, it was different. One day a man met him and asked if he wanted to make twenty bucks. He would put on the uniform and ride around with him for twenty bucks each time. That’s already kind of creepy, but the whole story is that he was sending Jackson, twelve at the time, in as a decoy, a distraction, so he could gun his quarry down. Afterward, he would drop Jackson off. He knows nothing useful about the man himself.

Jackson claims he has nothing more to tell. Stevens offers to buy more time. He turns that down, but he doesn’t say no to having him pay for happy hour down at the local bar.

The art of Cloaked #1 is straightforward and gritty. Strong shadows are used as an accent throughout which adds to the stark flavor. One side effect of this, though, is that often people’s eyes are just completely black. It adds something to the noir flavoring, but we don’t get to see any subtle expressions communicated through the eyes. I like they way Stevens comes across as a two-bit detective, bitter and rather rumpled.

The scenes with the vigilante in them are dramatic. The vigilante wears all black with a cowl that completely covers his face. His eyes are shown in red, which gives him an eerie feel. He does indeed wear a cape. Much like any of the characters in the story, we don’t get a read off him, but he seems cold. His car is really cool though. Oh, but when we see a young Dicky Jackson walking into a warehouse where they first make fun of his costume, then tell him to get out, then talk about shooting him… It’s extremely uncomfortable seeing a kid used as bait.

BOTTOM LINE: THE COLD CASE OF A COLD MAN

I like the way Cloaked #1 takes the vigilante “one man army” trope and uses it as a backdrop for more of a classic detective story. It’s dark and it is intriguing.

Twenty-five years ago, a famed masked vigilante vanished and now someone wants to find him again!