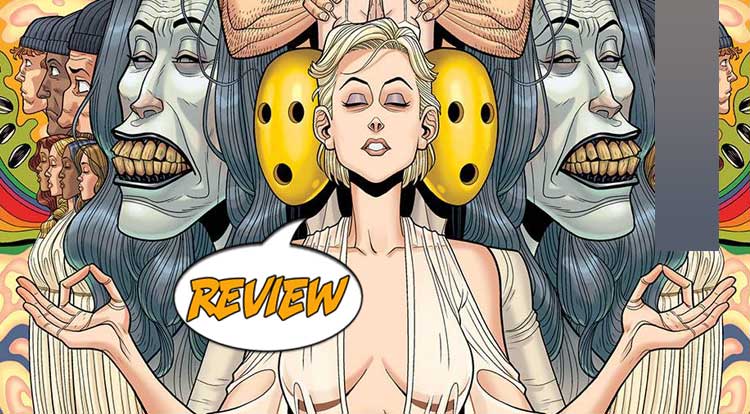 The first scene of Vinyl #5 is a woman named Rennie sewing together a mask of human skin as the previous owners bleed out into a tub.  Tearfully, she prepares for her next action, while her friend Victoria breaks in and tries to bar the door, screaming that someone is coming.  As Rennie submerges herself in blood, a man named Walter faces (and bisects with an axe) an undead monster, while more abominations enter their facility.  It’s a Herschel Gordon Lewis style gore-fest for a few pages, but when the metaphorical smoke clears, Walter and his merry band of serial killers are still standing… mostly.  Guy has fallen, and Victoria, Rennie and Dennis are running for cover and lots and lots of hand sanitizer.  As for Walter, he calmly explains that Madeleine will continue coming after all of them, regardless of the personal cost, unless someone stops her.

And he will not allow that.

Having gone into Vinyl #5 cold, my first impressions were about the swift and blinding violence, and how gleefully and clearly it is delineated on the page.  It’s truly impressive seeing Rennie with her bone swords, dripping blood while wearing the face of a dead person, and the three-page sequence showing Walter’s defeat of a zombie with an axe to the head is nothing short of breathtaking.  There isn’t any wool-gathering in this issue, and even the flashbacks of Walter recruiting and/or kidnapping members of our cast move fast and do not hold back.  Having gone back to read the first four issues, I have a greater understanding of this issue’s events, but to be honest, that lack of context didn’t damage my initial reading of the story.  It’s a comic that knows exactly what it wants to be, crafted by a creative team who know how to make that happen, and that’s an impressive feat unto itself.

The fun of Vinyl #5 comes in seeing the story’s action and violence flying exuberantly off the rails, with excessive violence and blood that can’t quite hide the heart of the story, and while I don’t think that I *like* the cast necessarily, they are entertaining to read about, and the art makes for a blood-feast, if you’re into that sorta thing, earning 3.5 out of 5 stars overall.  I’ll tell you this, too: I’ll absolutely be back for next issue’s closing chapter.

This issue is all action, which doesn't leave a lot of room for explanations, but man, does it do the action well.