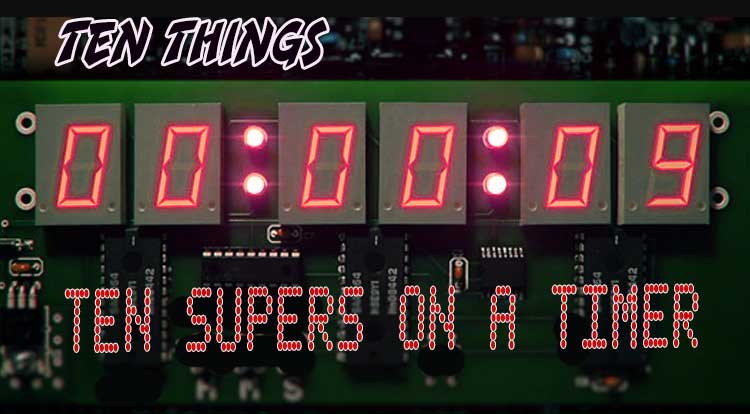 Ten Supers On A Timer

Some say having a deadline leads to better work.  Some of our favorite superhumans might agree.  Welcome to Ten Things: Ten Supers On A Timer!

Whooshman-Bicarbonate Films, in conjunction with An Amateur Comics Historian and Rex Tyler’s Hour of Power, Presents: The first Silver hero in Super Sentai history, Yuusaku Hayakawa’s power-suit was the prototype for the rest of the MegaRangers, which meant that he was more powerful than his fellow Rangers.  Unfortunately, it also retained an early design flaw that limited him to 2.5 minutes of operation before powering down.  He fought for his place on the team and eventually overcame his limitation in time to help defeat the evil Nezirangers and starting a Sentai Silver Legacy that continues to this day. In the earliest adventure of The Mighty Thor, he believed that he was Dr. Donald Blake, a normal man who simply channeled godly power through a magic cane he found in a cave.  If he was separated from his hammer for more than sixty seconds, Thor would revert to his disabled human form.  Later stories revealed (which is to say, retconned) that the Blake identity was merely a  gambit by Odin himself to teach his son humility, and that he had always been the real, mythical Thor of legend.  The sixty-second rule returned when Eric Masterson was acting as Thor in the 1990s. Dr. Peyton Westlake developed a revolutionary new synthetic skin to help burn victims, but found that it disintegrated after 99 minutes of use.  This made is useless for its intended audience, but the perfect infiltration tool after he was horribly burned during an assassination attempt.  As Darkman, Dr. Westlake targeted the crime syndicate that tried to kill, protecting his wife (who thinks he is dead) and basically out-Batmanning Batman.

He is everyone… and no one.

He is everywhere… and nowhere.

He is, amazingly, a young Liam Neeson and also… DARKMAN (at least for an hour and a half at a time.) Roger Ramjet and his Eagles
Fighting for our freedom!
Pow’r of twenty atom bombs,
so villains know he’ll beat ’em!

Roger Ramjet he’s our man
Hero of our nation!
Twenty seconds at a time’s
His power limitation!

Come and join us all you kids
For lots of fun and laughter!
As Roger Ramjet and his men
Get all the crooks they’re after!

Roger Ramjet he’s our man
Hero of our nation!
Not too bright, but still he fits
Today’s classification! After accidentally imprinting on her brothers superhero transformation unit, Mirai Ozora creates her own superhero identity, with a cute skirt and hair bow.  Unfortunately for big brother, the erstwhile Captain Tokyo, the system then randomly switches between his costume and hers, forcing him to share the powers with her (and occasionally to end up wearing her magical girl skirt.)

What’s a Moldiver?  I don’t know!  But you can only be one for precisely 666 seconds at a time, after which your costume dissolves and leaves you hilariously naked. A production of Tsuburaya Productions, the company that brought us Ultraman, Gridman is an alien Hyper Agent from another world who inhabits a computer game superhero to defeat a cyber-criminal.  In order to do so, he bonds with schoolkid Naoto Sho to fight literal viruses in the computer world, but the system’s limitations mean that he can only be active for three minutes at a time.

Gridman made its way to Western audiences as Superhuman Samurai Syber-Squad, which starred Joey Lawrence’s little brother and…   It was just not good, y’all. The whole “incredible power for a limited time” schtick is very popular in Japanese superhero media, it seems, as Kotetsu T. Kaubragi, the Crusher for Justice, can initially only boost his powers to superhuman levels for five minutes at a time.  Since the heroes of his world are professionals, sponsored by corporate entities, Wild Tiger’s suit bears several real-world logos, all of which are sponsors of the actual program in which he appears.  Of course, Kotetsu is more focused on doing what he feels is right than what is best for his corporate overlords, which causes him a lot of problems.

Of course, if you watch it on US Netflix, the logos are scrubbed, which makes the whole discussion (and a large portion of Tiger and Bunny’s plot) moot. Thanks to a mystical trinket known as a Miraculous, Marinette Dupain-Cheng can transform into her super-form, giving her superhuman speed, agility and strength.  With her yo-yo of power, she can swing from building to building, reminding me of Spider-Man, but can only remain in her Ladybug form for five minutes at a time.  Also reminiscent of Spider-Man, she was something of a milquetoast, with low self-esteem, until she unlocked her heroic potential.  She’s also one of the most resilient heroes of her world, once using SIXTEEN Miraculouses at once. Hal Jordan, the Green Lantern of sector 2814, has seen some mileage in his sixty-plus years of superheroing, but one thing that remained relatively consistent was his need to recharge his ring every 24 hours.  These days it’s less an arbitrary per-day time limit than it is a problem with battery depletion, meaning that he may need to recharge more often, but either way, Hal has to stick his ring in his power battery on a regular basis.

This Hal is from the 90s, where he was treated as a respected elder statesman hero, some years before “arrogant loose cannon hothead” became the primary cornerstone of his characterization. A mysterious Sixth Ranger (technically the fifth Cure of Doki Doki! Pretty Cure, but why argue semantics when I’m rolling), Aguri Madoka is remarkably powerful, but can only maintain her Cure form for five minutes at a time.  Though she initially keeps this secret though a series of Batman entrances and exits, she is revealed to be first a fourth grader, and then something even more terrifying.  (If you’re not afraid of fourth graders, you’ve never tried to teach them.)  Her signature move is a literal kiss-off called the Ace Shot, which involves her first putting lipstick, then attacking, with the color of her lips signifying the effects of the attack.

Thanks to Faithful Spoilerite and Nerdery™ regular J Michael T for this week’s topic, Ten Supers On A Timer. Feel free to follow along @MightyKingCobra for more Ten Things madness on Twitter or check out the full Twitter archive here!  As with any set of like items, these aren’t meant to be hard and fast or absolutely complete, if only because arbitrarily limiting a hero’s power is one of the most common super-tropes.  Either way, the comments section is below for just such an emergency, but, as always: Please, no wagering!