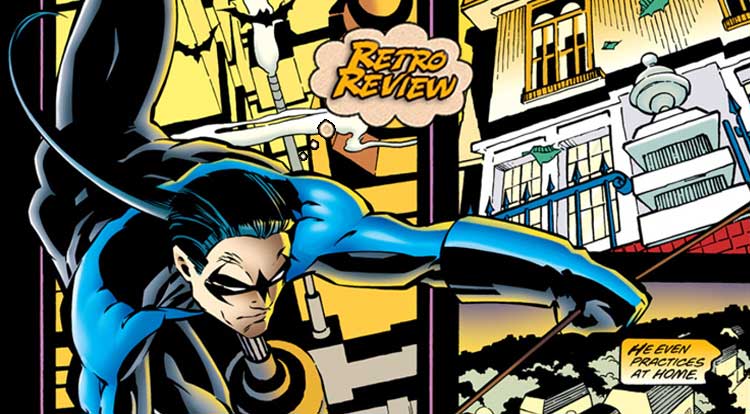 He’s out of the shadow of the Batman… and into the sights of every criminal in Blüdhaven!  Your Major Spoilers (Retro) Review of Nightwing #1 awaits! Previously in Nightwing:  After giving up the Robin colors, Dick Grayson has struggled to find his place in the world.  His wedding to Starfire imploded, the New Teen Titans have been a nightmare of time travel and explosions and working in Gotham City invites constant comparison to his adoptive father/mentor Batman.  But now, a series of unsolved murders in the nearby city of Blüdhaven have put Nightwing on the trail of a murderer. We begin with Nightwing drowning in the Blûdhaven River facing certain doom as he struggles to pick the lock on a handcuff that drags him to the bottom, thanks to a refrigerator, triggering the oh-so-90s Flashback sequence.  After discovering a number of corpses, Nightwing had headed down the coast to the city, described in the issue as worse than Gotham in terms of corruption, crime and general social rot.  This issue is the first appearance of Blȕdhaven, and it’s existence raises a number of questions that are never satisfactorily addressed anywhere.  Why wouldn’t Batman get involved?  Or other crimefighters?  And since Gotham has (as of this issue) spent nearly sixty years as the worst hive of scum and villainy in the DCU, why haven’t we heard of this place before?  None of these questions will ever get answered before the city is nuked out of existence in 10 year, so we should probably just take the MST3K mantra to heart.  The Blūdhaven trouble starts the moment Mr. Grayson gets off the bus… Witnessing two jerks harassing a barely-out-of-her-teens girl is the blunt instrument to tell us how bad this city is, but nobody ever accused Chuck Dixon of narrative subtlety,  And speaking of things that scream ’90s, Dick’s hair and pants in this sequence were borrowed from a Power Ranger who was watching Arsenio Hall and drinking Crystal Pepsi.  Even better, when he goes into action, his epic mullet is pulled back into a rat tail that Ewan MacGregor’s Obi-Wan would envy.  It’s a thing of beauty and I’m sure that it helps him to track down a gang of criminals in the employ of Gotham crime boss Black Mask, who was played on film by Ewan MacGregor, giving us the rare and precious pop culture Yahtzee. Instead of the kidnapped children he thought he was saving, though, he discovers frozen embryos belonging to the local drug kingpin, whom Black Mask intends to shakedown for a piece of the Blṻdhaven drug trade.  Which brings us back to the point where Nightwing got thrown in the river, and his desperate attempts to not die in the filthy waters. It’s actually a nicely handled action sequence, but I find something weird about Scott McDaniel’s art in this issue.  It’s not quite as stylized as I remember it being, which may be Story’s inks or may just be a young creator playing it safe as they develop their own style.  Either way, the encounter makes it clear that the former Boy Wonder is going to have to extend his vacation in Blũdhåven, as this case isn’t as simple as it seemed to be.  He then, rather foolishly, decides that he needs to team up with the local police to bring Black Mask and his gang to justice. It’s a pretty solid ending, albeit a slightly predictable one in an issue where the plot is almost entirely devoid of surprises.  That said, Nightwing #1 has a lot going for it, and by the end of the issue, I feel like the art has already begun looking like what I expect from Scott McD, and while Dixon provides no real tension or surprises, the story comes across as a sturdy beast that launched a run more than 150 issues long, earning 3 out of 5 stars overall.  I’m pleased to say that I find this book much more entertaining than I did when it actually came out, which means that either it or I have aged more gracefully than expected.

Heck, why not call it both?  Also: Blųdhṹvůn.

No surprises, but the story gets the job done, and it's interesting to see McDaniel's art evolving from panel to panel as the issue goes on.