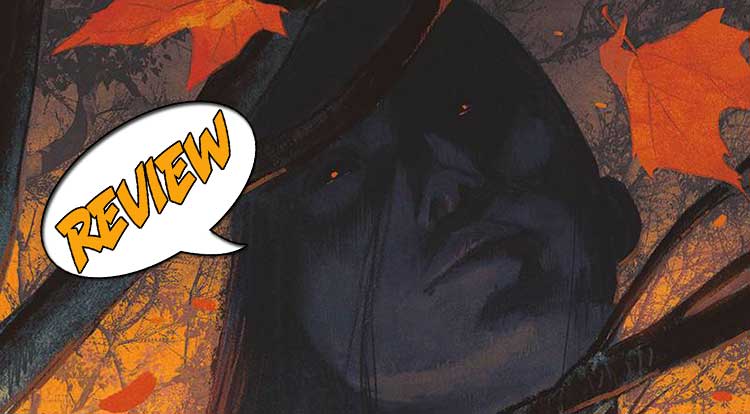 Comfort Notch hides some secrets, one of which is the story of Clementine. Who was she, and why are people still terrified of her? Find out in The Autumnal #4 from Vault Comics!

Previously in The Autumnal: Kat Somerville tries to fit into life in Comfort Notch, but it feels strange to her. She takes a day to get out of town. After drinking a little too much, she finds her way to a tattoo removal place and gets into a conversation with Rob, the proprietor. Her life has gone from incredibly difficult to practically perfect and she has had problems adjusting. When she gets home, her daughter Sybil shows her a drawing she made of “Clementine,” a woman who lives in the trees, which triggers memories for Kat. Then she learns that the man across the street has died, from choking to death on leaves. Sybil finds her grandmother’s photo albums. While the early albums show her happy life with young Kat, later ones include her newspaper photos, including pictures of a major fire in Comfort Notch.

Kat is in the library as The Autumnal #4 opens, researching a fire at the skating rink several years ago, a tragedy that killed eight people, mostly kids. She hardly has time to start reading before the librarian approaches and asks her to stop and return the newspapers. Kat stands up for herself and the librarian threatens to call the Sheriff. Kat holds her temper in check and quickly snaps some photos of the articles.

This is not a lot, but it is enough to give her the names of a few of the survivors. They don’t have anything to say, until she visits the trailer of Carol Ravintzky. Carol claims to have a rifle and insists she doesn’t want to talk to any of the usual types of people who knock on doors, but Kat gets her attention by asking about the fire. Carol is almost as blunt and abrasive as Kat is and asks for cash. It turns out that they were once in the same grade, back in the days before Kat left town. Carol is now practically ostracized by the town, but she is willing to talk.

She talks about the kids at the skating rink having a strange sensation like they were being held, being unable to run or get away. Then Kat mentions the name, Clementine Biddle. Carol invites her inside and takes some drugs to calm her nerves as she talks. It’s taken us some time to get here, but the timing is about right. Comfort Notch feels solidly creepy, and we’ve seen more and more hints about Clementine and trees that make us curious about what’s happening.

Clementine lived in town a long time ago. She was beautiful; the Mayor’s son (Humboldt) was a cad; she became pregnant. This looks to have been in the early 1800’s. He would not marry her but took her to someone who could brew drugs to make her miscarry. Instead, she ran off into the woods, evading Humboldt for months until she gives birth on her own deep among the trees. She returns to him with the baby, thinking maybe now he would accept them. He kills the child and Clementine goes berserk, killing Humboldt and then his father. The townspeople exile her to the woods, preventing her from ever returning to town.

This is where the story takes a truly mythic turn. She is now a childless exile and her only remaining joy in life is to watch other people’s children at play. Her only protector ever has been the forest, and she gives herself up to it as a sacrifice, thanking it for its care. And now the legend is that at the end of some autumns, Clementine chooses a child that must be taken into the woods and left there. If the sacrifice is not made, several children will die. But the people go along with it because in return, they get rich from the special trees.

And now we learn about the obsessive raking. Every leaf could be one of Clementine’s eyes or hands. If a trail of leaves leads up to a house it could be a path for Clementine to get in.

THE INEXORABLE POWER OF THE CLOSE-KNIT GROUP

The Autumnal #4 paints the stark line between those who are part of the in-group and those who “don’t belong.” This is such a common human reaction that it can be a parallel for so many situations. Take the library scene. Kat is sitting quietly at a table and reading. The librarian comes up to her and, with no legal basis, asserts her power in quietly veiled threats. If Kat has any reaction but compliance, she will be in the wrong. We see her restraint as she realizes this and takes her defiance outside, picking her time for battle.

Carol is drawn unflinchingly. As a child, she was caught in the fire and suffered disfiguring damage. The event has scarred her for life. The physical scars we can see. The emotional scars are invisible but may be worse. She is a survivor, but she is almost as exiled as Clementine was. She is not pretty and perfect like the town. Or she’s a symbol of their failure – a child who should have been a sacrifice but somehow had the temerity to survive. In every panel we see her defiance, and when she’s alone, we see the toll it has taken on her.

BOTTOM LINE: THE HIDDEN UGLINESS BEHIND THE NICENESS

The Autumnal #4 is strongly metaphoric. It deftly weaves an old legendary horror through everyday conflict and suddenly we find ourselves like Kat – on the outside of a huge tragedy make bigger by conspiracy.

The history of Comfort Notch is revealed, and there really was a Clementine.