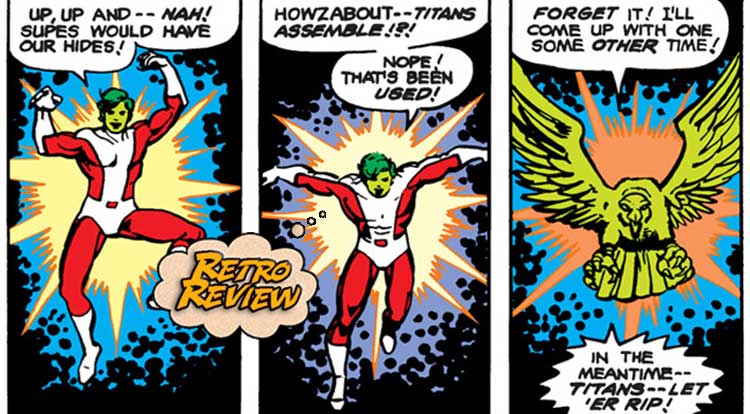 The legends say they not only saved lives…  they saved DC Comics.  Are you ready for the NEW Teen Titans?  Your Major Spoilers (Retro) Review of DC Comics Presents #26 awaits! Previously in DC Comics Presents:  In this rarest of cases, what has been happening in the comic isn’t of any use at all to what we’re actualy here to talk about.  Superman has been involved in a space adventure that will lead to the first appearance of Mongu next issue, while the backup feature has been revisiting neglected DC characters and explaining what happened after we had last seen them.  (This issue features the a story of Sargon the Sorcerer, with next issue bringing back Congorilla, both not seen for more than a decade.)  But this issue also has a 16-page preview of the title that reputedly changed the game for 80s DC Comics: The New Teen Titans! It begins, as most Teen Titans lineups do, with Robin.  While responding toa az hostage situation at STAR Labs, the Teen Tonder is suddenly overcome by dizziness, and finds himself with Wonder Girl outside a strange T-shaped tower that readers in 2020 will recognize (if only from a cartoon.)  Confused by his seeming teleportation, he is led inside to meet…  a talking lime-green chimpanzee? Even though a couple of old friends are present, a group pf superhero strangers all seem to know him and treat him as their teammate.  When a caped woman called Raven arrives, she reveals that is is she who called the team together, explaining that a scientist at STAR Labs has accidentally opened a portal to another dimension, releasing a giant protoplasmic monster into New York City.  If you’ve never seen young George Perez’ take on Raven, you’re missing out, as she’s beautiful and terrible all at once, hinting at the demonic heritage that wouldn’t be revealed until the debut of the actual Teen Titans book a few months later.  The team leaps into action, with Changeling workshopping battle cries, heading into the city to find a nightmare. Their strongest attacks are shrugged off by the creature, and as Robin races up the stairs to try and help, he once again blacks out and returns to reality, only to find that he was just nearly killed.  As he tries to deal with the problem in the present, he is again consumed by his dream/hallucination, finding himself in battle alongside Cyborg, Starfire and his old friends, with the new characters each getting a moment to shine, showing off their powers and personalities. When they arrive at the lab in question, an infuriated Cyborg realizes that the scientist in question is his father, Silas, and tries to leave, only to have the creature attack once more.  As Doctor Stone and his son fight, Robin returns to reality to find that his hallucinations have saved the day! I remember the first time I read this book, and I remain impressed with how well Wolfman and Perez made the flash-forward gimmick work.  It’s easy to see from DC Comics #26 how the creative team’s New Teen Titans became the hit that likely saved DC Comics from a complete crash, simulating a little bit of X-Men angst and working in the decades of DC continuity with a few entirely new touches, making for a better-than-average 4 out of 5 stars overall.  Even if you only know the Teen Titans from ‘Teen Titans GO!’, this issue is worth a read…  at least the Teen Titans part of it.

The Teen Titans are the star of the show, with Starlin doing some okay stuff in the lead feature and a Sargon backup that doesn't really do much for me, but it's a great first chapter for the New Teen Titans.