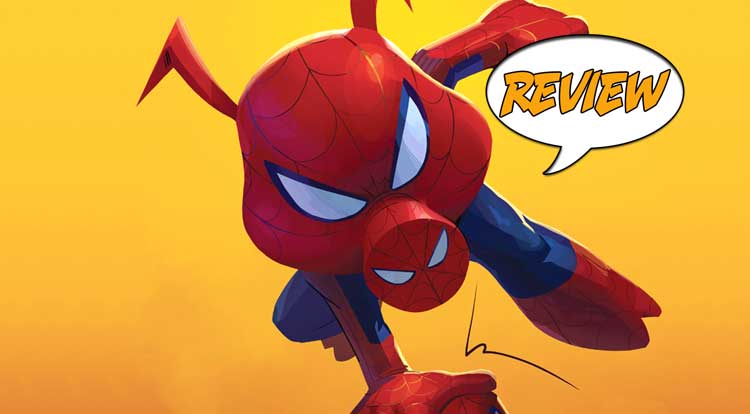 From ‘Into The Spider-Verse’ to the pages of our favorite comics!  Your Major Spoilers review of Spider-Ham #1 awaits! THE SENSATIONAL CHARACTER FIND OF 1983!

Bitten by a radioactive pig, the young spider that would become known as Peter Porker was mutated into porcine form, gaining incredibly super-powers along the way! Unfortunately, he’s also really, really bored with the day-to-day job of saving the city after a couple of years of traveling the multiverse in the company of the Web Warriors and literally hundreds of superhero counterparts of himself. This lead to friction with the Sca-vengers, greatest super-team of Earth-8311, who vow never to speak to him again after yet another unpleasant interaction leaves them annoyed. He goes home to Aunt Ham’s house (where she hints that he needs to move out), can’t sell any photos to J. Jonah Jackal (since they’re all full of freakish pink-skinned, five-fingered mutants from our Earth) and even has his dimensional-travel watch stolen by The Unhumanati, a secret cabal of supers who operate in the shadows. When he shows up to try and get it back, he is treated to a two-page screed from all the other heroes about how irresponsible, terrible and smelly he is, leaving him crushed…

…until he ganks his watch and teleports to another dimension to save the day!

THEY SHOULD HAVE DONE THIS A YEAR AGO

The timing of this issue feels really off, especially since Spider-Ham’s attention-grabbing appearance in the mega-popular “Spider-Man: Into The Spider-Verse” is now more than a year old. Granted, that’s not a deal-breaker, but it’s curious to see Marvel continuously behind on catching the popularity of their characters with new audiences. Add in the fact that this issue mocks Spider-Ham SO THOROUGHLY that it seems to be mocking not only his faults, but the character, his universe and the underlying concept of funny animals in general. That’s only compounded by the threat in this issue, a strange wave that literally makes Deerdevil, The Thang and Hulk-Bunny dark and angry, implying metatextually that the bright, funny Spider-Ham is somehow wrong. Will Robson’s art is quite good throughout the issue, though, combining the traditional Joe Albelo look (which is good, since the origin seen here is reprinted from Albelo’s work in #15 of the original ‘Spectacular Spider-Ham’ comic) with a slicker, more modern take that more resembles today’s Marvel output. Special attention should be paid to the coloring of Erick Arciniega here, as he avoids the overly glossy look that has made some modern Spider-Ham stories garish and impossible, instead balancing the color with an animation-inspired palette that looks really great.

BOTTOM LINE: I HOPE THIS IS GOING SOMEWHERE

In short, this comic is kind of a mixed bag for me. While it’s good to see the other denizens of Earth-8311 again, the amount of scorn heaped on our hero makes Spider-Ham #1 a rough read tonally, but there are enough funny, dramatic and interesting parts to get past that, especially with the excellent coloring and art, leading to 3.5 out of 5 stars overall. I sincerely hope that this miniseries isn’t all going to be amusing character assassination of our ridiculous hero, especially given how popular Peter Porker is with the younger Spider-Man fans I know.

I'm not entirely sold on the tone, but the art and coloring look great and Peter Porker deserves another shot at solo greatness.