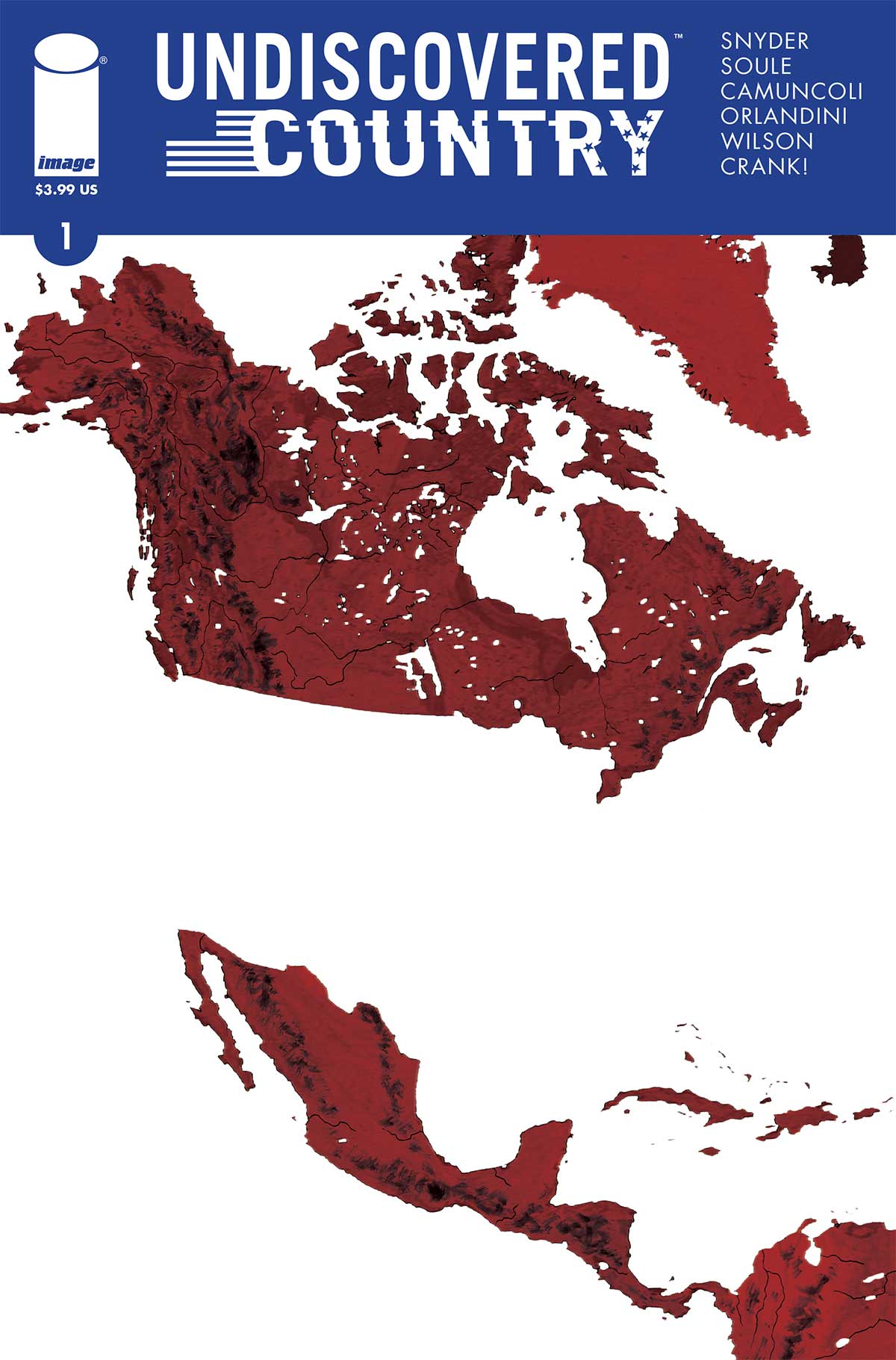 What happened to The United States? One team aims to find out, but they are not prepared for the answer. Your Major Spoilers review of Undiscovered Country #1 from Image Comics can be found, after the jump. Previously in Undiscovered Country: The world is not in good shape. Two empires containing a majority of the worlds nations jockey for poll position, poverty and famine have set in, and worst of all, the Sky Virus has placed the planet into a death spiral. On top of all this, The United States has locked itself away from the rest of the world.

TO FIND A CURE

The team is already on their way to the United States via helicopter when Undiscovered Country #1 begins. They are all on nerves as they approach, but it seems like things are going fine, that’s when they notice the missile coming for them. Things then flashback to Dr. Charlotte Graves trying to treat a patient who is suffering from the Sky Virus. A fleet of helicopters flies overhead, releasing a poisonous dust. That’s when Colonel Bukowski arrives.  He informs Charlotte that he’s received a transmission from the U.S., the first in 30 years, and he wants her to help him. Back in the present, they team managed to survive the helicopter crash with only minor injuries.  Colonel Bukowski says he can get the helicopter up but it’ll need fuel. He agrees to stay with it while the rest go on.  A few weeks prior the team is formed: A journalist, a pair of negotiators, what appears to be an anthropologist of sorts, Charlotte, and her brother. They watch a transmission that features a Dr. Samuel Elgin.  He claims to have a cure for Sky Virus and knows all about the strife facing the world and is inviting a delegation to come to The United States. Back in the present the team moves on when they encounter a motorcade of classic muscle cars and mutated animals being rode on by foil covered riders. They come across the colonel and a monstrous bison eats his feet. The rest of the group witnesses this from a far and take off running. They are rescued by a mysterious man who leads them to his mountain hideout. He leads Charlotte and her brother into a back room where he shows them a map of the current U.S.A. and reveals that he’s Samuel Elgrin and he wants the pair to save America.

THIS SHOULD GET INTERESTING

Being a fan of both Scott Snyder’s other creator owned work (A.D. After Death) as well as Charles Soule’s work on Daredevil, I was looking forward to this. I’m happy to say that it doesn’t disappoint. Undiscovered Country #1 introduces readers to a world that’s both existentially terrifying while being straight up cray cray. Even in the first issue there’s a satisfying sense of iconoclasm mixed with a plot that has a sensible amount of direness.The colonel getting his feet bitten off after being told “No foreign boots shall touch U.S. soil” says a lot about how this issue feels. Apart from the world building and tone setting the writing itself is well done.  There’s a lot of information that’s dropped on the reader in this issue without the use of any narration boxes or big exposition dumps, which is always nice to see.

Giuseppe Camuncoli, Daniele Orlandini, and Matt Wilson deserve a lot of credit for not only establishing a look for the world, but keeping it consistent even when things become strange. A lot of times when a book leans into a surreal approach, things also become grotesque. Now, while there is some blood in this issue, things never become unsettling. Instead the surrealism exists in things being slightly askewed or just a bit exaggerated. I mean, seeing basically Uncle Sam, battle scarred, dressed like a Tusken Raider, wasn’t something I expected to see, but I’m glad I did.

BOTTOM LINE: I’M ON BOARD

This series is off with a bang.  Undiscovered Country is pulling triple duty here: It manages to establish not only the world the story is set but also where it’s going, it also manages to be a pretty good story in itself.  If this issue is any indication, this is going to be a heck of a ride. 4.5 out of 5 stars.

Scott Snyder claims that this is a passion project for him and Charles Soule and so far, it shows. Couple that with art and colors by a trio of truly talented artists and you have the making for a great issue and the beginning of what could be a brilliant series.