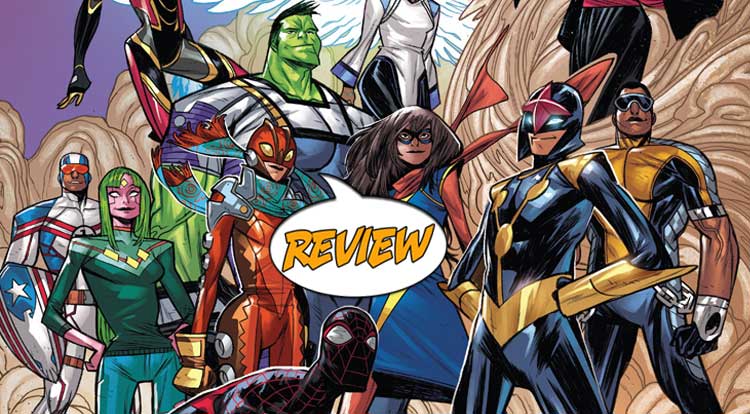 The next generation of Marvel heroes made a vow to do better.  Now, they have to live up to it.  Your Major Spoilers review of Champions #10 awaits! Previously in Champions:  The Champions were on top of the world with Ms. Marvel as their new leader and an army of promising recruits.  It seemed they were unstoppable.  Then, Miles Morales chose to walk away after accepting a deal from Mephisto that had unspeakable consequences.  And when Kamala learned of Miles’ bargain to save her life at the cost of another, she left the team.  Now, Blackheart, son of Mephisto, has infiltrated the Champions and turned them all against one another!

“SOMETHING HAS CORRUPTED THE NEW CHAMPIONS.”

This issue begins with Viv Vision’s consciousness starting to reload, as her Viv 2.0 programming explains what is happening: The original Champions (herself, Nova, Ms. Marvel, Spider-Man and Brawn) are under attack by the rest of the team (Patriot, Power Man, Red Locust, Ironheart, Snowguard, Dust, The Falcon, The Wasp, Pinpoint and Bombshell.) The anger and resentment that has built up through their last few adventures has allowed the new members to be controlled by Blackheart, son of Mephisto, forcing the teen heroes to deal with their emotional scars once and for all. Viv is forced to apologize to Ironheart for an unwise romantic advance, Brawn has to take responsibility for the deal with Mephisto and Spider-Man finds himself targeted once again by the demon who has been poking at him for several years now. When Blackheart brags that he’s already won, that Miles Morales will forever been in his thrall, the hero cuts right to the heart of the matter with a defiant response: “Then why are you still yapping?”

WAIT, IS THIS A LAST ISSUE?

The threat of Blackheart and the team slowly coming apart at the seams has been a theme of this entire volume of Champions, so when things started wrapping up and each situation was addressed, I got that “Last Issue” Spider-Sense tingle in my neck. Sure enough, this is the end of the current run, and it wraps things up relatively well, given the confines of the issue. Zub does a really good job of bringing each hero to the forefront long enough to address whatever they have been wrestling with but doesn’t make the mistake of making it feel like everything’s going to be all better just because they’ve talked about it. Blackheart is dealt with, Mephisto gets in the last word and the team gets one united moment to celebrate and go out for barbeque, with the promise that they’ll be back in ‘Incoming’ this spring. Artwise, Steven Cummings does good works with the issue, especially the big fifteen-hero clusterschmozz that starts off the action, but there are a few issues with the coloring that bother me. Everything is overlaid with a slight green haze, Spider-Man’s black mask is blue-gray and Nova’s black helmet is a shiny blue color. The layouts and expressions are excellent, but the coloring does those strengths no favors.

BOTTOM LINE: A SOLID ENDING THAT I TOTALLY DIDN’T WANT

As effective as this story is at closing up shop, it does feel a little bit abrupt if you’ve been reading the book for awhile, and the promise that these heroes will be back in a book that seems to start with a big ol’ murder isn’t promising. That said, Champions #10 does well in wrapping things up, and while it’s a shame that we probably won’t see some of these guys again (lookin’ at you, Pinpoint), it succeeds in giving closure while maintaining readability, earning 3.5 out of 5 stars overall. I’ll be waiting to see if The Champions as we’ve known them are ever seen again.

This volume comes to an appropriate, if somewhat abrupt, close and the team can now go on to the next big crossover.