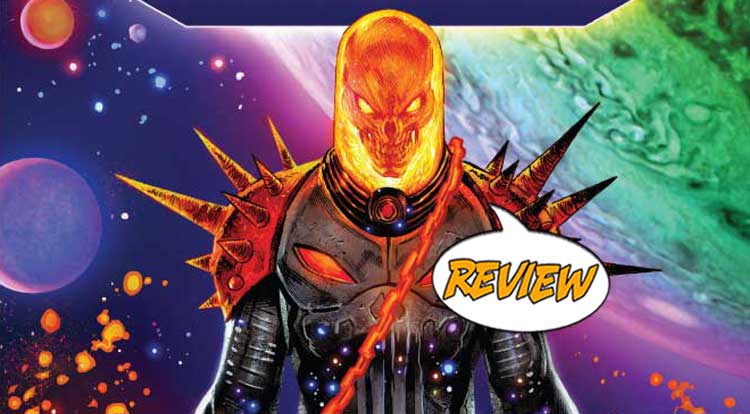 Frank Castle has walked a long hard road, but unlike The Punisher we know, he made a few deals here and there to make him more than just a guy with a gun.  Your Major Spoilers review of Cosmic Ghost Rider #1 awaits! Previously in Cosmic Ghost Rider: Frank Castle was the Punisher.  A deal with the devil made him Ghost Rider.  A deal with Galactus made him cosmic.  A deal with Thanos made him… DEAD?  Not to worry, he’s coming back, and he’s got a plan to make the universe a better place that’s going to lead him into an even CRAZIER adventure than he’s ever been in!

IN THE SACRED HALLS OF VALHALLA…

We open with the deceased Frank Castle (of Earth-TRN666, not of the main timeline, so don’t blow a gasket just yet) in the halls of Valhalla, after several pages that succinctly summarize his journey to reach that hallowed land.  Castle ends up not quite fitting in, to no one’s surprise, leading Odin himself to come to him and remind the former Punisher of a phrase that he heard once in Midgard: “$#&@ you and the horse you rode in on.”  Castle isn’t sure he wants to become the Spirit of Vengeance again, but Odin isn’t asking.  He reactivates the Ghost Rider and offers to send him any place in time and space that he wants to go.  Rather than go back to last Thursday night to pay his phone bill on time, he chooses to return to where it all began: Titan.  But not modern Titan, a Titan years past, where he intends to kill baby Thanos in his bed!

THIS BOOK IS *NUTS*

I don’t want to spoiler what happens next, because…  it’s pretty crazy, y’all.  But it’s also really entertaining and kind of satisfying, even ending with a surprise final page reveal of the utterly bug$&@ variety.  This comic reminds me thematically of Spider-Gwen, where the creators are given free reign to blow up whatever bits and pieces of Marvel lore they want, making for an unrestrained thrill ride story.  The art is likewise without restraint, with everyone long and lanky and wiry muscle, making the combat sequences really interesting.  That same elongation makes a few sequences read really strangely, though, so it’s not a perfect job, just an interesting one.  The design of Cosmic Ghost Rider is nicely handled, evoking the classic Punisher uniform while adding on elements that show off his deadls with the devil and Galactus, making for a really cool image.  (His word balloons being red-on-black are also nice visual touches.)  Best of all, the story doesn’t shy away from moments that should be ludicrous and making them fit perfectly into this unusual world they’re building.

In short, Cosmic Ghost Rider #1 takes a concept that absolutely should not work and devotes energy to make it sing, and while it’s not narratively perfect, it has energetic art and a story that engages me as a reader, earning a better than average 3 out of 5 stars overall.  I’m not sure that it’s going to stand the test of time, but it is enthusiastic and charismatic, making it worth a reader’s time.

I'm not sure that it's going to stand the test of time, but it is enthusiastic and charismatic, making it worth a reader's time.