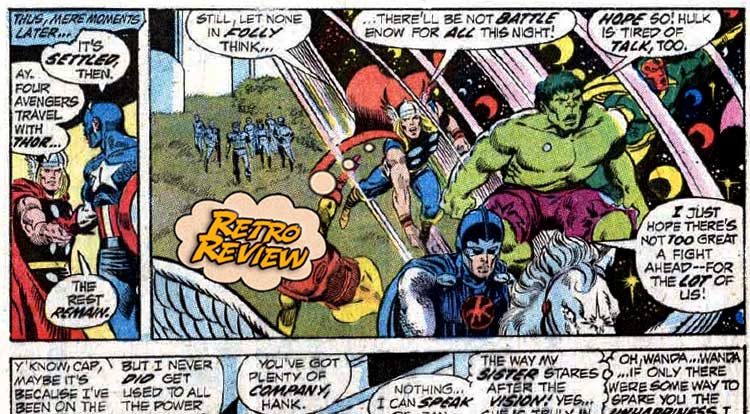 Once upon a time, a crisis so grave arose that all the Avengers who had ever been part of the team assembled to face it.  Of course, that meant fewer heroes than some modern lineups… and BOTH girls!  Your Major Spoilers (Retro) Review of Avengers #100 awaits! Previously in Avengers: “And there came a day unlike any other, when earth’s mightiest heroes were united against a common threat!  On that day the Avengers were born! — To fight the foes no single hero could withstand!” It is an unusual scene outside Garrett Castle this strange night, as superheroes suddenly begin descending out of the night.  The castle’s owner, Dane Garrett, the heroic Black Knight, watches as Avenger after Avenger arrives in answer to his summons…  including a founding member turned occasional foe: The Incredible Hulk! Bear in mind, Faithful Spoilerites, that this is 1972.  The shared universe aspect of the Marvel Universe is barely a decade old, and Hulk’s membership in the Avengers is one of those bits of Early Installment Weirdness that gets glossed over or swept under the rug most of the time.  As the heroes respond to the monster in their midst, Captain America takes the lead, urging his teammates to stay their hand, as the Green Goliath has been called as an ally.  Hulk, for his part, makes his usual diplomatic pronouncement, arguing that he is leaving, and no one had better get in his way… That’s… actually a pretty amazing moment, as even the mind of the Hulk understands that Avengers membership is something important.  Thus, they stand together for the first time: Ant-Man, The Black Knight, The Black Panther, Captain America, Hawkeye, Iron Man, The Hulk, Quicksilver, The Scarlet Witch, Thor, The Vision and The Wasp!  The entire roster of the Mighty Avengers, minus a certain Olympian demigod.  Hawkeye reminds them that Hercules being missing is the reason for their meeting in the first place, threatening to leave if people don’t get to the point… It is truly weird seeing Barry Windsor Smith’s pencils in this issue.  He hasn’t yet evolved into the BWS of ‘LifeDeath’ or ‘Weapon X’ but he’s also not the usual penciler one sees in this sort of story.  Of course, his work is perfectly suited to this unusual tale, as we discover that the Knight’s cursed Ebony Blade was not destroyed some issues before, but instead thrown through time and space to be discovered by Ares, with a little manipulation by Asgardian sorceress Amora The Enchantress.  Together, they seek out the Temple of the Promethean Flame, seeking to put it out.  Instead, the blade turns the Flame itself to a pillar of crystal, with unforeseen consequences in Olympus!

The arriving Titans turn out to be in the employ of Ares, who literally throws Hercules from Mount Olympus, leaving him to die and setting out to conquer Asgard as well, thanks to a hidden portal between the two realms.  Before the Assembled heroes can set out on their goal, a new arrival shows up to remind them that sending out a call to EVERYONE who was ever an Avenger can cast a pretty wide net… Faced with the need for a two prong assault, Thor splits the team somewhat oddly, with five heroes on one side and eight on the other.  He takes the most powerful heroes (Iron Man, Vision, Hulk and Black Knight) with him to Asgard, leaving Captain America in command of two mutants, two people who can shrink and three guys without little to no super-powers at all.  Of course, upon arrival in Olympus, his thinking becomes clearer when the heroes hit their first impediments… Captain America’s team sets off for London, where atmospheric disturbances indicate that Ares’ forces are attacking the Earth.  His team wades into the fray… …and their example leads the people of London to follow suit, joining the eight Avengers in battling monster pouring from a hole in the sky.  (Gotta say: “Go, London!”)  Thor and The Black Knight bring the battle right to Ares, which is pretty impressive for the basically-human Knight, I must say… The Enchantress flees the battle, only to find Hulk entranced by the music of satyrs.  She tries to leap through the portal to London, only to find that things are going badly for her partner…

Who can say which shot dropped the Olympian god?

Thor.  It was Thor.  But, regardless of its source, the damage is done.  Amora finds herself unable to flee, thanks to the influx of demons returning to Olympus, which in turn rouses The Hulk, proving to be bad luck for the lesser demons of Greek myth.  With the flame returning to normal, Thor frees Hercules, and the duo rushes out to find a badly shaken Iron Man (who literally spent the entire crossover out cold on the pavement, it seems) and The Hulk holding Amora hostage while enjoying more satyr-y tunes.  (They do a killer ‘Hotel California.’) …aaand scene!  It feels like an abrupt ending, but the thing about a double-sized issue is that it matter what you’re doubling.  Since paper shortages and other issues left Marvel’s books with only 18 pages during this era, even twice that makes it hard to do justice to an assemblage of more than a dozen superheroes.  This book’s story necessitated a showcase for Thor and Hercules, and surprisingly gave a large part to The Black Knight (whose short run circa issue #71 is pretty forgettable) and returning founder The Hulk.  This issue shows both the strength and weakness of working ‘Marvel Style’ with some lovely spreads and battle-sequences (the first page splash is a beautiful shot of the Black Knight and Valinor in front of Garrett Castle) but occasional moment where the dialogue has to work really hard to put everything together.  (See the last panel joke at the expense of the heroic Bobby who just helped the team fight off a horde of extra-dimensional monsteroids.)  In short, Avengers #100 is a microcosm of 70s comics, and 70s Marvel in particular, featuring some strong action sequences, lovely art, a modicum of high-falutin’ mythology in the writing, but suffering due to a lack of space and resources, earning a still well-deserved 3 out of 5 stars overall.  Heck, a BWS Hulk is worth the price of admission to me, and while I wish there had been more for Scarlet Witch, The Wasp or Black Panther, knowing that Iron Man got one-hit KO’ed and spent the fight unconscious helps to soften that particular disappointment…