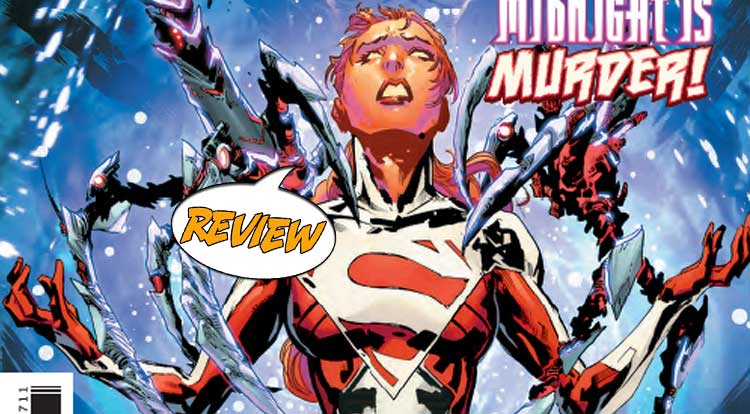 The worst villain of her superhero career has Superwoman on the ropes.  Can she pull it together long enough to outlast Midnight, or is it [INSERT DARKNESS PUN HERE.]  Your Major Spoilers review of Superwoman #17 awaits! Previously in Superwoman: “ ‘THE MIDNIGHT HOUR’ part three!  An inextricable link between Superwoman and the villainous Midnight may be the only hope in stopping the destruction of Metropolis.  Raging with the power to swallow cities or entire planets into the black hole inside her, Midnight looms for Superwoman.  Can she make it to dawn?

LOTS OF PUNS TO BE HAD ABOUT MIDNIGHT

As we open this issue, Lana “Superwoman” Lang is running out of power, while Midnight (an A.I. apparently created by Lana Luthor to steal her powers) holds all the cars, including a bunch of civilian hostages, and Lana’s main squeeze/partner, Steel.  Just in time, though, Natasha Irons and Maxima arrive to distract the villain, pulling Superwoman’s fat from the fire, for just a moment.  There’s a really charming dream sequence in the middle of this issue wherein she imagines being back home in Smallville, visiting with Superman about her situation and how she can’t just call him for help every time she has an issue.  It’s one of the better sequences, followed up by Superwoman’s entourage (including Traci 13, who is seeing Natasha, and an alternate Lois Lane) working together to get her one last shot at the villain…

…whiiiich doesn’t go so well for her.  The art in this issue is mostly solid, but there are a few moments where figures and facial expressions (especially in the Smallville dream) are unpleasantly fluid and melty.  A washed-out coloring job doesn’t help that situation either, but the overall effect of the issue art-wise is okay, with the last thre pages standing out as well-done action sequences.  I enjoy the character interaction and the the large cast here, and this issue provides an interesting look into how to be a superhero when you really don’t know you want to be one.  It’s something we’ve seen before, but here it has new resonance, thanks partly to the fact that it’s Lana Lang in the cool red suit.  The final page makes me think that things are about to get worse, but I’m confident that Superwoman will pull it all together for herself…

THE BOTTOM LINE: BEEN A WHILE FOR ME, BUT IT’S STILL GOOD TO SEE SUPERWOMAN

All in all, it’s a comic that I enjoy, albeit one whose creators still have room for growth, and that’s okay.  Everything doesn’t have to be alternate, murderous Batmans all the time, leaving Superwoman #17 with a better-than-average 3 out of 5 stars overall.  There’s much hay to be made with Lana wearing an S-shield, and this issue makes good use of that premise and the various denizens of Metropolis, making it more than just a Superman story with a ponytail…

Odd coloring choices and some moments of inconsistency in the art, but still an above-average issue of comics...