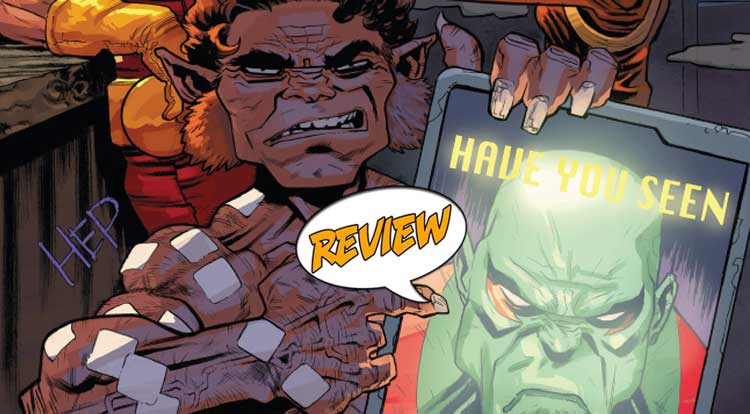 Some comics you love because they’re well drawn, some because their well-written.  Sometimes you get both AND get to see what happened to Planet Terry when he grew up…  Your Major Spoilers review of Drax #8 awaits! Previously in Drax: “Drax rescued a ragtag group of children Fin Fang Foom kidnapped in a half-baked scheme to find and hatch new dragons.  (At least Drax got a dragon egg souvenir.)  Drax and his crew – bartender/mechanic/former bounty hunter Ora, gladiator/machine Torgo and robot/head Robot Head – were returning the children to their families when Pip The Troll, Drax’s old daughter figure Cammi and Planet #$&$@ Terry showed up, seeking to cash in on a ludicrously high bounty on one of the kids.  Hopefully, once Drax gets rid of the prized abductee he’ll also get rid of his other tail: Ora’s old friend and violence-powered psychic, Killer Thrill.”

THINGS ARE GETTING CROWDED

We open on the bridge of Drax’s dilapidated craft, patched together by Rocket Raccoon in earlier issues, as eight creatures of various origins cram their way into the limited space.  Before their complaining can turn into something worse, the ship is attacked by space pirates, leading the crew to take action: Drax, Cammi, Torgo and Terry jump ship to fight.  The best part of the whole issue comes as the various crew members, unable to hear Drax’s hollering in airless space (The Destroyer needs no puny air, after all) providing their own dialogue for their erstwhile leader as he rages.  The pirates are taken out, thanks in part to the teleporting powers of Pip The Troll, but things get more complicated when Drax’s “souvenir” egg hatches, revealing a tiny blue baby dragon…

The fact that Punk and Bunn (attorneys at law) brought back Planet Terry amuses me to no end, as I’m the perfect age to remember the disastrous Star Comics line of 1985, but the fact that they have so easily made him work as part of cosmic Marvel is truly impressive.  The art team does great work as well, making Jack Kirby-created Torgo look like a Kirby creation, making Drax ridiculously muscular without going too far over the top, and deftly showing us the crowded conditions on the ship throughout the issue.  The large cast is, unfortunately, the book’s weakness as well, with a couple of moments within the issue becoming a bit confusing due to so many bodies in play.

Still, in the final analysis, this book works based on the strengths of the character work and the fact that all of the characters are just a little bit weird, and I like the fact that Cammi actually references the ordeal that she went through during the events of Avengers: Arena a couple of years ago.  Drax #8 is a solid, entertaining issue across the board, with some lovely dialogue and great use of Marvel’s deep bench of character, earning 3.5 out of 5 stars overall…

Perhaps a little bit weird, but befitting the unusual main character, and full of spacey 'splosions.