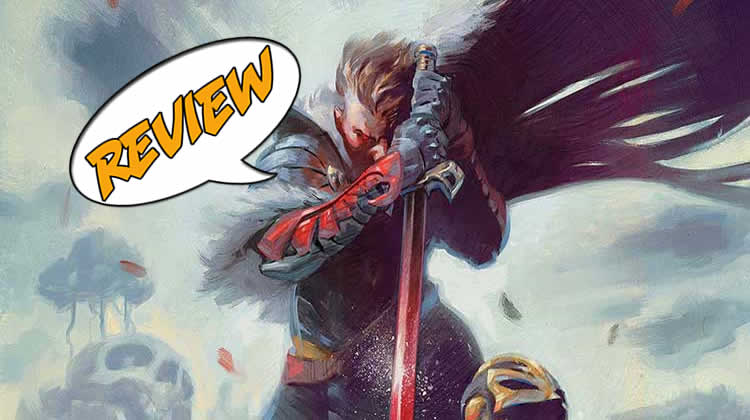 Most people who read Marvel’s comics are fans of the first-tier heroes – you know, like Spider-Man, Wolverine, X-Men, Avengers, and the like. However, I don’t fit into that category. Instead, I prefer lower-level characters like Stingray, Firebrand, and the Black Knight.

Well, that last hero-favorite of mine just debuted in a new ongoing series, and I enjoyed it! I have high hopes moving forward!

Previously in BLACK KNIGHT: “What do you do when it’s your destiny to be damned? For centuries, that is the question that has plagued each wielder of the Ebony Blade… with all of them eventually meeting untimely ends due to the sword’s curse. And it is the question the current Black Knight, Dane Whitman, must ask himself as his addiction to the blade grows ever stronger and he finds himself in the aptly named Weirdworld. What are the circumstances that brought him to leave Earth and enter this strange and dangerous realm? And what do the Uncanny Avengers have to do with it? Find out here in this new ongoing tale of sword, sorcery and one man’s struggle to not lose his soul.”

The Black Knight actually has a long history in Marvel Comics. The first version, Sir Percy of Scandia, first appeared in the medieval-adventure series Black Knight #1 to 5 (cover-dated May 1955 to April 1956) from Atlas Comics, the 1950’s precursor to Marvel Comics. He had a double identity and was recruited by Merlin to help protect King Arthur. The Ebony Blade debuts as a sword forged by Merlin from a meteorite.

Today’s Black Knight is Dane Whitman, Garrett’s nephew, and we first encountered him in The Avengers #47 (Dec. 1967). During the next issue, he becomes a heroic version of the Black Knight who sporadically appeared with the Avengers until becoming a core member, regularly appearing in #252–300 (1985 through 1989) and #329–375 (1991 to 1994). The Gatherers storyline running through The Avengers #343–375 (1992 through 1994) finally focused on the Black Knight, as the comic turned toward his tumultuous relationship with the Eternal Sersi and mysterious connection to the other-dimensional villain Proctor.

He was also seen in a recent Black Panther series in which his mission was to convert heathens into Christians, a change that pretty much came out of nowhere. It was my least favorite version of Whitman as the Black Knight, and hopefully soon will be forgotten (if it hasn’t been already).

Thankfully, this new comic brings Dane Whitman more closely back to where he started, as a heroic character who has a weapon he can’t use or else be cursed. Of course, that limits him in what he can do (except maybe get rid of the sword altogether).

Of course, like everything in Marvel, this book is tied into the recent Secret Wars happenings, placing the Black Knight in Weirdworld where he’s the leader of one portion of that island he’s named New Avalon. His area is set up like a medieval domain, and he’s got a specific goal to accomplish – defend everyone from the Fangs of the Serpent, the dominant force in his area of Weirdworld.

Dane has set up his own headquarters, and he even gets visits from the spirit of Sir Percy, the first Black Knight, when he needs advice. Dane is the only one who can see him, though.

The book concludes with some of Dane’s “friends” coming into his realm. I hope it means everything will transfer into the “all-new, all-different” Marvel Universe instead of staying in Weirdworld, but we’ll see!

I like the cover, which has a painted feel to it, very much! He’s holding the Ebony Blade, which has a red glow to it, likely signifying the curse it holds.

The artwork inside the book is strong, particularly when it comes to backgrounds and locations. I found the faces conveyed a little too simply for my tastes, though. I would have preferred more detail in them. The emotions displayed are always somewhat strong, with little variation for degrees. That’s fine given that Dane has been fighting since he first arrived in Weirdworld, but I’d like to see more than anger and surprise moving forward. I’m sure that as things progress, there will be more going on than simply battles and waiting for battles.

The colors were very well done, with lots of gradiated fills and the like. These helped accentuate the backgrounds and characters. Good job!

THE BOTTOM LINE: A Good Start

I continue to struggle with the notion of the cursed sword, though. He can hit people with the “flat” of his Ebony Blade, but the temptation to use it to kill is something he has to fight constantly. If I were him, I’d get Dr. Strange or someone else magical to break the curse. Still, using a sword in a comic is always something dangerous because, like the Human Torch and fire, a parent might worry that his or her child would take a knife or sword and start stabbing others with it. I’m going to be very interested to see how this is handled here.

Still, it’s so good to see the Black Knight back in his own book again, and I’m really anxious to discover what this creative team will make happen! After all, since Hawkeye made it possible to have titles focusing on individual heroes/characters again, I’m hoping that Dane and his crew will blossom into the kind of book I’ve long been hoping for, a terrific vehicle for a character I’ve been fond of for quite some time! Go, Black Knight!